Tarpon fishing in the Caribbean

I consider myself very fortunate in the fact that not only is my wife Dutch, she's Antillean, born in the ABC Islands.. Curacao to be exact. For those who are unfamiliar with these islands they're located in the southern Caribbean Sea, off the Venezuelan coast.

On average once a year we visit her parents for three to fours weeks at a time. Now don't get me wrong, it's a wonderful place with plenty to see, picturesque white sandy beaches, etc, but I'm not a person who can lie on the beach all day.

Once you've visited and toured the island that's kind of about it for me, so what else keeps me busy?. Well the nightlife and bars are excellent, but I can only nurse so many hangovers!.. however, there is of course the fishing!!

The sea fishing here is all bluewater fishing, large big game boats can bee seen powering into the distance or trolling the drop-offs around the island. Trolling just doesn't appeal to me, especially if you experience a quiet day.. it's just not fishing. I'm the sort of person who likes to hunt down or stalk his prey. Oddly enough shore fishing is not promoted here, yes there's the locals throwing in hand lines, but from a tourists point of view it doesn't exist! 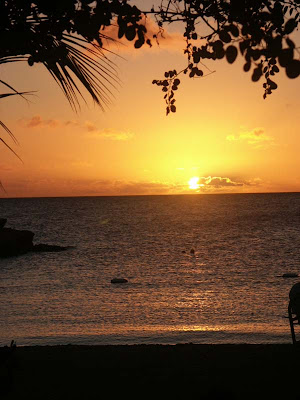 This had its advantages and disadvantages, the bad bit being there was no real experience to pull on, nothing on the internet and very little information available locally. However it was a good excuse to purchase some travel rods. After much research I settled on a Greys Missionary Spin, A Mike Ladle Surespin and an Ugly Stik boat for the odd trip out to sea. The first two rods covered the heavy and lighter spinning options, though they would also cover float and ledgering when required. The reels of choice were Shimano Baitrunners filled with various strengths of braid.

Just as well that it's not all about catching fish!, as I blanked for the first few outings with only the odd knock on a lure to show it all. It's frustrating though when you're watching big tuna hitting baitfish 400m offshore.. how I wanted to have my kayak! 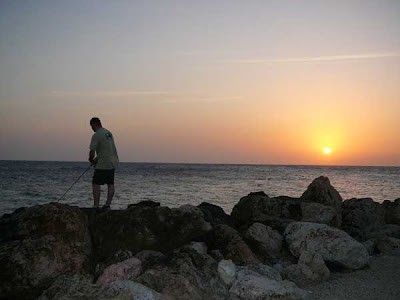 One venue in particular looked promising. From the rocks I could clearly see large fish chasing baitfish, sometimes right under my feet. Christ, could those fish move!!, I've never witnessed such speed. I identified them as a Permit fish of sorts, though despite my best efforts I only managed two strikes from these fish before they moved offshore. What a pity as they looked a good 15lb+ 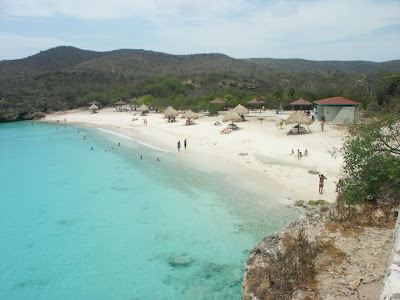 
The tarpon were my main target, they seemed to be everywhere, though they we proving so difficult to catch. A few swirls around my lures was about a much as I seemed to be getting. A swap over to some locally purchased deadbait saw a few short runs before the bait was promptly dropped... so damned frustrating!. 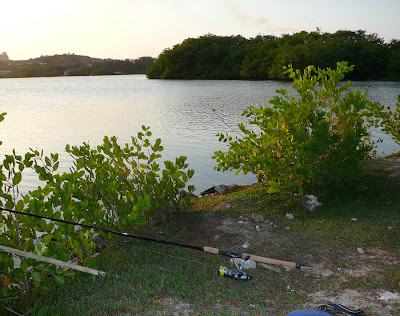 Probably more by luck I stumbled across a method that worked, boy did it work!. As mentioned earlier these lagoon are joined by pipes below the road, about a metre in diameter, normally 3 together, side by side. As the tide flow and ebbs there's a current flow between the various lagoons. Dropping a bait suspended beneath a float saw the bait drifting off into the lagoon.
This proved most effective at dusk, fishing into the night. With a chemical light on the float it was clearly visible for 150m or more. The fish hit the bait from anything from 20m to over 100m into the flow which dragged the float towards the centre of the lagoon. The hits were normally vicious followed by long hard runs which regularly saw the fish leaping well clear of the water.


Initially the fish were quite small, 3-4lb, but on light tackle it was great fun. 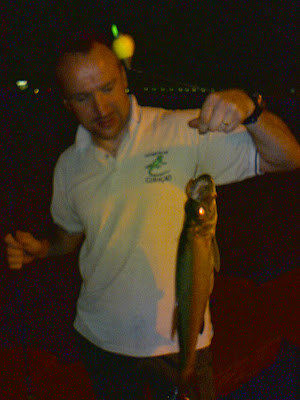 The fish increased with size as the evening passed by peaking out around 15-20lb. Not large by tarpon standards, though on a light spinning rod designed for bass and pollack they were proving tremendous sport. 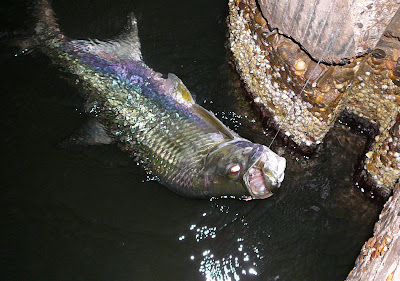 My evening was drawing to a close when just before midnight my good wife called requesting my presence at home. On hanging up a fish hit the float deep into the lagoon. The first run alone took a 100m of line, within minutes I found myself somewhat helpless with not much of the 20lb braid remaining on the spool. An hour passed and I'd not had a glimpse of the fish, it was still far into the lagoon and I was chuffed I'd manage to retrieve a small amount of line back onto the reel. After 90 minutes I had a brief glimpse of the fish about 50m out, it seemed huge!.. I guess it saw me as I immediately lost another 80-100m of line in yet another powerful, unstoppable run.


On a couple of occasions I bought it within metres of the shoreline before it disappeared once more towards the centre of the lagoon, I grabbed a photo at this moment as I couldn't see myself landing this fish. 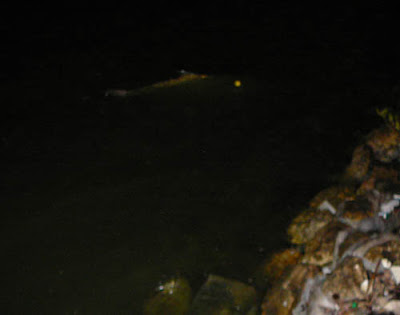 After two hours the fish was tiring, making slow runs on the surface, so much so I could see it's tail slowing flapping, accompanied by a Zzz.. Zzz.. Zzz.. from the reel, such a powerful fish. It took me just over three hours to get this fish to the shore, what an absolute cracker!, considering the tackle used it'll probably rate as my best ever catch 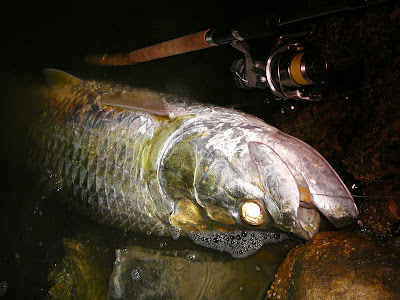 The 80lb trace was heavily frayed, it snapped like cotton when i beached the fish which lead to a heart stopping moment as the fish slipped back into the lagoon. With the fish quickly recovered a photo was taken (clearly I didn't even have time to remove the garbage!) 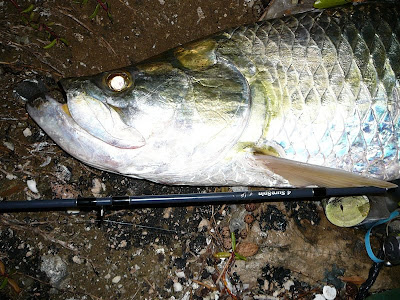 The fight lasted over 3 hours!, the fish was exhausted and took 10-15 minutes to revive prior to release. Give or take an inch it was 5' in length, I've no idea what it weighed, but what an evening/morning!!
Please feel free to comment.
Email ThisBlogThis!Share to TwitterShare to FacebookShare to Pinterest

Hell's teeth - that's some fish! If you'd had that on the end of the line while on the kayak it'd have took you with it! Great catch.

My guess is that the Tarpon weighed about 85 pounds. A sixty inch fish might have gone 35 1/2 inches in girth - close to 85 pounds and quite a catch from shore on the lightweight gear you were using! Congratulations!

Thanks for the comment Brian, it's nice to have a better idea of its weight.

Nice blog btw, I've added you onto my list.

I've been reading your story with an open mouth, to say in Dutch; ge-wel-dig!! I am a fisherman myself and am strolling the Curacaoan waters as often as I can, with pretty good results. Not as gopod as your huge fish, but pretty good in numbers...The one picture above, wher youc an see the grass with your rod, just before dawn, where is that spot exactly? It looks like the water along the Emancipatieboulevard, wher all the cars are passing you buy, near the Albert Heijn Supermarket and the Amstel brwery...is that also the place you caught your prize-fish? If you are ever around the island, feel free to contact if you have any questions!!

Hi, yes, it is next to the Amstel brewery. I have fished a lot on the main road close by where the pipes run beneath the road. The area close to the traffic lights is ok, though I prefer the mark further back close to the brewery.

hey rob, what a great read and congrats to this awesome catch on this light tackkle.

especially for me as i just arrived on curacao and was thinking where to go for fishing without doing a deep see fihing trip as this does not apply that much to me either. as you do, i like the fighting on lighter tackle very much.

can you share some more information on tackle, bait nand rigging and where exactly you did the fishing here on the island?
i brought some light fishing tackle as well and i am keen to go for some tarpons or jacks here as well. do you know somebody here in curacao I can get in contact with to go out for some shore- or even kayak fishing together?

thanks for your reply in andvance
stefan (germany)

i just arrived on curacao and brought some light travel gear as well.
i am looking for somebody who might look for some company while fishing and could take me out to some nice spots. i am living in st.rosa.

would be nice to hear from your.
all the best and tight lines.
stefan (germany)

Hello Rob,
Nice story and thanks for the tips.
I will be back op the island is september en wil try the spot near the brewery this time.
Last year we stayed for a week in the Hyatt on the eastsite.
I have been fishing on the floating walkway and had some nice fish there.
Maybe I read over it but what sort of bait are you using?

For guided tours on tarpon and snook in Curacao please visit my site.
tarponfishingcuracao.com