The constant struggle against the poor weather continues, today I hopped in the car heading off on the school run with the dashboard thermometer showing –4 degrees, deep joy.

There was a lull in the wind on the 2nd of this month, ideal really as the New Year’s alcohol had been purged from my system. I’d arranged to meet up with Dave and fish the Blue Anchor area of the Bristol Channel. He’s rather fortunate in living half an hour or so down the road, for me it was a three hour journey.

Winds were forecast to be light westerly's, decreasing as the evening progressed. Ninety minutes into my journey the ice warning illuminated on the dashboard, the temperature had dropped to freezing point. On arrival it had slipped down to minus one.

After a bit of a chat as to whether we should go for it or not we started to rig the kayaks. Dave was itching to field test his new Garmin 451s GPS Combo, all colour featuring the latest G2 software. I must say that it looked quite impressive, I’m sure it’ll serve him well. 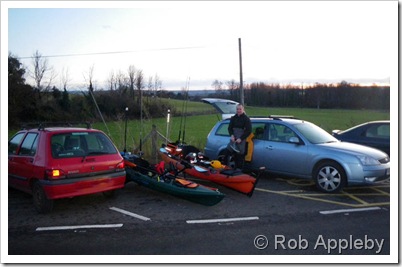 It transpired that this was to Dave’s first night trip, he was all organised, stern lamps, etc.. I’ve got to be honest, conditions probably weren’t ideal for a first night trip, freezing temperatures and a slightly lumpy sea. That being said, he was very familiar with the mark, plus had me for company.

We were soon anchored and fishing in about ten metres of water. The tide was a big spring of 11.7m and it was pushing past at a good rate of knots. I normally fish with 4oz of weight on the flood at this mark, I found myself using 8oz at one point just to make sure I was fishing hard on the bottom.

It was soon dark, and for me at least the fishing the extremely slow. I’ve previously found that this mark doesn’t fish well for me wish a bit of a swell running. I’m not to sure why, I think it may be down to the braid line moving the lead/bait around too much as the kayak rises and falls in the swell. I try to overcome this by fishing the bait well down tide of the kayak, though I can tell by the movement of the rod tip that the swell it was still having an effect. 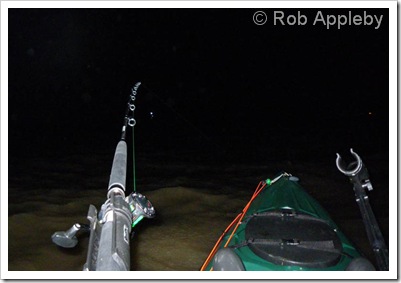 The photo above is of Dave on his Prowler 13. I only took one photo that evening, mainly due to the cold, plus I didn’t have too much to photograph!. The static temperature during the trip fell to minus two degrees, factoring in the westerly wind of 10-12mph, that put the wind chill factor at around minus seven degrees !

Despite wearing three pairs of heavy wool socks on, I eventually lost the battle to keep my feet warm after about three hours. I really hate cold feet, I’m going to have to try some different socks or liners to see if I can overcome this problem. The problem is similar with my hands, though I wore my waterproof ski gloves all evening which enabled me to keep fishing. Though at times they did chill off, but with the gloves, or with the use of the hand warmer pockets of my PFD, I managed to keep them sufficiently warm.

The fishing slowly picked up, it seemed to coincide with a slackening on the flood tide. I managed a couple of strap conger, a small thornback ray and an very small codling. It’s certainly better than blanking so I’m not going to complain. 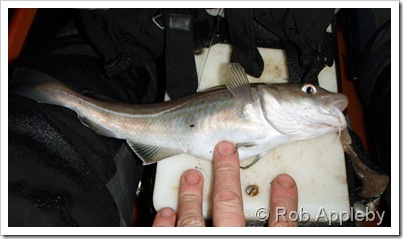 I heard a couple of cheers during the evening so I knew that Dave had caught something decent. This was soon backed up with a radio confirmation. He managed a couple of very sizeable Thornback Ray to double figures, at least someone was finding the bigger fish! 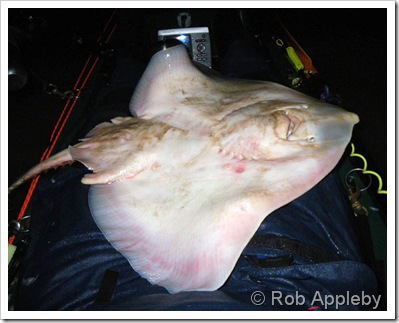 After about four hours on the water the tide turned onto the ebb. After a quick chat on the radio we’d established that we were both well and truly frozen solid and were happy to call it quits. Typically the wind eased off at this point resulting in a flatter sea, in fact a very nice evening. The sky was almost free of clouds and it was a beautiful full moon making a night fish pleasant, well if it hadn’t been for the sub zero temperatures it would have been very pleasant !

Carting the kayaks back to the car when you can’t feel your feet isn’t the best feeling in the world, stripping out of your drysuit and thermals back to your underwear is refreshing… a warm fireplace and a glass of Drambuie was on my mind at this point in time.

After about an hour of driving home in my socks the feeling was fully back into my feet, ah, the joys of winter kayak fishing. Dave’s first night trip was a total success with a couple of cracking fish to show for it. If the cold weather continues, and it’s forecast too, I’m guessing that my next couple of trip will be daytime trips with little wind. Now all I need is that weather window.

I still need to figure out how to keep my feet warm as well. Insole foot warmers were no help, but were nice once I was back to the car. I'm jealous. Still planing my first 2010 trip. I just finished installing my first fish finder, so I'm eager to see how it works!

has anyone tried heated insoles ? i,ve been lookin at them for use on my enduro bike and if i could use them with my yak that would be great.
Also i do have a charcoal hand warmer which is great, you can get them from the likes of blacks etc.

I sometimes take a couple of charcoal handwarmers out with me. Great when they're working, though mine tend to go out from time to time. It may just be down the the manufacturer of the fuel sticks themselves.

I've been looking at the Peacock handwarmers that run on lighter fuel. Not cheap, but they seem to receive excellent feedback.