The crows were somewhat kinder to me on the third day, it was nearer six o’clock before the dawn chorus wrenched me from my deep sleep. I’d woken once or twice during the night due to high winds and sporadic showers buffeting and lashing into the tent… that’d be the predicted weather front moving through !

I crawled out from my tent at around 8am and the wind was blowing hard, it seemed that we’d be departing Wales earlier than planned. We headed down to the launch site and wandered over the dunes to view the sea. There were a few white horses, it was actually far better than I’d expected. That said, I wasn’t too happy due to the wind so we retired back to the car and fried up several bacon buns, that part of the day went down a treat.

Bizarrely enough, once breakfast was finished the wind had almost collapsed to a mere breeze. With raised spirits we rigged and headed out sometime around 11am. We were soon anchored and fishing, the weather was great and hopes were high.

However, the now increasing offshore breeze seemed to be having a detrimental effect on the fishing. There was a distinct lack of fish, in the first couple of hours I’d only registered a couple of knocks and one dropped Bullhuss. I then hooked into what at fist seemed like a snag, though with a firm pull it came free. There was quite some weight on the end of the line, though it was dead weight. I was thinking large piece of weed or rock, etc. I was quite surprised when a very large spider crab came to the surface. I’d picked one up a couple of years ago when fishing at Tywyn, though this one was quite the specimen! 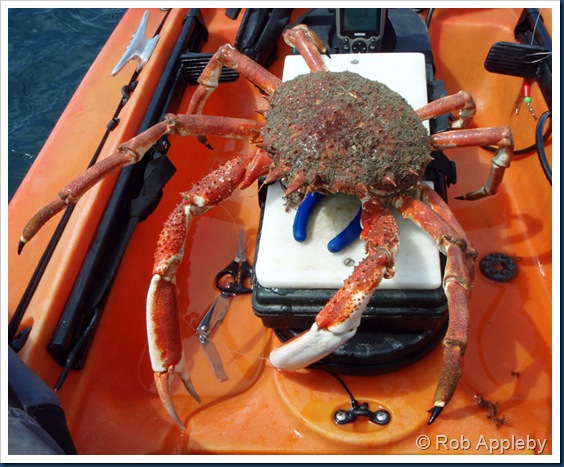 Things were slow, very in fact. I spent most of the time horizontal managing a few moment of sleep here and there. 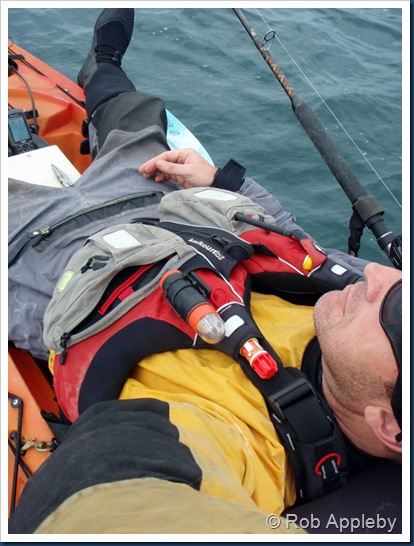 Sometime after midday the reel clicker sprung to life followed by me a second later. There were a few tugs on the bait followed by a long steady run, not a screamer but it kept going. I flicked the lever drag into gear and the rod bent over into what felt like a good sized with. The fish made a few good runs before settling deep under the kayak. It suddenly felt quite different as I pumped the fish towards the surface. When it appeared it was immediately obvious as to why it felt different, it was hooked close to the tail!. I reckon it might have spat the bait during the fight, catching its tail as it swam off. It’s certainly not the way you want to catch a fish, though it took my tope tally to four.

I managed a couple more Bullhuss during the remainder of the afternoon though it was extremely slow, rather disappointing to be honest. 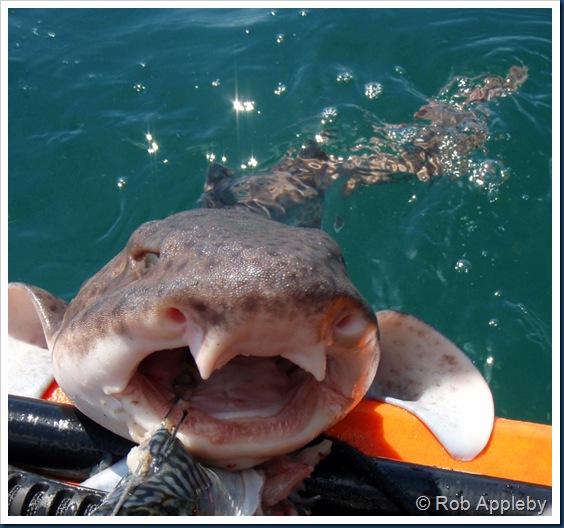 We called it a day around 5pm and dragged the kayaks upstream towards the launch site for the final time. Once all de-rigged and packed away we started the 4½ hour journey back to Somerset. The Welsh roads are incredibly slow to drive along, the first 100 miles took 2½ hours, and that was with virtually no traffic whatsoever.

It’d been a busy three days. We clocked up over 20 hours on the water and I managed four Tope and over twenty Bullhuss. It would have been great to have caught more Tope, though it could have also been a lot worse. It’d be nice to manage another trip later this month, though it all depends on the weather and my powers of persuasion over my good wife!

Nice fishin Rob.
Did you take any of the bull huss home? Nothing like a bit of rock salmon & chips!!

Nah, nowhere to keep the fish fresh enough to be honest, plus I prefer a portion of cod or bass :)

Hello Rob,
Ive been reading for a while. Just found the follow button. I enjoy the reports and tips.
Good fishing to you!

Hi DeMatt. Pleased you enjoy it, you certainly catch some nice fish yourself, great site !