Day 2 commenced at around 0500 when the dozens of rooks in the trees overlooking the tents burst into cackling, what a racket!. I’d forgotten my pillow so a pair of rolled up jeans were making a very poor substitute. Though to be honest I was too tired to complain much and dozen off for another hour.. or two. Anyway, once up we picked up some sandwiches from the local shop and collected some frozen mackerel from Barry’s Tackle in Tywyn. Once again we were soon anchored up and fishing.

I think we were on the water around ten o’clock and fished the remainder of the flood, the tide finally turning around midday. Three or four other kayak anglers joined us and from what I could see, there was a steady stream of Bullhuss coming to the kayaks. 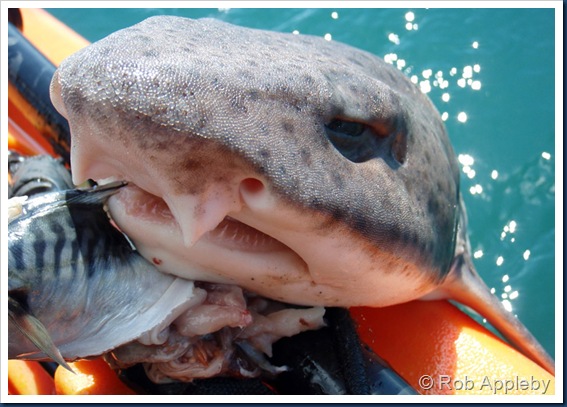 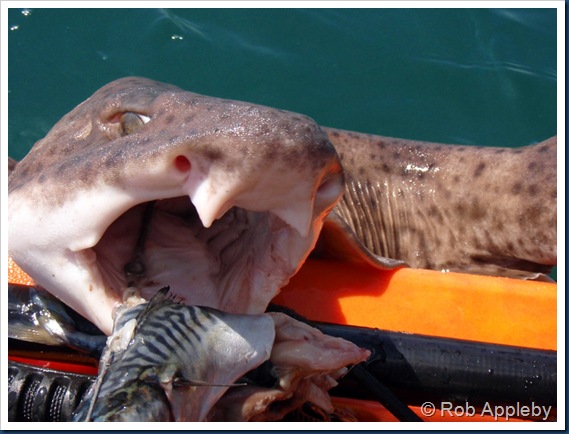 I’d kept one rod rigged with mackerel feathers, with the lower two baited, bouncing over the side of the kayak in the hope of collecting some fresh bait. The previous day saw me pick up two Dogfish, far from useful as bait. I’d heard that the mackerel were six miles offshore and that did indeed seem to be the case. I did eventually pick up a single mackerel which was promptly lip-hooked and sent to the depths. It swam around quite happily for 20-25 minutes and despite getting agitated at times it failed to produce the goods. At this point is was clearly embarrassed at its own lack of success and promptly died on me. I re-hooked it and sent it down for a decent sea burial. Well what it couldn’t manage in life it managed in death. Within moments of hitting the sea floor line was screaming off the reel. I gave it 4-5 seconds before flicking the lever drag into gear.. fish on!

It turned out to be the best fight I’ve had with a Tope to date with it making several runs before I came under control. Twice it came to the kayak though it was too green on both occasions and took off again. Third time lucky and it came onto the yak. It was a nice sized female hooked tightly in the scissors. After posing for a few photos it was released to fight another day. 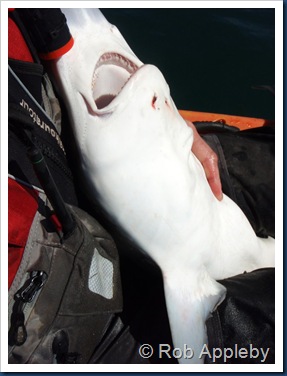 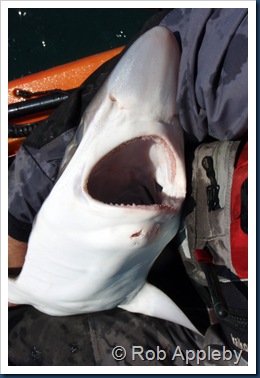 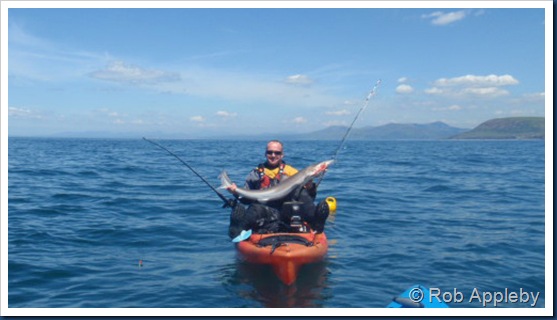 The previous year I’d endured several dropped runs, in fact I had 5-6 runs back to back that I failed to hook into. Despite varying the ‘strike’ time the result was always the same. I say strike as I don’t strike into the fish, merely engage the lever drag and let them hook themselves. I’d read in a couple of older fishing books that tope, etc, will pick up a fish side of and swim for a while before pausing and turning the fish to swallow it.

With that in mind I changed the way I hooked my bait. Instead of hooking through the nose, I threaded the hook through the nose and hooked into the bait halfway down the back.

The theory being that I was far more likely to hook the fish if it was indeed holding the bait side on in its mouth. My last eight runs have resulted in eight hooked tope coming aboard the kayak, which for me is a greatly improved success rate.

I bought a large Bullhuss to the kayak and it was quite deeply hooked, though it was removable. I held it next to the kayak whilst I removed the hook. I the blink of an eye a near perfect mackerel appeared on the edge of the kayak. I actually gave it a double take as I hadn’t noticed the fish regurgitate it. There was a neat semicircle of teeth marks on either flank of the fish where it had been picked up side on. Clearly it had been then been flipped and swallowed whole!.

This did indeed seem to prove exactly what I’d read previously, thus the improved hook-up rate does seem directly linked to how I rig my bait. During the un-hooking process another whole fish was spewed onto the kayak, though this one was bright red and lacking any skin. The Bullhuss must have been around 10lb in weight and it has easily swallowed two large fish whole, quite impressive.

I managed a further two Tope as the afternoon progressed, nothing sizeable, perhaps 15-20lb, though good fun all the same. The Bullhuss just kept on coming and we fished on until around 7pm. 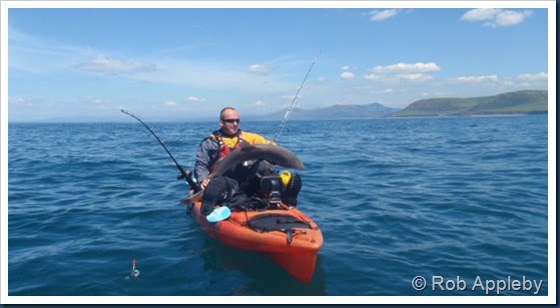 The paddle back in was uneventful, though with the tide around low water the kayaks had to be dragged back upstream to the launch point. It’s a little tiresome, there’s certainly a lot to be said for coming back in towards the top of the tide.

It’d been a good day for me with a total of three Tope and well over a dozen decent sized Bullhuss. The weather had held well throughout the day, though there was a weather front due to pass through the area anytime. With the second days fishing concluded we headed back to base camp and conjured up a large pot of chilli. Finishing the second bottle of cider coincided with the crows quieting down for the night, after nine hours on the water I was more than ready for my bed !