Well as they say there’s no rest for the wicked!. The night before had been spent at the ‘Bar Fly’ in Tampa, an absolutely cracking little bar themed around fly fishing. There’s an area where you can sit and tie flies, even purchase flies and associated gear. There’s also various publications to read whilst fishing TV runs in the background… cool or what! 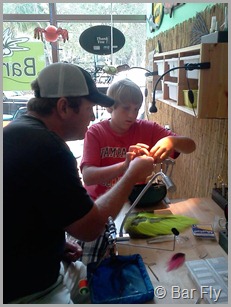 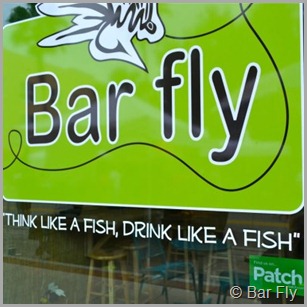 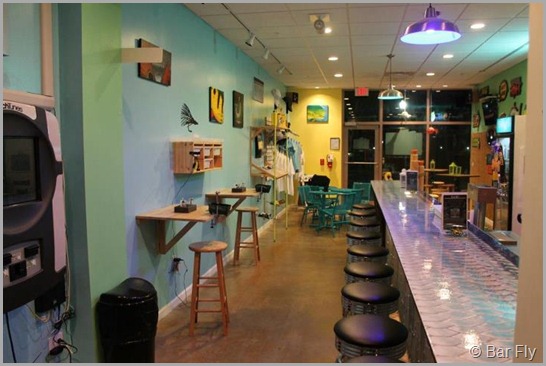 It wasn’t the last night that I spent there, a truly classic spot to hang out with liked minded folk.

Day two in Florida saw the alarm going off at 0430, hmmmmmm. It was another early start, hitting the road just after five. A quick pit stop to top up with coffee and doughnuts and we were heading sound to a new venue, the target species were once again snook, trout and redfish. The launch sites seem to have pretty much one thing in common, ease of launching. Swing off the road, reverse the pickup to the launch spot and slide the kayaks off right next to the waters edge. That’s something that’s very rare for me, it’s normally a case of parking up two to three hundred metres away and carting the kayak down to the launch site, often over tricky terrain.

It was another dark start, though the kayaks were quickly rigged and we pushed off into a narrow channel that led up to a large area of somewhat enclosed water. The water here was shallower than the previous day with an average depth of less than a foot, though this was due to increase with the flooding tide. The fishing techniques were the same as the previous day, alternating  between top water and spoon. What I didn’t mention from the previous day was the mullet. At times these fish become extremely active, jumping clean from the water whilst moving around in large shoals. It’s very common to spook a shoal whilst paddling, resulting in a flurry of activity or disturbed water as they move away. It’s all signs that you start to watch for and the advice I was given was watch out for the mullet, their presence being a good sign that other species will be in the area.

In places there were large oyster beds, exposed at low water, though disappearing from view as the tide rises. They’re certainly something to watch out for, one for potentially holding fish, also as a potential fouling hazard for the kayak. The first hour or two was spent trying various areas around the mangroves. Despite a couple of hits I’d failed to hook up at this point. As the water level rises the fish move out onto the flats and you can cover a lot of water whilst fishing on the drift. It’s interesting to look at the type of ground that you’re drifting over, lush sea glass with sandy patches and holes, the latter being a good fish holding feature.

One of the forum guys, Marty, had located a school of Redfish and called me over to have a cast at them. I headed straight over and dropped my stake out pole. Following his advice I cast past the area he’d highlighted and worked my top water lure back towards the kayak. I watched in amazement as a strong wake appeared a few yards behind the lure, accelerating rapidly towards it. The back and tail of a fish broke the water and a couple of seconds later the lure was hit hard. I was hooked up and line stripped from the reel. With some line recovered I bought the fish towards the kayak only for it to shake the hook free. Sure it was disappointing, though exhilarating at the same time!

I failed to get any further interest in my lure so I moved to another spot and drifted over a particularly sandy area. The top water lure was hit hard and I found myself hooked into something quite lively. After a couple of minutes a small Snook came aboard the kayak. 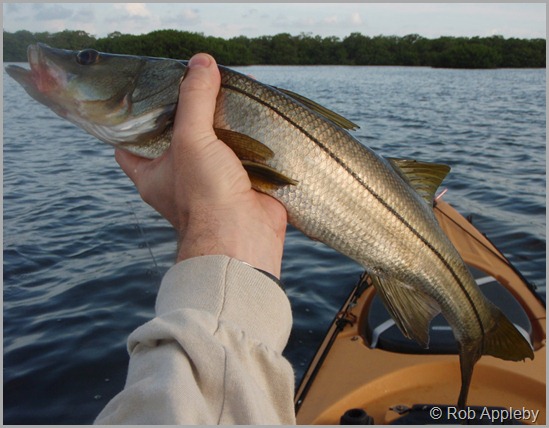 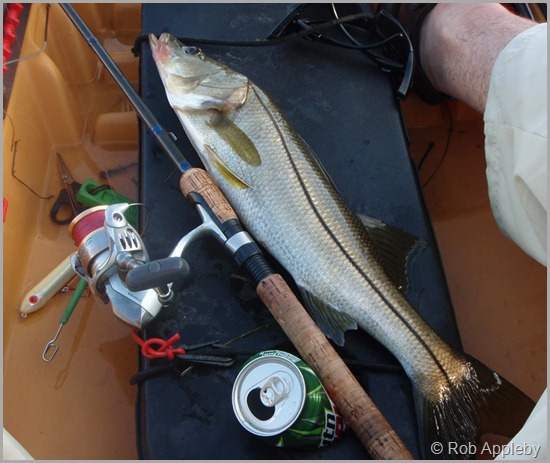 I continued to drift this ground and about thirty minutes later I found myself hooked up into another Snook. This one was a little larger and gave a good account of itself on the light tackle. They’re not a fish to be hurried, it’s just a case of enjoying the sport until the fish tires. The last thing you need is a very lively fish thrashing around with a couple of treble hooks firmly attached! 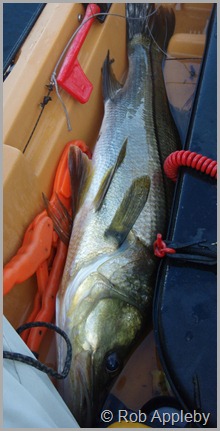 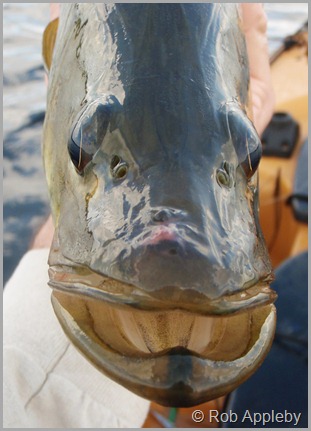 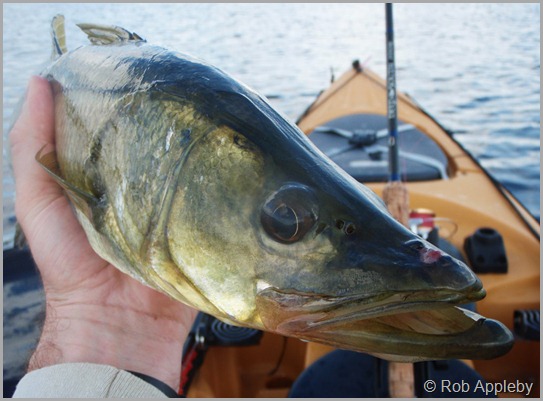 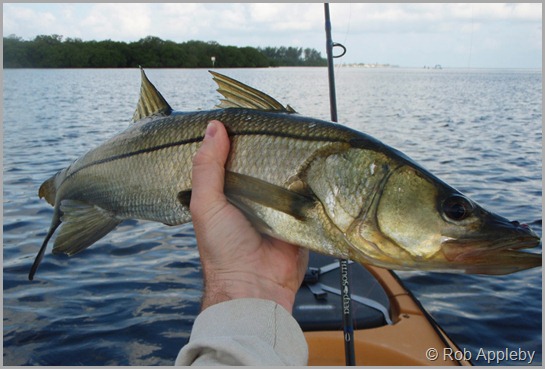 There was a lot of grass floating on the surface making fishing with a top water lure a little tedious at times. I’d often only manage a few metres of a retrieve before the lure would pick up some grass killing the action of the lure instantly. It’s something I quickly became aware of, the feel during the retrieve changes immediately and it’s then a case of getting the lure back quickly, cleaning off the grass and flicking it out once more. This became rather repetitive so I made the decision to swap over to the spoon. At least this way I kept clear of the floating grass and was maximising my fishing time once more.

After a few nips at the spoon I was hooked up into something small and trout was soon lifted into the kayak. Yup, it was not going to break any records, though it was another species for the day.

Now there’s a thing in Florida called a ‘Slam’, basically it entails catching a snook, trout and redfish in the same session.. I was close!. A ‘grand slam’ includes the capture of a tarpon, well I can dream right!

I thought I’d get tired of lure fishing for several hours at a time, though the outfits are lightweight and that problem never arose. Apparently sight fishing in the way ahead, though with a chop on the water this was proving very difficult. There was of course the option of standing to sight fish… in a Prowler 15?, not happening!. It was a case of working an arc whilst drifting over the water, covering as much ground as possible.

By mid-morning the fishing seemed to have quieten off, I’d missed a few fish, though I was just enjoying nosing around the mangroves and drifting over the flats. Mark called up to say he’d caught a decent and Redfish and that I should head over to his location. I was soon on scene and decided to try the top water lure once more. I missed a couple of hits though it wasn’t too long before I found myself hooked up into something particularly lively. After a few solid runs the fish quietened down and headed in the direction of the kayak. It felt quite different to anything I’d had before so I made a point of not rushing it. I was pleasantly surprised when a nice Redfish came alongside the kayak. The lip grippers were put to good use and the fish came aboard… I had my first slam!

I managed a couple more trout as I fished my way back to the launch site, drawing another great day on the water to a close. Standing the shallows whilst waiting to drag the kayak out of the water I was amused to see a pair of mating Horseshoe crabs scoot past underwater, not an everyday sight for me!. Every so often tiny crabs would board the kayak, quite often several at a time, quite bizarre. 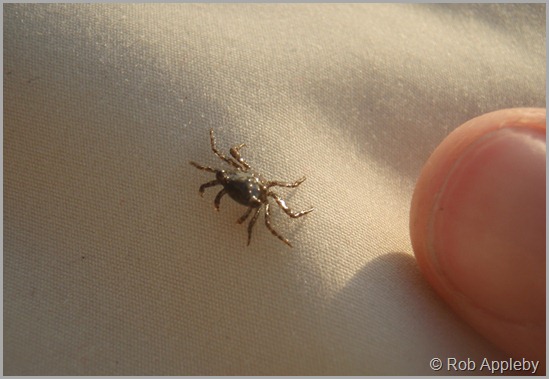 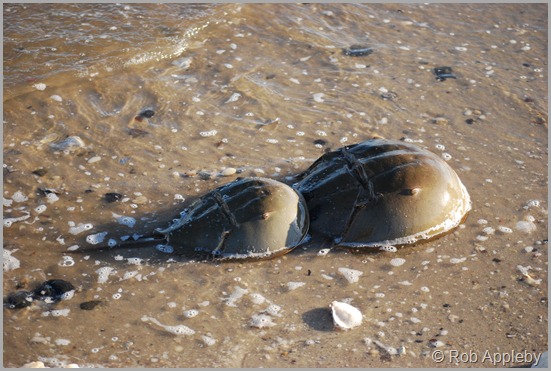 I can’t remember where we all headed to for lunch, but like all the meals I experienced during the week, it was excellent!. It’s a novel experience to hop off the kayak, pants and sandals somewhat wet, and to be sitting down in the same attire for lunch moments later.. it’s just not British!

Great Article Rob.
I use the similar methods in Cornwall. Go out with four 7 to 8 ft spinning rods loaded with different lures, such as plugs, Savage Sandeels, Savage Sandeel Slugs etc making it easy to quickly swap methods. Mainly drift over shallow rocky ground close in to pick up Bass, Pollack and the occasional Sea Trout. Works well and great fun on light tackle.