Well after the first day of submitting an empty score sheet, there was clearly some room for improvement!. The biggest issue was learning and understanding the techniques required to catch these elusive Largemouth Bass. The previous evening had seen me asking questions and gleaning whatever pieces of useful information from various competitors, specifically those folk who were either experienced or had enjoyed some success.

One of the American chaps I ended up chatting to explained to me the art of Flipping. Now as much as accuracy was clearly required it, on paper at least, sounded doable. I decided to have a go with this method the following morning. It was a late night and an early start, getting up around 4am after not much than 3 hours sleep, not ideal!. After a quick breakfast we were back on the road heading towards Lake Fayette. Once on scene we set about rigging up, eagerly anticipating the day ahead. 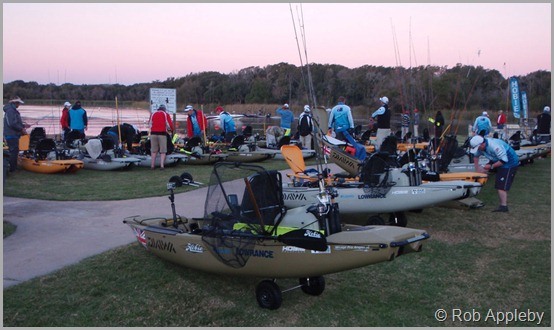 I’d no previous tournament experiences, etc, in countries like the USA and Australia the kayak tournament scene is well established, in the UK this is not the case. Checking in on a morning, being tagged out, getting you photograph authentication card updated to reflect the current day, etc was all kind of alien to me. I’d lost my check in tag the day before which didn’t impress the officials too much, yup I needed to get my head around the procedures and routines, it wasn’t just about the fishing!.

I was soon rigged up, rods rigged for top water, flipping and crank baits. The fish finder batteries had been replaced with a fresh set and my packed lunch collected, I was good to go!. The official launch was at 0730, though prior to that just about everyone stood for the National Anthem. 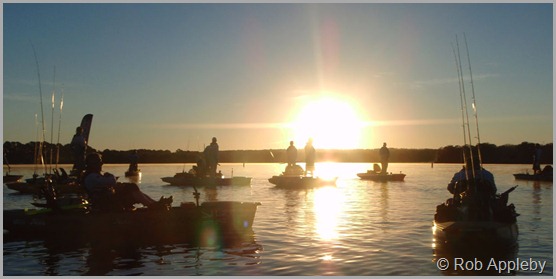 With the National Anthem completed the countdown for the launch started and a minute or two later we were off!. It is a cracking spectacle, laughs and cheers, dozens of kayaks powering out into the lake, what a great atmosphere. 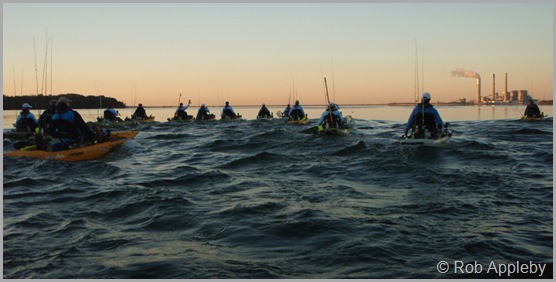 So the game plan was to start the day with some Flipping. Armed with my bait caster setup and a lightly weighted soft plastic animal imitation I attempted a few ‘flips’. What a disaster, birds nests, one after the other. I ended up snagging my lure and losing the lure and leader. It really had been a dumb idea, trying something completely new and unknown during a competition day. It’s the sort of thing that needs research and practice to gain some proficiency first, what had I been thinking of?!!.

Needless to say I was rather frustrated and angry and stowed the bait caster and peddled away into a new location. I executed a tight turn and immediately managed to get well and truly stuck in some dense submerged weed, the Mirage Drive was clogged up and not working. I yanked the drive out and grabbed the paddle, pushing myself out of the weed bed. In the thirty minutes I’d been afloat all I’d managed to achieve was several birds nests, a lost lure and getting myself stuck in a weed bed… no further comment.

My original game plan, prior to the inclusion of Flipping, had been to concentrate on fishing Senko worms along the bottom, fished Texas style. Basically this requires a light weight to be threaded onto the line directly ahead of the soft bait .

The above photo shows the hook point protruding, though it’s generally not pushed all the way through in order to allow it to be fished ‘weedless’. I’d just caught a fish on the above setup and grabbed a quick photo before preparing it to be cast out again. The weight can be varied as required, whether it be to increase casting distance, keeping it on the bottom on a faster drift, etc.

I set off around the headland and found myself a clean area with some minor structure and began to drift it repeatedly. I was soon into my first fish of the day and they just kept on coming!. Moral was back on a high and more importantly I was catching fish over the required 14” limit, there’d be no ‘NIL’ returns today!

Within a couple of hours I’d caught several fish, more importantly I’d achieved my limit of three fish larger than 14” in size. The pressure was off, I was now able to concentrate on looking for some larger fish to increased my total overall length for the day. I continued to fish the mark for a little longer though the majority of the fish were averaging 13-14” and I was wanting fish of 17-18”, perhaps even bigger!. With that in mind I headed off to drift around some sunken trees in the hope of finding a better stamp of fish. 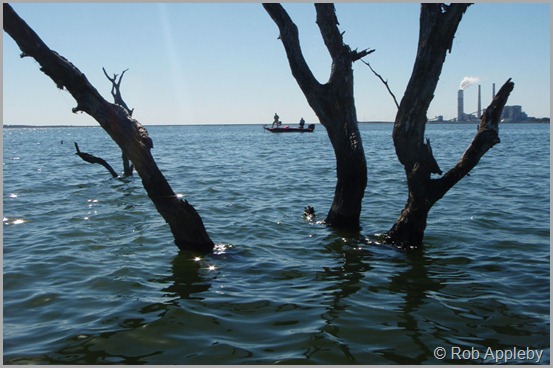 Fishing around the heavy structure wasn’t producing any fish for me so I chose to head off to another area of open water. I located a drift of around 200m in length which saw the water level change from 18’ to 5’. There floor was littered with some light structure, it looked fishy so I decided to concentrate my efforts here for the next couple of hours. As it turned out I spent the remainder of the day there!

There were plenty of fish to be had and the takes were at times quite aggressive. I was being hit by fish on almost every drift and was hooking into a high percentage of them. That said, the Largemouth Bass is a particularly lively fish once hooked they loves to get airborne. They’re rather good at throwing the hook and I was losing up to half the fish I was hooking up with. Both frustrating and amusing at the same time!

I later found myself hooked up with something that was clearly a good fish. Unlike everything else that day it went deep and stayed deep. It was constantly pulling hard, the rod bent double at times as it resisted my attempt to bring it to the surface. I was quietly praying that I wouldn’t lose this fish and when it came into view my heart was definitely racing, it was a cracker of a fish!. I patiently played the fish, not hurrying it to the kayak, though it eventually tired and I scooped it from the water with my net. Once safely aboard my priority was to measure and photograph the fish, the hook remained in until I had secured the required proof. As it turned out the fish was lightly hook in the lip and could have easily been lost, just not today!. It measured in at 21.25” 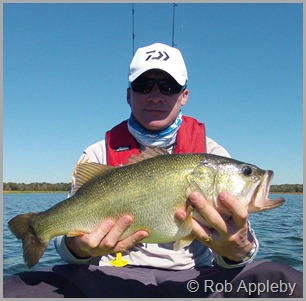 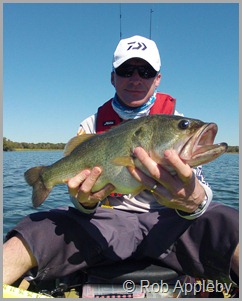 I continued to fish until I was forced to head back in order to ensure I was checked in on time. For every minute past the check in time, you lose 1/2” of your overall length should you have failed to check in on time.

At least I’d been more organised and having gained a grasp of the tournament rules, I was even able to return my check-in token!. It’d been a great day on the water, I’d landed over twenty fish, lost a dozen which had included some good sized fish. What a contrast to the previous day. Having changed tactics from trying a bit of everything to finding a technique that was working and sticking to it for the duration worked wonders.

On Day 1 I was joined by several others in last place, my Day 2 placing was 4th place with a total of 53.75”, pushing my overall placing to somewhere mid-table. If I was able to produce another good performance on the last day I’d have a good chance of being placed in the top half. Winning was not a real possibility, I’d blown any hope of that on Day 1. However, the chance of finishing somewhere respectable was still achievable, it was still all to play for. 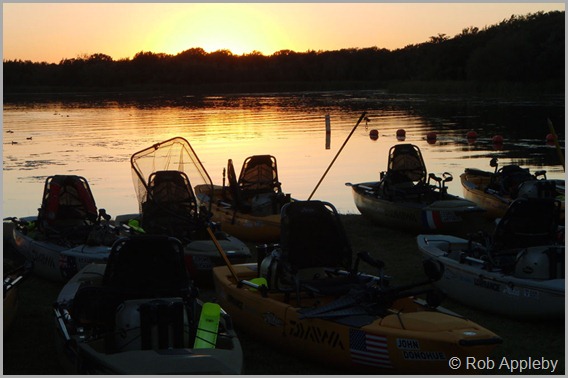 Great blog report Rob!! Awesome fish too! So great to meet you :) Hope we can share the water again someday!

Rob. If you intend to continue lure fishing in the UK don’t give up on the baitcasting outfit. A baitcasting rod with a trigger and baitcasting reel is great for comfortable one handed vertical jigging. I use that outfit for all my vertical jigging with lures up to about 50g and have had Cod to 12lb which is a lot of fun. Its so comfortable jigging one handed you can jig all day long.
For casting lures you are probable better off with the fixed spool outfit however, if you do use the baitcaster tune the breaking system to the weight of the lure i.e. set the breaks so when the lure hits the ground from shoulder height there is no overrun and you should not have problems. Distance is not usually and issue casting lures from the Yak. No doubt you know all of this anyway but just in case.
Great recovery!

Hi,
I've a couple of baitcaster setups at home and I'm happy with setting them up and can whack a lure out quite happily with a conventional overhead cast. The way it was explained to me is that they flick the lure in using an underhand cast up against structure such as a tree. It was attempting a different casting method that I'd only had explained to me verbally that screwed it all up for me. I should have not pursued the idea and researched it when I was home after the trip.

Good place to practice flipping or pitching in the UK is to take your baitcasting outfit pike fishing from the bank of a canal or river and flip your lure to the overhanging growth on the far bank. Mind you from a kayak must be easier if you can stand up which I believe you can on the Pro Angler otherwise a short rod and sit side saddle must help but difficult I should imagine sitting down.

Keep up the good work.

I wish I would have checked your blog sooner, I have fished both of those lakes quite a bit. I used to do real good with zoom lizards. Also flipping jigs in black/purple, brown, and grey with a white twin tail grub trailer. Nice fish!