Thursday the 8th November was the third and final day of the Hobie World Championships. The first day had seen me placed joint last with no fish above 14” submitted, the second day had seen my take 4th place, what would the third day hold in store for me and the GB Team?? (David Morris and Ian Harris). I really needed to secure my limit and hopefully that’d include some decent fish above 17”, that’d give me a decent chance of finishing in the top half of the table.

It was another early start, up a silly o’clock, rigging the kayaks at around 0630 with the official launch time at 0730. I’d decided on a simple game plan, I was going to fish a Senko worm rigged Texas style over two particular areas of the lake, specifically the areas that had produced for me during the previous day. I was checked in early and sat  afloat for twenty minutes or so whilst the remainder of the anglers completed rigging, check-in, etc. 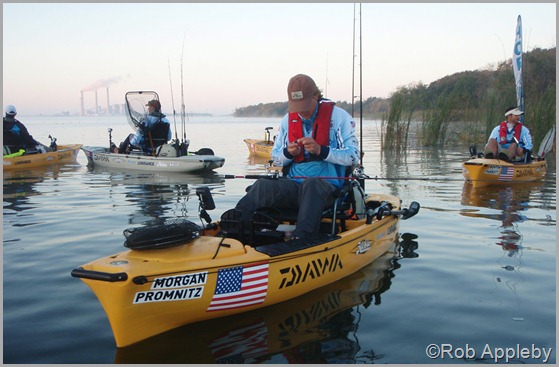 The morning was cooler than previous days and a light mist was hanging over most of the lake. It was particularly picturesque and I was keen to get out there and get fishing. Confidence was high, it’s amazing what catching fish does for your confidence!

At 0730 the starting horn blew and over forty Hobie Pro Angler 12 kayaks powered off into the mist. I hung back and let the crowd disappear, my chosen grounds were close by and I was more than happy for folk to push out into the lake before I commenced fishing.

There wasn’t much of a breeze and the drift was considerably slower than I’d have liked. Despite a few drifts, the first half hour proved rather fruitless, however, I’d experienced a couple of gentle hits to the lure, so I chose to persevere at this spot for a couple of hours at least.

As it happened I didn’t have to wait too much longer for my first hook-up of the day. It was particularly lively and felt like a rather chunky fish. I wasn’t disappointed when the fish came alongside!. I soon had it safely netted and aboard the kayak. The measuring stick was bought swiftly into action and the camera recorded the size.. 18½”, great start! 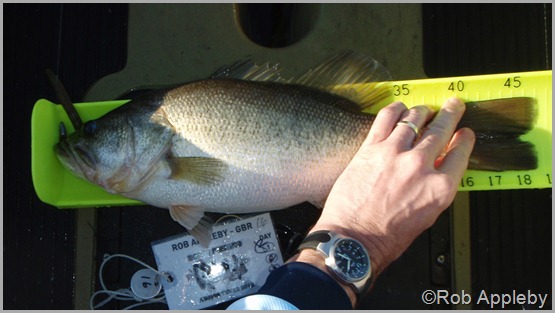 It wasn’t even 0800 and my first fish of the day was safely aboard, measured, photographed and returned. The initial pressure of catching a fish was off and my next aim was to secure my three fish limit. As I peddled off to start my drift again I heard a slightly odd noise behind my seat. I spun around to see my landing net a couple of metres behind the kayak, sinking net first with the handle up in the air at forty five degrees. It was a sad sight that lasted a couple more seconds before it disappeared from view. From now on I’d need to take extra care with any fish. I had some lip grips to hand so all was not lost (and they were leashed to the kayak!)It was approximately twenty minutes later when my worm was hit hard and I was soon lifting my second fish of the day onto the kayak. 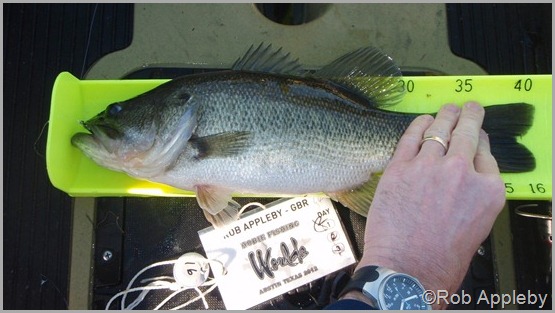 It measured in at 16¼” which was respectable, one more fish and I’d have my limit!. I only had to wait ten more minutes for that third fish, it was no monster at 15½”, but it was the all important third fish. It was photographed and returned at 0829, it’d taken fifty nine minutes to secure my limit, the pressure was really off and could concentrate on trying to catch some larger fish. 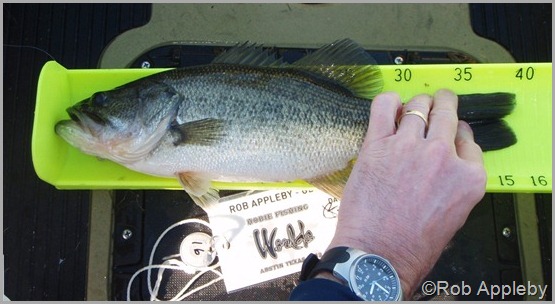 The fish continued to come to the kayak, though they were all measuring in around 14” and as the wind continued to increase the fishing action dried up.

Below is a photo of David Morris of Team GB adjusting his tackle, note the angler fishing up close and personal with a reed bed in the background! 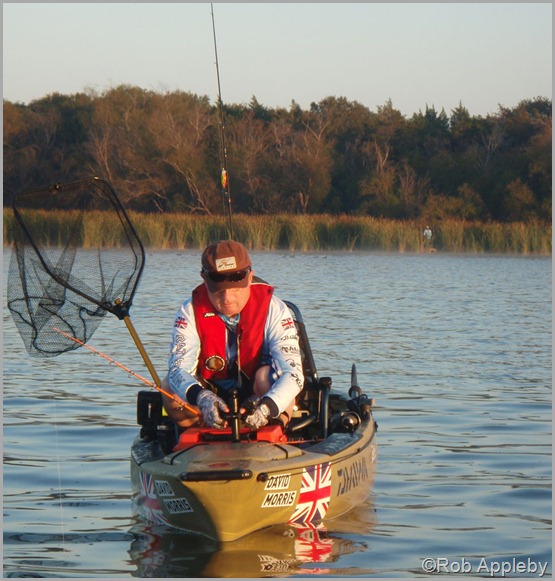 There was soon a light chop on the water with a scattering of white horses making an appearance. The Pro Angler 12 handled the chop far better than I expected. Sure, it’s a big kayak and you sit high up, initially it felt a little uncomfortable, though I soon adjusted to the handling of the PA12 and continued to enjoy the fishing despite the deteriorating weather. 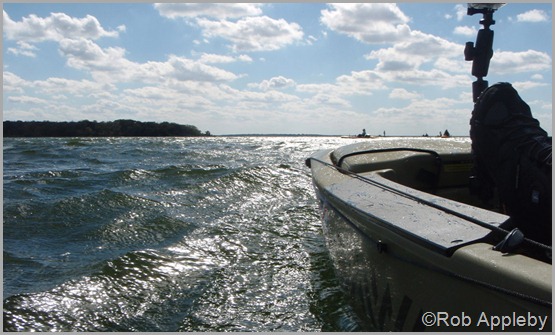 By midday I’d effectively stopped catching fish. I moved around the local area and tried a few more drifts, this resulted in a couple of under-sized fish, though that was about it. The wind continued to pick up and at one stage was blowing a steady 15-20mph. I powered the PA12 through the chop, the result being spray flying above my head and into my face as I crashed through the bigger waves, I couldn’t help but chuckle to myself.

As the finish time loomed I decided to call it quits a tad early and headed in. I drift fished as much as possible all the way into the launch zone, pulling and stowing my gear a hundred metres before I hit shore. Once checked in it was a case of submitting my catch return for the day along with supporting photographs prior to de-rigging whilst enjoying an ice cold Coke!.

Team GB faired fairly well overall, all thing considered. The Largemouth Bass were a new species for us (ok, I managed a brief session for a day in August), the techniques and end tackle were all new. The first day had been a steep learning curve for us all, though we put up a very respectable performance of the following two days. 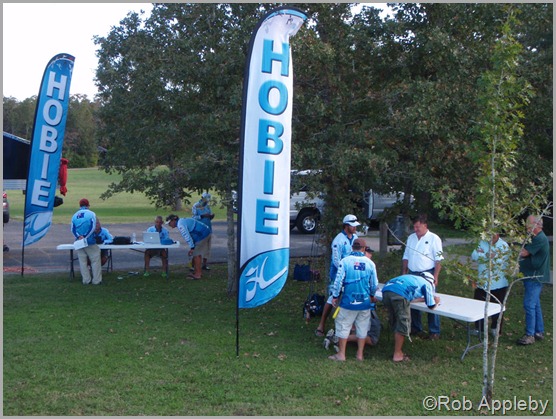 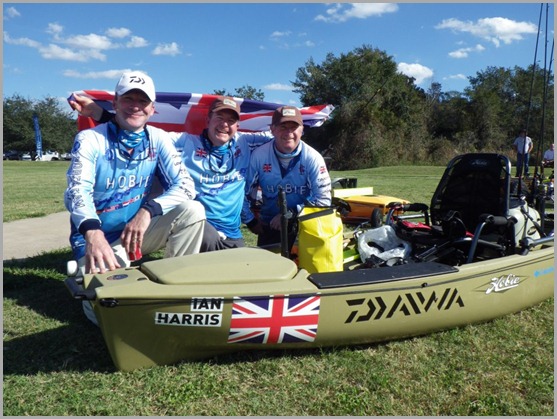 The Team GB results were as follows:

Considering the calibre of anglers present, allied with Team GB’s lack of experience with the species, methods and locality, I think it’s fair to say that we put in a very respectable performance!.

I’d like to convey a huge gratitude of thanks to the Hobie Cat Centre, Daiwa UK, Veals Tackle and Overboard for supporting Team GB for this event.

The Pro Angler 12 proved itself to be a very capable kayak and continually surprised me with an impressive turn of speed for a kayak of this size. It’s extremely stable and a fantastic platform to fish off. I think what surprised me most was how it handled itself in choppy water, it exceeded my expectation in most areas. If you fancy trying out a PA12 they’re available to take afloat and try at the HobieCat Centre, located at Poole in Dorset.

Amazing read as always Rob, thanks for sharing such a brilliant insight into the world of competitive bass fishing from a Hobie.

Well done to all of you.

That's a nice report Rob!
And actually i also think you did pretty!!!

Really enjoyed the report Rob. Hopefully the concern about a larger kayak with a very comfortable seat being a compromise against handling choppy water has now be laid to rest.
Our demo PA12 should be busy!