The first question is probably ‘why fit one?’. Someone even asked me if my kayak leaks. To answer the second question the answer is no it doesn’t, however, it may in the future. I’ve read plenty of horror stories or kayaks flooding and capsizing as a result. Why would your kayak suddenly start leaking?, after all it’s been fine for a long time. Well there’s always the chance that a kayak may get damaged during loading or unloading, whilst in storage, general fatigue, hitting rocks or unseen objects… the list goes on and on. The chances are that a leak would be slow and you may not notice it for some time, perhaps you’d find yourself a mile or two offshore when the symptoms become all to apparent.

Ok, so I carry a manual bilge pump, most of the time. However, if you’re pumping you can’t paddle, or pedal for that matter. It’s certainly better than nothing, though I’d rather be underway whilst the kayak is pumping out water. I’ve seen videos where kayakers have just capsized, unaware that their kayak had flooded to a point of terminal instability!. I’ve wanted to fit an electric bilge pump for some time and as I’m currently finishing off the rigging on my Hobie Outback I decided now was as good a time as any.

What pump?. Rule pumps seem to be the most popular on the market for marine use and they have the advantage of being able to run dry (without water lubrication). After much research it became apparent that the 500gph (gallons per hour) was the model to go for. That narrowed it down to an automatic or manual version. I was originally going to go with a manual pump on cost grounds, though an Ebay bargain saw me go with an automatic version at the last minute!. 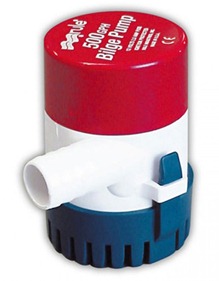 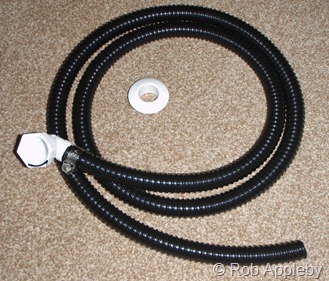 The next decision was where to fit the pump. Kayaks tend to sit down at the rear somewhat when loaded so it made sense to position it towards the rear of the kayak where any water would initially start to collect. I also wanted it situated where the hull was strongest so I chose a position in between the rear tank well scupper holes. The internal hull surface is smooth and requires ‘roughing up’ with some wet and dry paper, I used 300 grade. This enables the adhesive to bond more effectively to the hull. I’m a big fan of Marine Goop adhesive and have used it with excellent long term results on transducers. However, it tends to spread out quite rapidly so I first glued a circular ‘dam’ (neoprene ring) to the hull to hold the Marine Goop.  With about 3mm of Marine Goop retained within the foam ring the base of the bilge pump was firmly seated and allowed to dry for at least 24 hours. 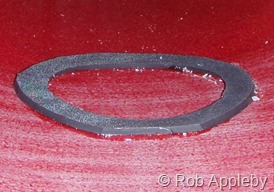 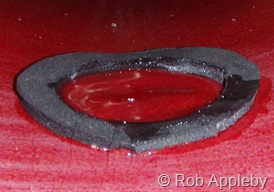 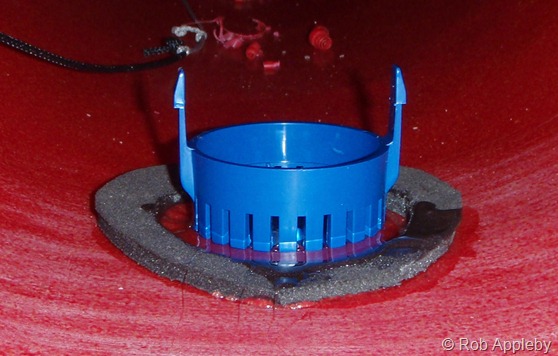 With the base of the bilge pumping drying into place I switched my attentions to placing the vent for ditching any pumped water overboard. For this I used a 90 degree skin fitting (19mm), the problem was where to position it. I finally decided on a flat area just behind the seat on the left hand size. The hole for the skin fitting is large so check you marking out twice before you drill the hole!. 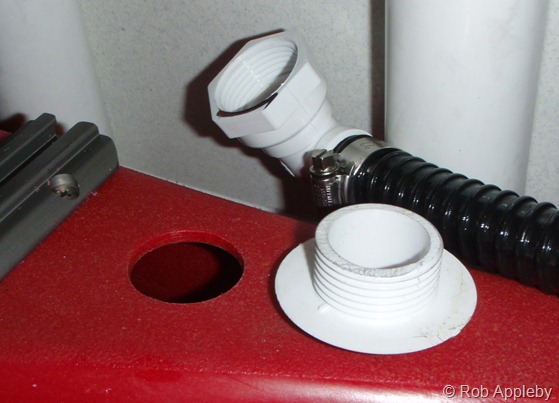 The skin fitting was supplied with a lock nut, though the use of that pushed the 90 degree fitting a little to close to the rudder lines for my liking. Again I roughened both the internal and external surface where the skin fitting would sit. Thought need to be given at this stage as to how you intend to route the pipework, as once the fitting is glued into place there’ll be little chance of moving it!. Marine Goop was again used to seal the fitting on both sides and it was left to dry thoroughly overnight. 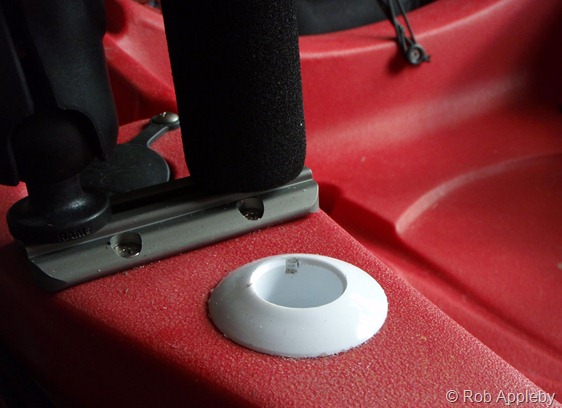 With various parts of the installation drying I switched my attention to the electrical side of things. I was making a completed wiring loom for the kayak at this stage so introducing the bilge pump into the design posed no problem. The main kayak battery is a 7ah SLA unit. This is used to power the LED navigation light, the fishfinder/GPS and the bilge pump. The Rule 500gph pump pulls 1.9A whilst running which means even with a partially discharged battery would give me plenty of time to return to shore should the pump activate.

The switch was mounted on the right hand side of the kayak just behind the RAM rod holder. A three position ON/OFF/ON switch was used. This enables the pump to either be in the automatic or manual mode of operation, the other position switches it off. 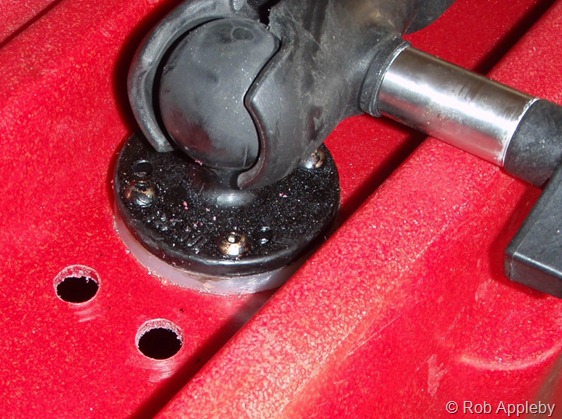 Saltwater will quickly destroy any exposed electrics so thorough sealing of the switch and associated loom is of paramount importance. 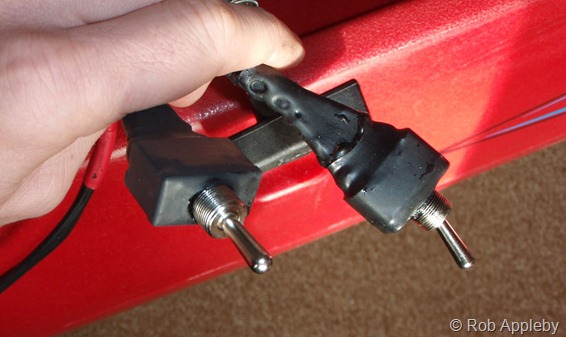 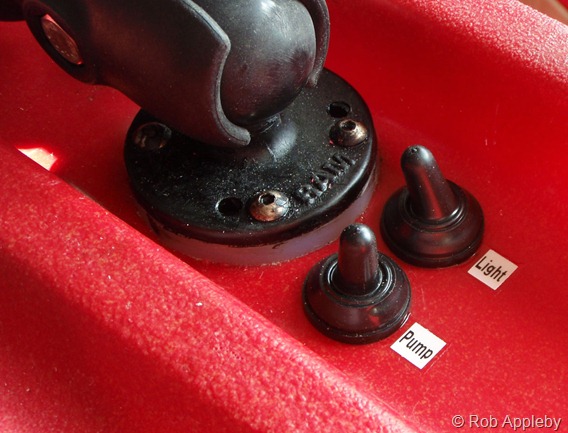 Full electrical installation for the kayak will be covered in more detail in a later article. With the electrics in place it was merely a case of routing the pipework and fitting the pump into position. It’s recommended that you place a loop in the pipe close to the skin fitting to prevent back flooding of water in rough weather. Routing the pipe in this way within the confines of the hull was one of the trickier aspects of the installation! 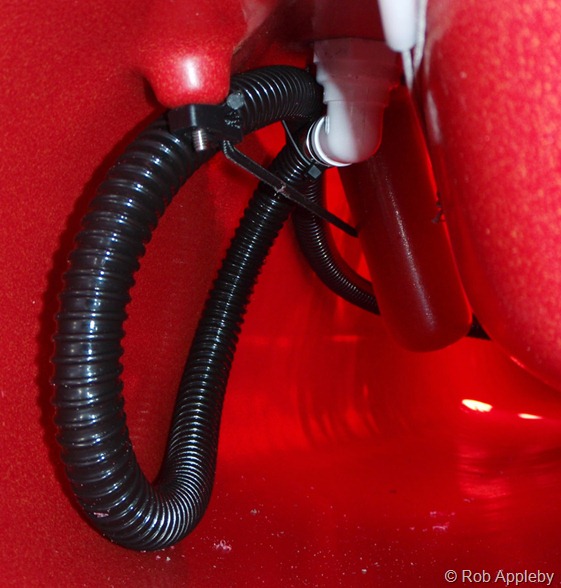 That concludes the electrical and mechanical installation of the pump. I’ll probably partially flood the hull at some point to give it a full functional test, however I’ve watched a few videos on YouTube and it will no doubt be very effective.

Another great idea from you Rob. Did you get all the bits from the same ebay seller? I can find the bilge pump on ebay and the 19mm piping and the other bits from other sources but well over the £50.

I got the pipe, clips and flush mount fitting off the same seller.

Would it be possible to give me the name of the ebay seller or the link?

Hi, the Ebay seller for the pipe, clips and skin mount is Selbyboatcentre.

Thanks Rob. I think it is a great safety idea to pass on and I will be fitting it on my kayak this year. I have a sloping section on my kayak to fit the skin fitting that would direct the pumped water away from the kayak. If the outlet is fitted on a level section of the kayak is it possible to fit a section of pipe into the skin fitting to direct the water away? I realise that the scupper holes would drain any water pumped back onto the kayak but it would be good to be able to direct the water away from the kayak.

Mine is also on a level surface next to the tankwell. I'll test the whole setup by partially flooding the kayak in a few days.

I envisage putting a semi-circular cover over the outlet as I'm hoping it'll have the same effect as putting your finger partially over the ned of a hosepipe, i'e the water will be directed to one side.

Did you ever test this works including the directing the water away from the kayak? Interested as if it works I would add it to my kayak as an extra safety measure.

I've not, though I've no doubt that it'll work as it was tested out of the kayak prior to installation. Though, now you've reminded me, I'll test it out tomorrow and try angling the water with a simple deflector.

Hi Rob
Fantastic blog! I'm currently planning my own bilge pump installation; may I ask how did you tackle waterproofing the switch? Is that heat shrink, self-amalgamating tape, or something else? I'm concerned that, of all the electrical connections, the switch is most vulnerable and likely to fail.
Cheers

Hi Chris,
The switch is sealed using heat shrink (various grades) as well as being waterproofed with a special adhesive (Raychem S1125). The adhesive is designed to work with heat so it flows when the heat shrink goes down and any excess can be wiped off. It cures into a flexible and fully watertight seal. If you don't use a suitable sealant, water will track up underneath the heat shrink quite quickly.. if it's saltwater it'll prove to be terminal pretty quickly!

No one mentioned anything about battery type for this bilge pump. I'm interested in adding one to my kayak but I would like to know what battery to use for power.

Hi, an SLA battery is fine. A 3ah would suffice if powering nothing else.