The plan was to hit the road at 6am, be on the water by 7:30am. We left a few minutes later as Daniel was requiring some extra beauty sleep, though we still managed to hit the water on time (I should state that no speed limits were exceeded in accomplishing that!). Breakfast was enjoyed on the water, my sugar levels most certainly enjoyed the boost! 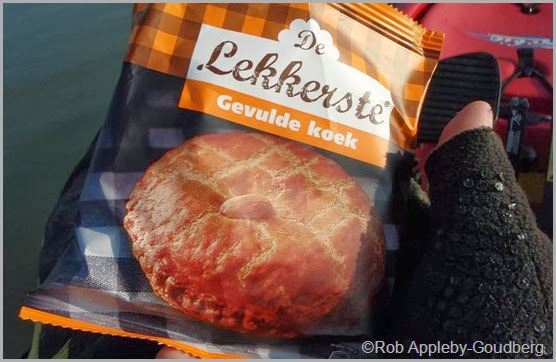 We were joined on the water by Leo again, with another Dutch chap, Ronald, joining us later as the day progressed. Techniques were the same as before and we worked our way along the waterways once more. Yesterday has been unseasonably warm with the temperature hitting a dizzy 22°C and it was looking like it was going to be another warm day afloat. I wear my dry suit all year round and it never proves to be a real issue. Should I warm up, I just pour some water over the suit and I rapidly cool down. However, at sea I’m far more exposed, there’s always a breeze to keep me cool. Not here, the trees and dykes provide a lot of shelter and I was warming up rather nicely! 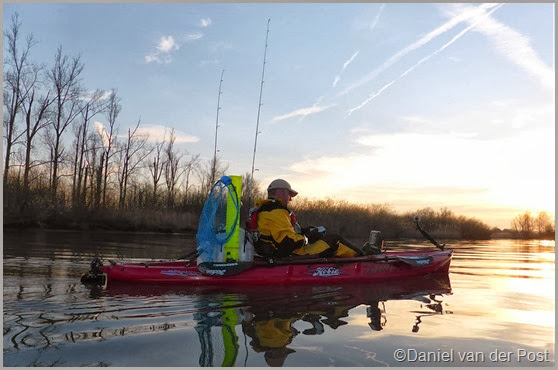 Not only was Sunday my second day chasing Piker and Zander, it was my last. The pressure was on and I really wanted to catch that elusive Zander. I’ve caught a Pike from the kayak before so the Zander was top of my wanted list.

As it happened I only had to wait a couple of hours to catch the first of my target species, not a Zander though. I trolled a small soft bait along a mooring wall for recreational boats and was rewarded  with a hard hit and a solid hook up. The result was a large Pike, though I nearly lost it next to the kayak. I was going to net it onto the kayak, though decided at the last moment to gill it on. I made the mistake of grabbing the trace as I often do when sea fishing, however the fine braid, thrashing fish and lighter terminal gear gave way. In the blink of an eye the lure flew onto the kayak, the trace was blowing in the breeze and I was holding the Pike by the gill… talk about lucky!. Lessons were learned and such things were not to be repeated. 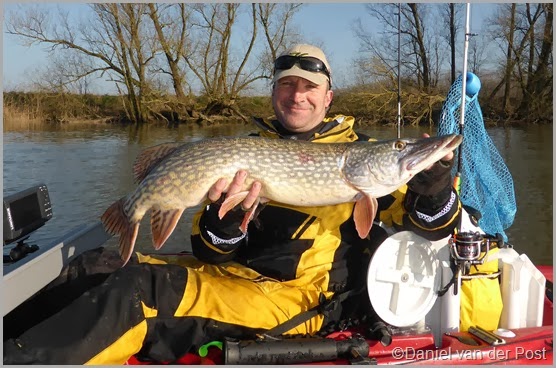 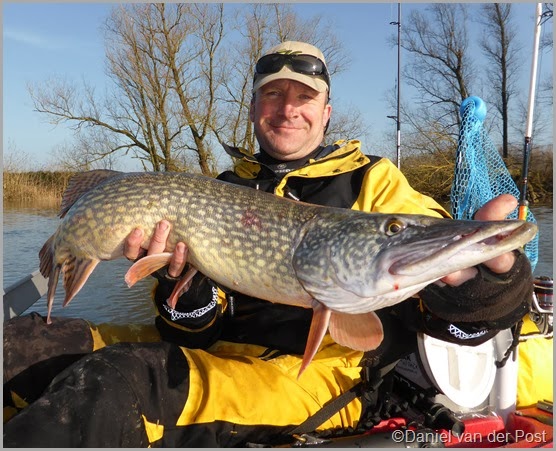 Despite a deep braid cut and a little ‘Pike rash’ moral soared once more and the hunt continued into the afternoon. I did drag myself out of the water at one stage and grabbed a little rest on the bankside. A young angler came and chatted to Leo and I enjoyed watching his enthusiasm, guess I was just like that once. As the day progressed people around me were catching Pike and Zander, though the action had dried up for me. Daniel landed another cracking Pike, you could easily grow to dislike this chap! 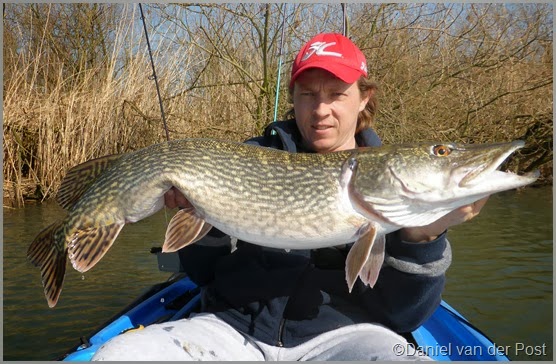 We fished the far end of the waterway for some time and despite it looking very fishy, it failed to produce anything for me. We moved into a sheltered lake that joined the main waterway and the guys took the opportunity to grab some trophy photos. Not of trophy sized fish, but of them holding the winners trophies for the European part of the Kayak Wars 2013 competition. All three of them regularly fish and catch one big fish after another, they most certainly deserved to be the winning team. They’ve also made a great start to the 2014 competition, watch this space. 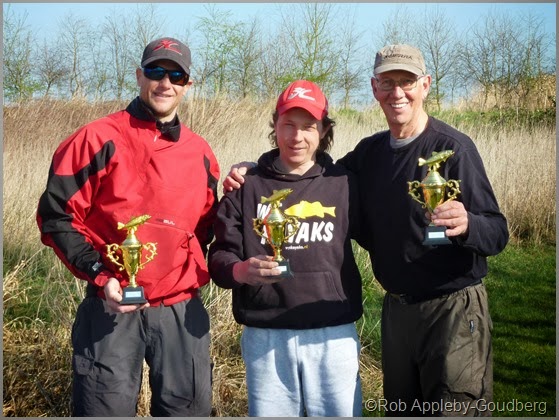 The sun was quite high by midday and the Zander, being somewhat shy of the sun, were proving to be rather elusive. I felt that my chances of catching a Zander were fading rapidly so I started fishing the few areas of shadow offered by the trees. I trolled one likely looking area once without success, so I passed through it one again and found myself hooked up!. As the fish neared the surface I quickly made out the shape of a Zander and it was netted aboard in record time!. It was no monster, though at 61cm it was respectable, though most importantly it was a Zander!. Typically there was no one around to take a photo, so i kept the fish in the net alongside the kayak and pedalled downstream until I found one of the guys. 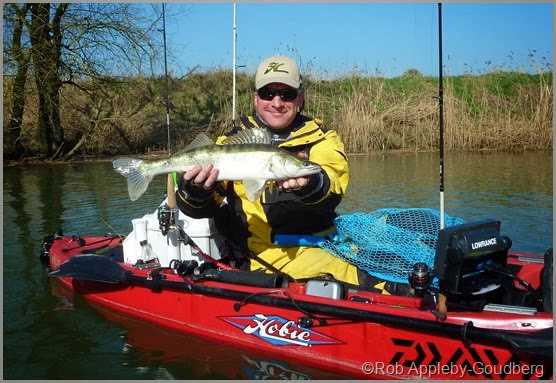 So I’d caught a Perch, a Pike and finally the elusive Zander, all boxes had been ticked. We tried a few more areas and apart from missing one hit I had no success. Tiredness was catching up once more, things weren’t helped by my increasing temperature due to wearing a dry suit. I wasn’t HOT, but warm and tired. There was clearly only one sensible solution, pull over and sleep. (thank you Leo for catching me in a deep sleep!). 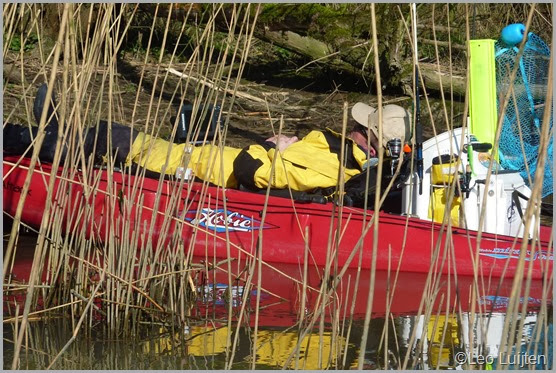 We travelled along some narrower waterways, very scenic, though the fish weren’t entertaining my efforts. I managed to snag the bottom, snag a tree, get stuck in a tree… interesting moments. I decided it was better to admit defeat and retire back to the wider main waterway. 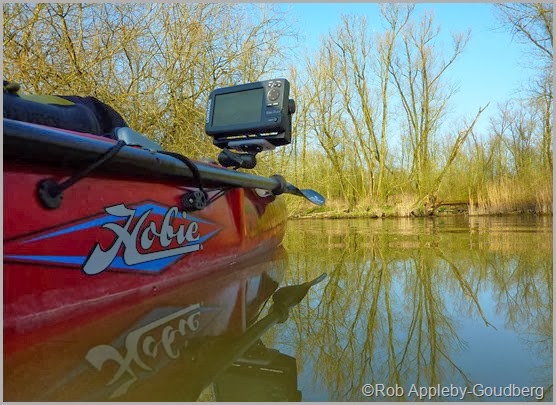 I trolled a lure on the way along an extensive drop off and experienced a hard hit and a brief hook-up to what felt like a nice sized fish… a monster Zander perhaps?!!. That basically marked the end of that trip and we came off the water at around 5pm, yet another long day afloat. Sunday evening saw myself and Daniel enjoy some very tasty takeout, a few drinks and plenty of fishing chatter, these really are great days afloat, days to remember. 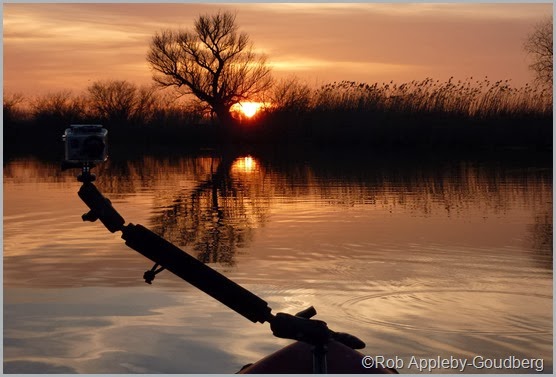 I packed my gear and headed back to Eindhoven on the Monday, and with the family safely aboard we headed back home. That concluded another very good and successful road trip, where will the next one take me?

Really beautiful pikes, I can only imagine how much fun it must have been to catch them.