First competition of the year!

I keep rambling on about how I'm getting back to my saltwater roots this year, only to find myself floating around in the fresh stuff. Trust me, it will happen!. However, last weekend saw me back on.... ummmmmm, freshwater, hey ho.

The competition had been organised by my good friend Ian Harris in a location that must remain secret I'm afraid. I was told that it held predators in the shape of Pike and Perch, with the water holding some very large Perch, potential record size. Ok, I was hooked. It was also to be an invite only competition with many notable names appearing on the list. I'm still very much a learner with regards to freshwater angling, but I persevere.

I was out of bed by 0330 on the morning of the competition and parked outside the house of another good friend, David Morris, by 0500. Two hours later we'd arrived at the secret location!. The competition wasn't due to kick off until 0900 (earlier would have been nicer), though it provided a luxurious amount of time to rig the kayaks and to catch up with the multitude of kayak anglers that were milling about. Faces both old and new.

The launch was quick and uneventful with all anglers keen to get fishing. 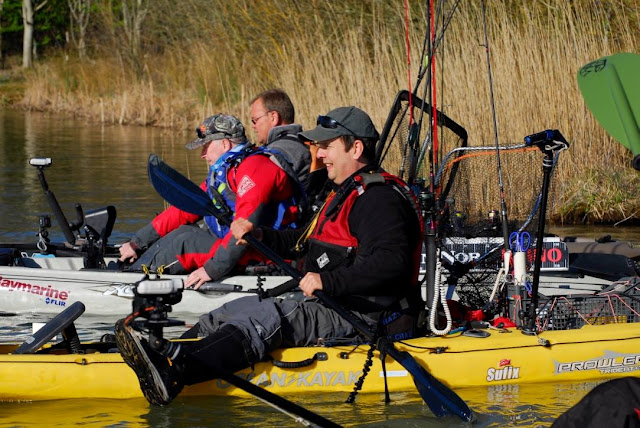 I think that there was 29 kayaks afloat with almost half of those being Hobies. It's interesting to watch the Hobie brand grow here in the UK. It's been well established overseas for a long time. Though if I look back three years or so, there were only a handful of anglers fishing from Hobie kayaks here in the UK, that is changing very quickly now.

I'd decided to take three rigged rods to fish, trolling, spinning and dropshot. I'm still not a big fan of the latter method, though it's caught me fish in the past when all else has failed.

I have a couple of fish measures that I use, my favourite being the Hawk Trough as it's lightweight and easily stored. Though it's limited to fish of 75cm which is far from ideal when there's the chance of catching larger fish!. I decided to do a 'hack job' and extended the Hawg Trough by cutting a length of another I had spare. Drastic perhaps?, but it worked. I used some mitre glue for the join, with some re-enforcing plastic added to the rear for additional strength. Here's the result...

The centimetre and inch scales obviously don't align along a measure so I had to choose one or the other to use when extending the measure. I went with centimetres. I used a 'Dremel' tool to modify the numbering on the extended portion. It's not perfect, but it's very useable. It now measures up to 125cm accurately, though I've lost 1/2" (see the 29/30" mark), so the inches scale won't be used after 29", if at all.

Anyway, back to the fishing. The competition started promptly at 0900 and I went directly to a small feature along one bank to cast a few lures. Now I'd been using 30lb on that particular reel the previous week, though I'd re-spooled with 20lb the night before. Not really thinking I cast out and looked in amazement as my lure flew effortlessly into the distance. By the time I 'hit the brakes' my lure was parked in a tree!. A superb start to the session. I actually had to exit the kayak to untangle the mess, say no more.

Despite the number of anglers on a small water, I was still able to troll in several areas. Within 45 minutes I'd landed my first fish, trolling a small Rapala diving lure running at around three metres. At just over 56cm I think it's the smallest Pike that I've ever caught!!, though as the competition was for overall length (max 3 Perch and 1 Pike) they all counted.

It's always good to catch quite early on, or to even just get a bite or two, as it boosts one's confidence no end. With no more fish coming to trolling over the next 30 minutes or so I decided to swap over to the dropshot.

I rigged up with a small reflective needle tail lure running about 12" above the weight. Due to the breeze I was using a weight of around 18g whilst drifting in 4-5m of water. Frustratingly, the bed of the lake was clearly soft mud, with the weight sinking into the mud almost immediately. A lighter weight was marginally better, though caused the line to lift far to much for my liking whilst drifting. I put up with the heavier weight, lifting it out of the mud ever few seconds. Far from ideal, but I persevered.

I actually didn't have to wait too long for a solid hit and hook up. It was clearly a Perch and it was soon visible a couple of metres beneath the water. As ever with Perch, I only risk a smile once it's slipped safely into the landing net. With the fish safely aboard it was simply a case of measuring and returning it. At just over 42cm it was a very respectable fish and from what I'd seen and heard around the lake I was fairly well placed at that time, though there were still several hours of the competition remaining. 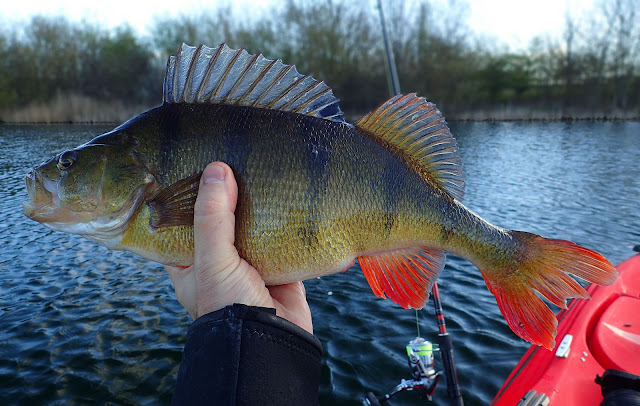 Despite there being 7 hours of the competition remaining, that turned out to be my last fish of the day. Despite trying several different lures, trolling, spinning and dropshot, I didn't get some much as another bite!

There was the odd fish being caught around the lake, though it was slow. That said, the quality of some of the Perch that were being caught was simply outstanding!. Here's a couple of the larger specimens that were caught during the day.

This is Charles Halliday with a fish that was 49cm and weighed in at over 5lb! 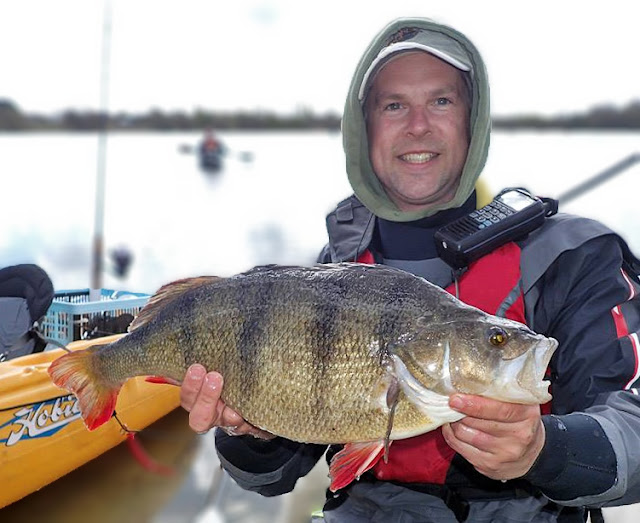 Here's Dane Wood with another Perch of 5lb, these are really cracking fish! 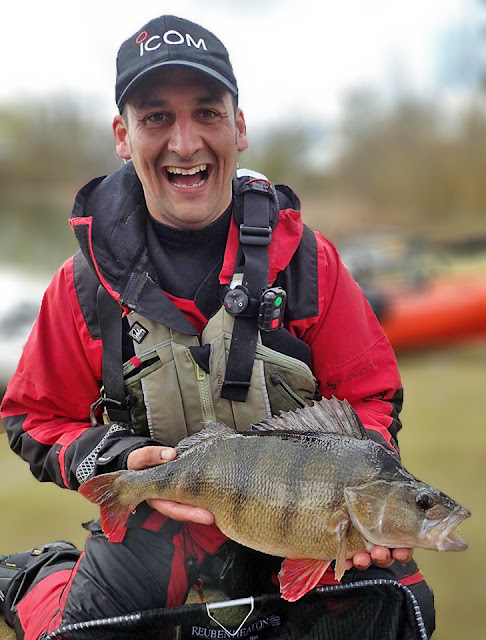 I persevered at the fishing as I was aware that no one had more that two fish to submit by mid-afternoon. Though it was utterly dead and I was struggling to remain motivated. I did in fact doze off for 30 minutes when the sun came out and warmed my dry suit up a treat. I was still holding my drop shot rod just in case!

Despite the quality of some of the fish that were caught that day, I somehow managed to secure myself 5th place and walked away with a Hobie H-Crate. Bizarrely, if I could have picked a prize from the lineup, that's the one I'd have picked!, lucky me. 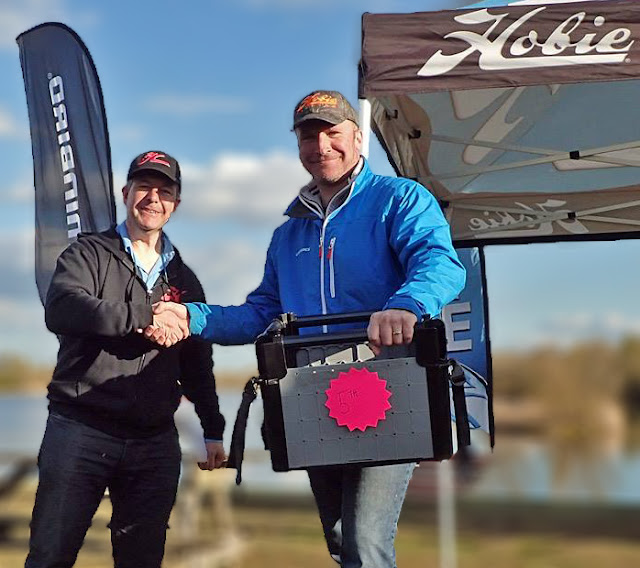 Of course it always nice to win a prize, though the main enjoyment has to go to the social side, meeting faces both old and new. Plus it was a new venue, that's something that I always find exciting. It's not all about the fishing, far from it.

Many thanks to Ian Harris for organising the day, it ran smoothly and it was certainly on par with some of the better competitions I've fished over the years.
Email ThisBlogThis!Share to TwitterShare to FacebookShare to Pinterest