I'd been looking forward to this fishing trip to the Netherlands for some time. Though like any trip booked in advance you're always at the mercy of the weather. I've been bitten once or twice before and poor weather unfortunately featured rather heavily during the few days I was abroad. When a kayak fisherman talks about poor weather, it's almost guaranteed that they're referring to excessive wind. Cold, rain, snow and heat doesn't bother me at all, but fishing in strong winds removes the enjoyment factor for me. After all, we fish for the enjoyment right?

The target species for the week were the usual predators, Pike, Zander and Perch with a potential later in the week for some Trout fishing.

The first day was reasonable weather wise and I covered a large area on the drift, spinning as I went. Casting from deeper to shallow water, covering as much ground as possible before repositioning and repeating the action. It felt as though it was going to be a slow day, though I hooked into a fish quite early on which is always provides a good boost to morale. It was an exceptionally light bite that resulted into me hooking into a Zander. It was an average size, though it provided a very pleasing start to the day. 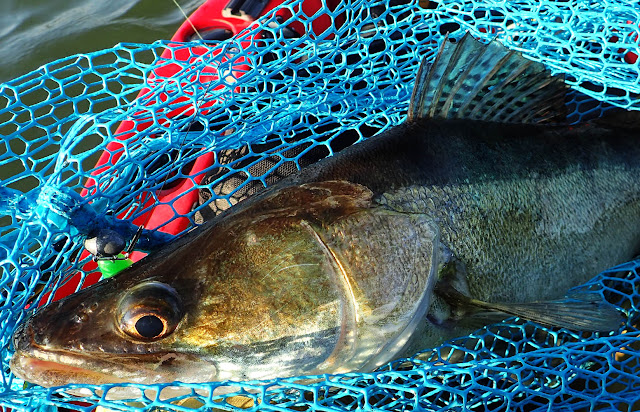 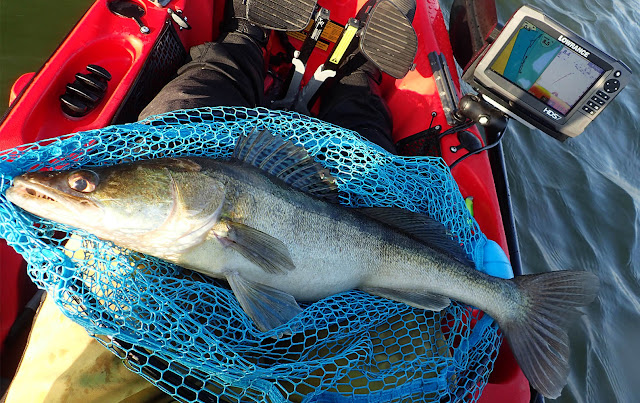 Was did prove most frustrating early on was finding that the internal battery on my HDS7 had discharged causing all my custom settings to be lost. I only had myself to blame, I'd not fished for way too long. That said, it's highlighted a good point that these modern units that permit such huge customisation do require operating ever month or two to ensure that the internal battery remains charged. Failing to do so will require the user to spend quite some time getting their unit back to their preferred settings, lesson learned!

Despite the promising start, that turned out to be my only confirmed hookup for the day, though I missed a couple of hits during the session.

That evening saw the weather deteriorate considerably to a point that I didn't really fancy fishing. To fish in highly exposed waters in a steady 20mph+ wind, gusting to 35mph really doesn't excite me. Regardless of the fact that I'd driven several hours to fish this area in the Netherlands, there are days that are best spent relaxing, enjoying a beer and watching the world go by. The next couple of days were in my mind 'pub days'. Fortunately the family were only an hour away so I enjoyed some quality time with them whilst awaiting the bad weather to blow over.

The next trip was to fish a Perch venue, an early start saw me fishing before 0630. The water clarity was very good, with the bottom being easily visible over two metres. Though that does perhaps make fishing rather more difficult. The beauty of these trips is that many of these venues are new to me. I get as much pleasure out of enjoying the surroundings and wildlife as I do fishing. It's just a very pleasant experience.

I didn't have to wait long before my lure was hit hard in shallow water by an angry Perch. They're fun on light gear and I tend to lose more Perch than any other species, so it's always pleasing to watch them slip into the net!. 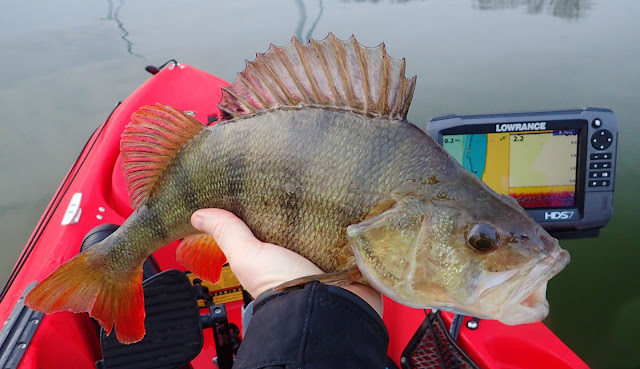 It was a nice sized fish, somewhere in the mid-40 centimetre range. It had engulfed the lure!. It was quickly unhooked and photographed before swimming away strongly. There's something about these striped fish that always makes me smile.

Despite a few rattles, the remainder of the morning was quite quiet. I lost what I guess was a nice sized Pike whilst trolling, losing it just a few seconds after hooking up. Such is fishing.

At times I just like to place the rods to one side and just drift, taking in my surroundings. There were many species of geese migrating, divers working the water with many noisy Coots scooting around in the margins. I occasionally see a flock of geese passing overhead in the UK in their classic 'V' formation, though at times you can witness a couple of dozen of these formations flying back to back and side to side, passing over these extensive areas of wetland. That's one beauty of the kayak, taking you to these place and permitting you views that most people will never get to witness. 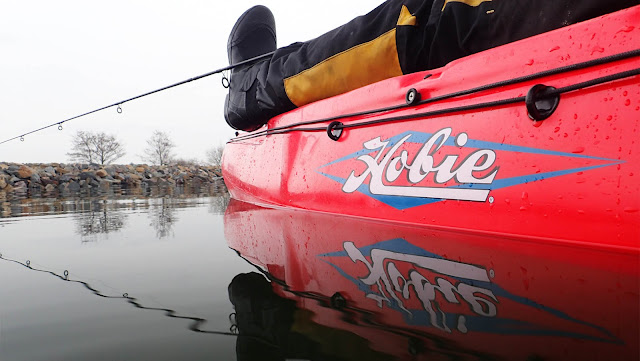 I'm slowly upgrading my tackle this year and it began with the purchase of a pair of Shimano Symetre 2500 fixed spool reels. They're a mid-range reel and I secured a decent price by purchasing from France (http://www.pecheur.com). I cant justify spending crazy money on tackle, especially when freshwater isn't really my forte and I only freshwater fish a few times a year. That said it's a very well made reel, extremely smooth with superb line lay. I've currently go both loaded with 30lb Whiplash braid, though I'll going to re-spool one with 20lb as it'll be better suited for casting lighter lures. 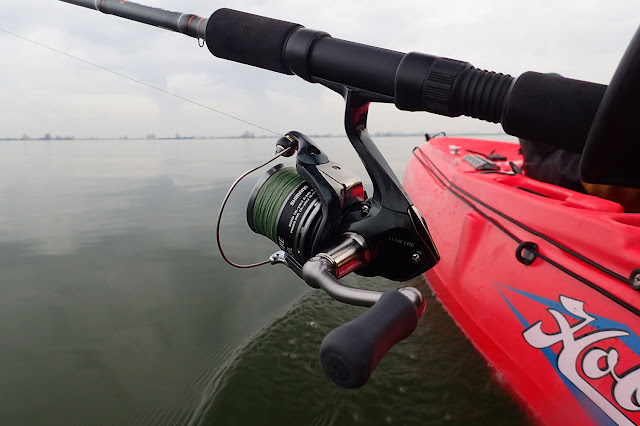 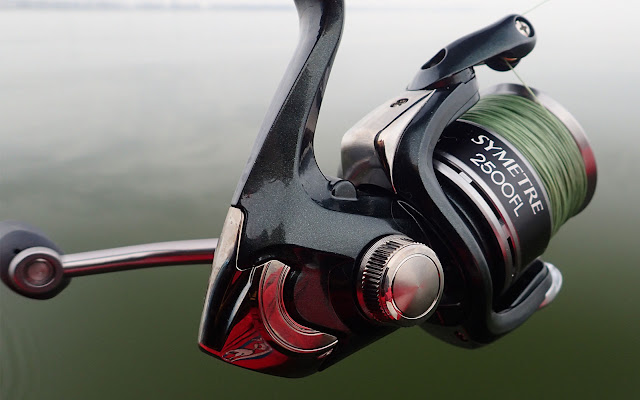 I managed to hook into a small pike towards the end of the session. He may have been small, though he had no problem whatsover in taking the Rapala Deeptail Dancer lure that was running in about 4m of water. I didn't manage to hook into any of the larger Pike that the Netherlands is well known for, but still, it was another fish and that's never a bad thing.

The last day of fishing proved to be the best day. The venue was a small lake stocked with both Rainbow and Brown trout. It had apparently previously been saltwater, though had long ago been closed off, with the water was somewhat brackish. This threw up a surprise as the day progressed.

I trolled my way around this lake, roughly following the drop offs that were somewhat wild and erratic in their pattern. I don't mind trolling for an hour or so, though it can get rather boring rather quickly for me. Despite that, it did produce several fish for me, the first being a nice Brown trout taken on a crankbait running at around four feet.

One thing I do enjoy about trout is that they can get rather lively and provide some great sport. Half an hour later I found myself hooked up once again. Well at first I thought that I was perhaps catching the bottom, though a quick glance at the HDS7 showed that I was well clear with no weed in the water. But no, it was definitely a fish, though it appeared to be swimming along with the kayak?. The biggest surprise was when it came to the surface... a Flounder!. During it's saltwater days, this water held Flounder and some Herring and the Flounder had adapted easily to the change in salinity when the water was closed off to the sea. Apparently there are also still some Herring in the lake. 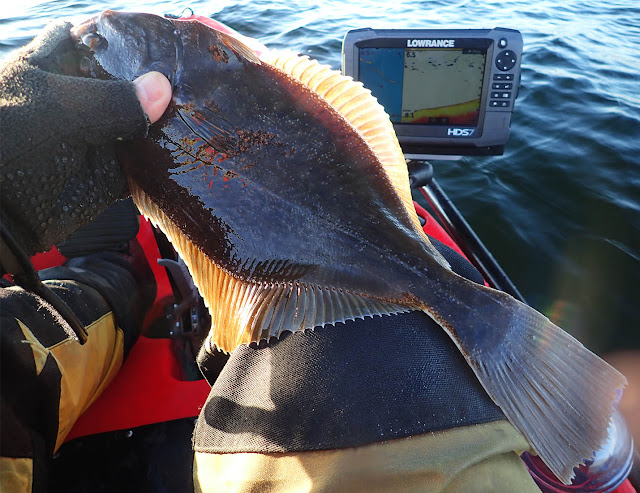 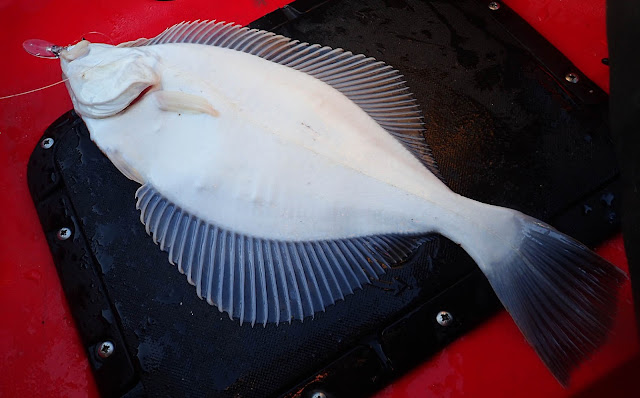 I took three Flounder in very quick succession, two being to a double hookup!. If I passed over the correct ground, shallow, flat, patchy weed, it was almost guaranteed that the Flounder would have a go at the lure. They were all caught on the same small crankbait lure as the Trout. 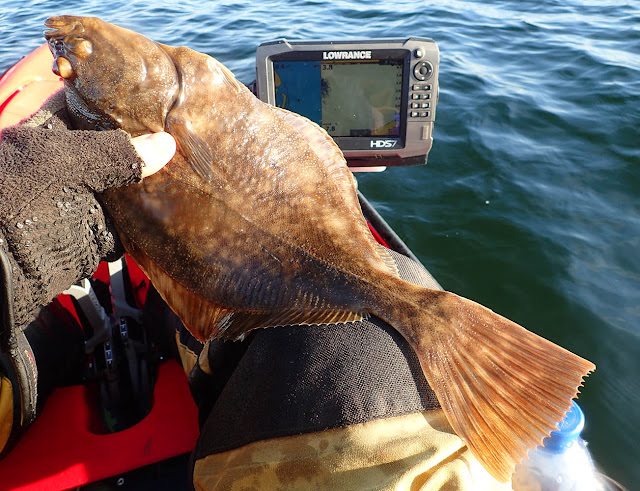 Despite the good fishing there's always the opportunity to enjoy the surroundings. The sun was up, the wind was light, it was warm!. I also found a shallow sheltered area where I tied off to a small buoy and just snoozed for 30 minutes, perfect!. Hey, I'm on holiday! 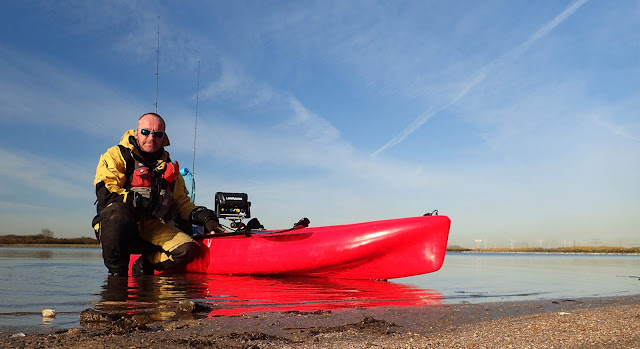 The Trout continued to come, and despite a couple of misses I caught another two Browns. I also caught a beautifully coloured Rainbow Trout that gave a great account of itself, getting airborne at times. I missed the opportunity to photograph it on my lap as it decided to depart the kayak a few seconds earlier than planned! 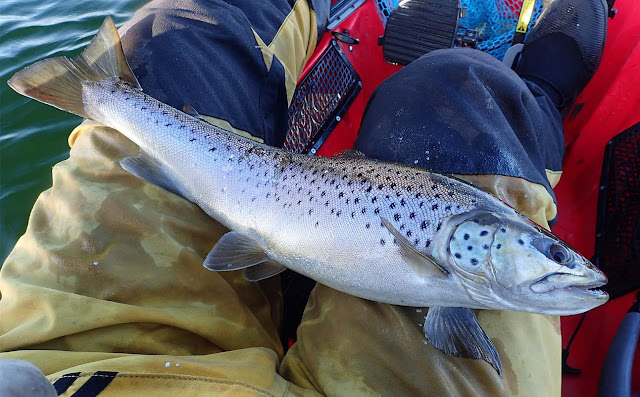 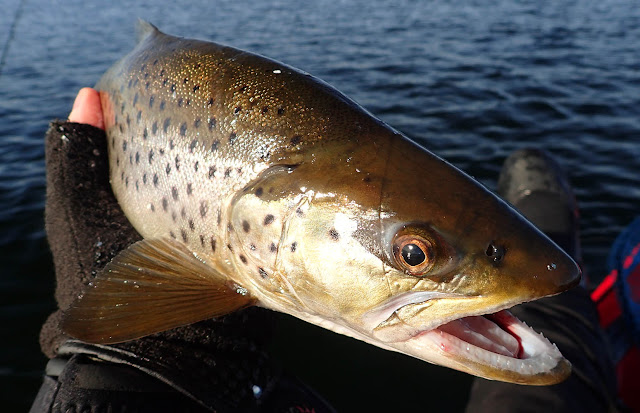 I managed one last Flounder before I'd decided to call it a day. 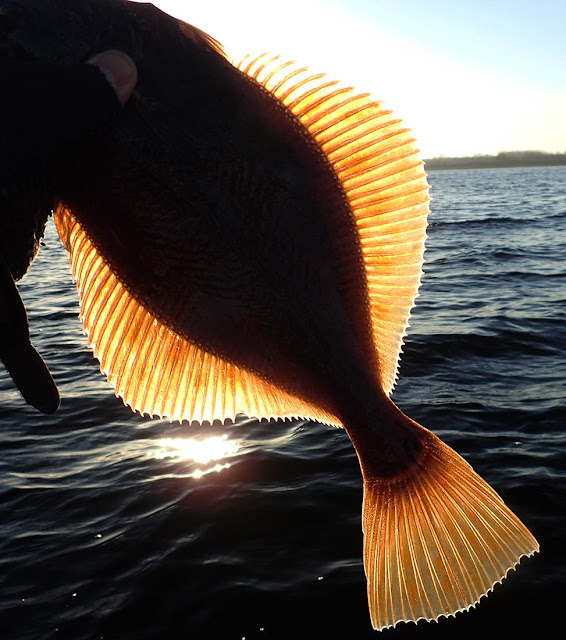 After about 7 hours I'd had enough for the day, I'd managed to catch eight fish in total. None were monsters, but it was a really enjoyable session. It was my last fishing day of the trip and it was a good note to finish on. 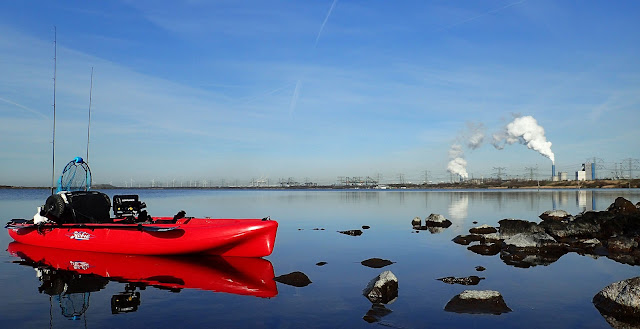 This weekend sees me travel to a small lake at the Cotswold Water Park. This will probably be my last freshwater trip for 2-3 months as I really must concentrate of clocking up some serious hours on the salty stuff. My boy is really keen to fish with me this year so I expect that the Adventure Island will see a lot of use. I'm going to have to make a pair (or at least one) Haka. These are a wooden bench type of seat that permits a person to sit outboard of the main kayak hull on the AI. I'll post some pictures on here once I've knocked them together.
Email ThisBlogThis!Share to TwitterShare to FacebookShare to Pinterest