An evening in the Solent

The forecast for the weekend had been looking favourable since midweek. My daughter was keen to go fishing again so I organised our gear on Friday and she even went and purchased her own bait on Saturday morning. A couple of hours before we were due to depart it transpired that she was having a friend stopover that night. The tide was an evening tide and once it became clear that we wouldn’t be back until at least 8pm she had a decision to make!. It was clearly a tough one, though fishing lost… perhaps that’s the real difference between boys and girls?

The original plan had been to fish at Eastney in the hope of some late Plaice, though an opportunity to fish the evening at Hillhead also made itself available,… decisions, decisions. The wind had picked up to 15mph, not the 4-6mph as forecast so I decided to fish a little later in the hope that the wind would have eased off, so Hillhead it was to be.

It was surprisingly warm so I decided that a layer of thermals, thin under suit and dry suit would be fine. I was rigged up and ready to launch before 1730, though there was no sign of my fishing partner. A quick phone call showed him to be running late, needless to say I decided to launch and get fishing!.

So much for the wind easing, it was blowing a steady 15mph, white horses right across the Solent, conditions weren’t exactly ideal. Once I was a couple of hundred metres offshore it became particularly choppy with every wave breaking over the hatch, giving me a face full of salt spray all too often. I was still hopeful that conditions would ease so I headed out just under half a mile and dropped anchor. Once anchored and lying with the tide there were a lot of waves coming over the back of the kayak, a little concerning as they were also going over the 8” hatch that’s located at the rear. If nothing else it was going to be a good test of the watertight integrity of the hull!. If the hatch seal wasn’t up to the job I always had my bilge pump!

I fished one rod with a running ledger, baited up with a strip of mackerel, the other rod with a Plaice rig and ragworm. This is basically a two hook wishbone with lots of beads as shown below (this is an old photo from 4 years ago) 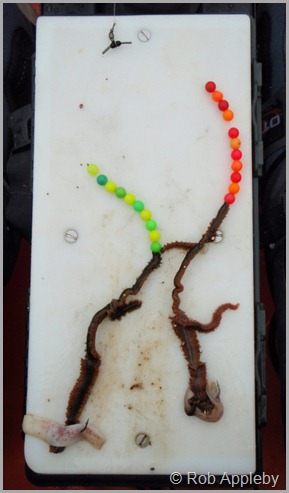 I didn’t have to wait too long before the mackerel bait attracted some interest. Despite the lumpy sea, a couple of hard nods on the rod tip showed an unmistakeable bite. I tightened up into what felt like a decent fish. I was surprised when a Thornback Ray of 5-6lb came alongside, it felt somewhat larger than that. It was then I remembered that I was fishing with a 6-8lb rod as opposed to my usual 10-15lb outfit that’s required for fishing the strong tidal waters of the Bristol Channel. 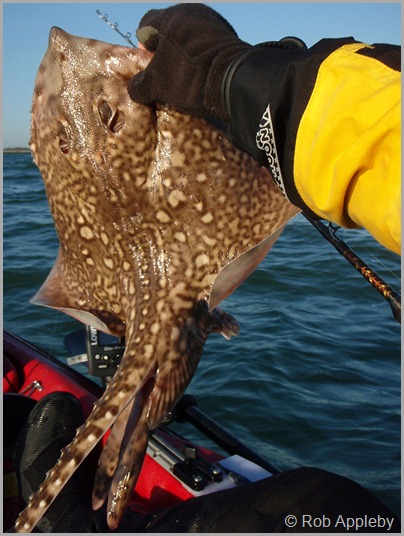 All was quiet for about thirty minutes until the mackerel bait proved just too tempting. After a spirited tussle another Thornback of a similar size came to the kayak. 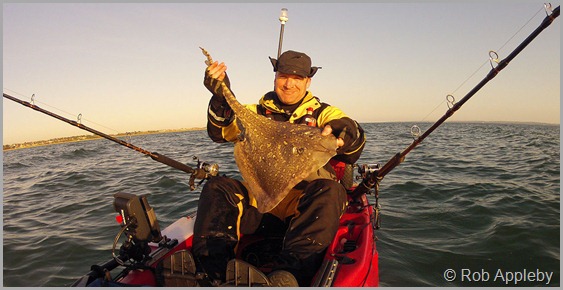 As I released the fish my fishing buddy appeared and anchored up close by. The weather conditions had improved quite dramatically by this time, the wind having eased off considerably whilst the white horses had disappeared making fishing rather more comfortable.

After another half hour or so the mackerel bait claimed another fish, no real surprise when another Thornback came onto the kayak to be unhooked, photographed and returned. The fish was a similar size to the first two, though still good fun on the lighter tackle. 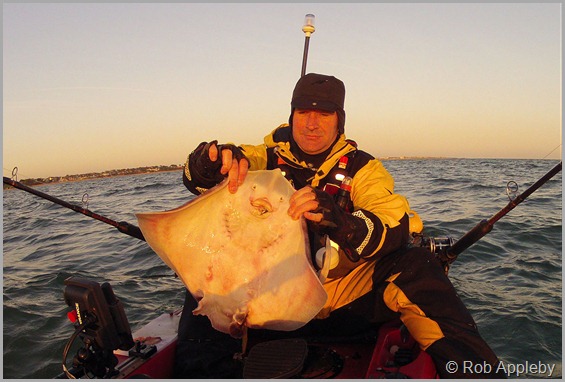 With the sun below the horizon and the wind beginning to freshen once more, the temperatures began to plummet. I’d dressed quite lightly, a decision that I was definitely beginning to regret. I was warm below the waist, though my upper body and hands were cooling rather rapidly and the enjoyment of being out there fishing was starting to evaporate.

The ragworm finally tempted some interest and after a few aggressive bites a very small bass landed on my lap. Small it was, but it was also perfectly formed.. always nice to look at. 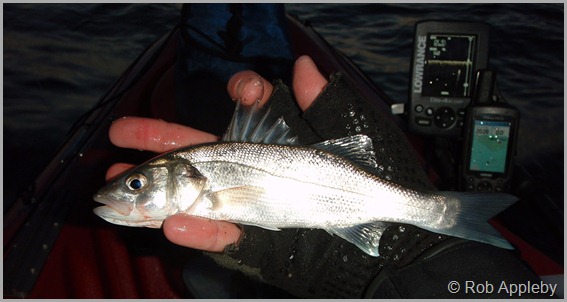 I lasted another twenty minutes after this last fish before hauling anchor and heading back in. I cant really complain, the water is cold and the fishing is particularly slow for this time of year. I’d only been fishing for just over three hours, so catching four fish wasn’t too bad a result. Once back in the car the temperature was registering six degrees Celsius, it certainly explained why I’d been feeling the cold out there.

Below is my favourite photo from the day, another great sunset afloat. 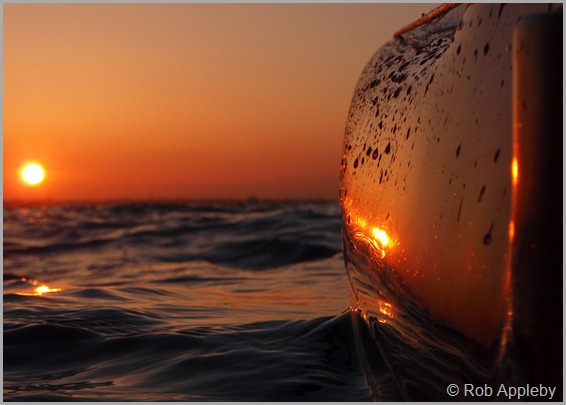 Here’s a video clip from the evening. I only took the one video camera so there’s only a front angle. I also forgot to swap it to a wider angle so it’s a bit close, top of my head missing, etc!.. some would say that’s a good thing!. Anyway, it’s all fishing so it can only be good.

Catching a few Thornback Rays in the Solent

I really enjoy to read all the content is posted on your blog. It's easy to read, the content is great, and you’re an educated writer unlike most of the blogs.thanks for the post.

That sunset shot would work in lots of publications - you ought to see if Hoby want to buy it!!! Good fishing too!

You did get some great pics on this adventure. I have never caught a thornback before but they look like they would be fun to catch.