Rigging the Hobie Outback for photography

If you’ve followed my blog entries over the past few months or years, you’ll have noticed that I enjoy taking photographs and making movies. I enjoy populating my fishing reports with images and to ensure that any reviews or DIY guides are suitably illustrated. I’m not a fan of reading reports or articles with no images to back them up, each to their own I guess, just my personal preference.

I have anything up to three GoPro cameras mounted to my Big Game kayak, so when it came to rigging the Hobie Outback I also need to take the photography aspect into consideration. It does take me quite some time to plan and rig my kayaks, however, I sit back and take everything into consideration and try to produce the cleanest setup possible that caters for all rigging possibilities.

Some time ago I upgraded my cameras to GoPro Hero 2 items, I also took the opportunity to fit wireless backpacs which permitted all cameras to be operated remotely. This had the advantage of being able to mount a camera where access afloat may prove an issue. Once I’d pondered the various possibilities I tried to tie them in with the other rigging aspects that I needed to accomplish. This is where the GearTrac from YakAttack really started to come into its own. If you’ve read Part 1 and Part 2 of ‘Rigging my Hobie Outback for fishing’ you’ll be all to aware that I’ve already heavily utilised GearTrac on the Outback.

I have three main camera mounts that can be fitted to my kayak, there’s the Panfish Portrait, the DogBone mount and my extendable camera mount. 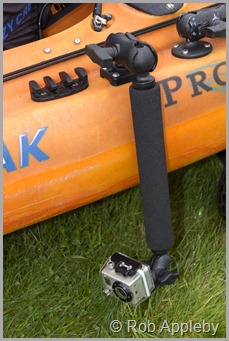 The PanFish Portrait can be ordered with several mounting options, though mine is designed to fit to either GearTrac or a MighyMount, both manufactured by YakAttack. The DogBone fits to a 1.5” RAM ball, though the use of a ScrewBall from YakAttack permits the DogBone to again be fitted to either GearTrac or a MightyMount… clever stuff!. My own DIY extendable camera mount (monopod) was designed with a T-bolt in the base. Oddly enough with is a YakAttack T-bolt!, yup, it also fits the same mounts as the above items, though it also slides into most rods holders. As you can see all my mounts are exceptionally versatile and with a few lengths of strategically placed GearTrac, they can be mounted in multiple positions around the kayak.

The PanFish Portrait, as the name portrays, was designed to capture portrait photos, those big fish moments that we want to capture on camera. I chose to have it mounted as far up front as reasonably practical. As mentioned earlier, the cameras are controlled by remote so reaching the camera whilst afloat is not normally a requirement.

I mounted a length of GT90 GearTrac ahead of the front hatch, this is an ideal location for the PanFish Portrait. The angle of view on the GoPro Hero 2 can be varied from 90,120 and 170 degrees, allowing the camera to be set to suit its location and intended use. 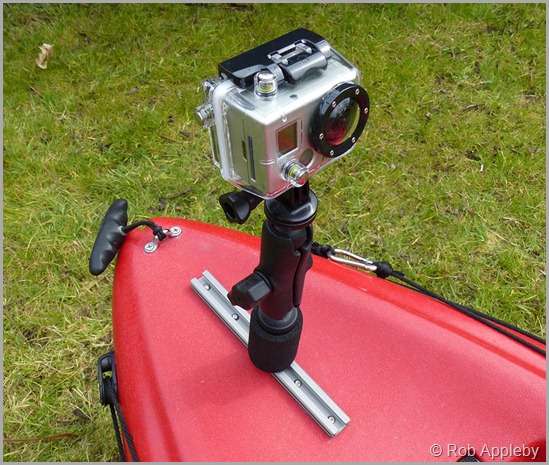 Any of my mounts can be placed in this position, though the monopod is a little wasted in this location, however, the DogBone has potential to capture a slightly different angle and height. 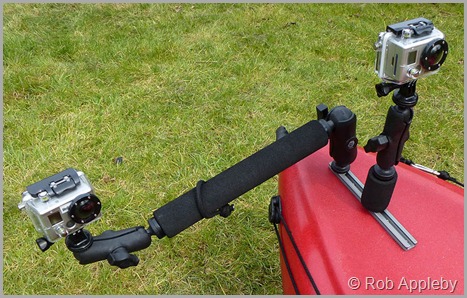 There is of course the risk of getting water splash of the lens of the GoPro when mounted forward and low to the water. I’ve not tried the DogBone is the low position shown above, though the PanFish Portrait has not suffered despite nosing into several smaller waves. There again, what if it rains?!. It is actually possible to slide forward and reach the bow of the kayak. It’s not something I’d have attempted on my Big Game, though it’s a straightforward manoeuvre on the Outback.

I’ve previously used the DogBone is several ways, though I find it best suited to being mounted outboard of the seat, or deployed for underwater footage. I’d positioned some GearTrac behind the seat on either side, this proved to be perfect for mounting the DogBone, allowing it to fulfil both of these duties as required. 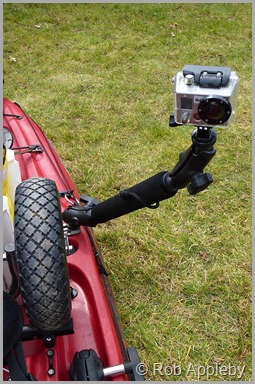 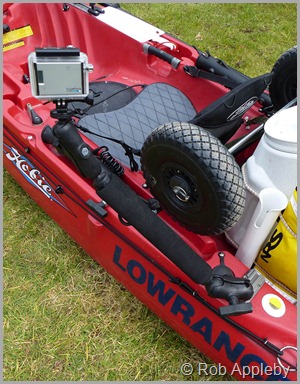 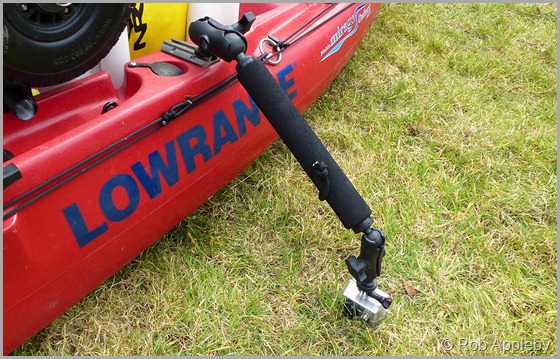 The photos below show other mounting combinations. I can mount the extendable camera mount onto the dry box as there’s a section of GT90 GearTrac fitted to it. I fitted a 1.5” ScrewBall to the GearTrac behind the seat and fitted a RAM Tube rod holder to it for illustration purposes. 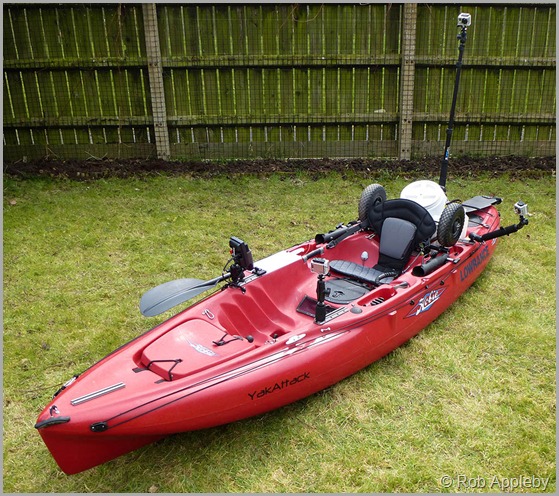 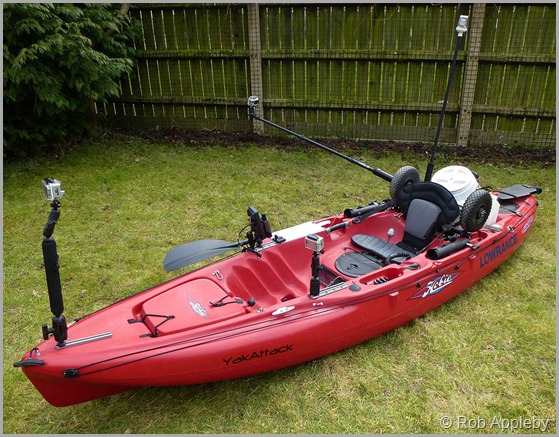 I do this a lot and it permits me to position the camera well away from the kayak resulting in some interesting photographs and video footage. 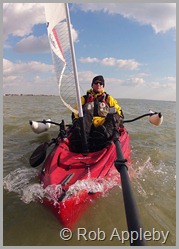 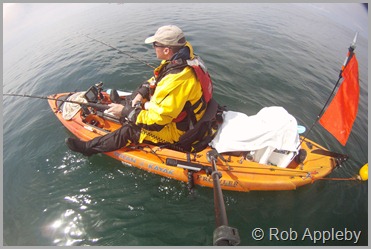 People have often asked me how I achieve so many different angles when taking photos or shooting film from the kayak. It’s purely down to having 2-3 cameras operating at once from different positions around the kayak.