I’ve already looked as the basic fishing setup in Part 1, there I covered permanent fit items as well as basic items that I’d fit to the kayak to cover general fishing duties. I’ve also covered rigging the Outback for sailing in a separate article.

I’ve tried live baiting from a kayak in the past with some exciting moments a few good fish to show for it. I did make a DIY livewell, though I have never used it in anger, the opportunities just never presented themselves. What live baiting I did accomplish was a result of catching a suitable bait and dropping it straight back down on a hook. I recently acquired a Hobie Livewell which after some minor modifications (click on the link for the full article) is ready for use. Fitting the livewell is straight forward enough, it’s a case of attaching the uptake pipe, lowering the overflow pipe to the desired level and clipping it to the kayak.

The livewell comes with two straps as standard which I personally didn’t feel was enough. There’s also the issue that with the livewell fitted of where to store the kayak trolley. I added a removable bungee cord to two existing fitting behind the livewell and I use it as shown below. 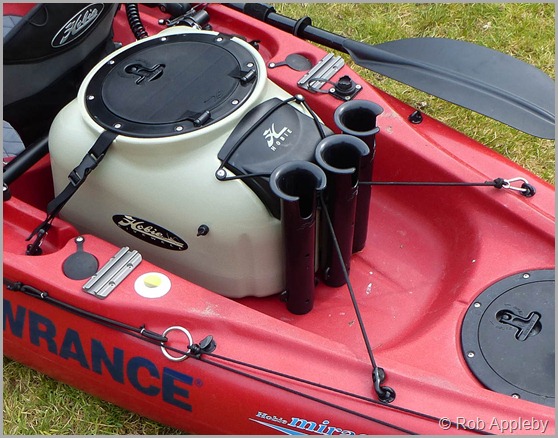 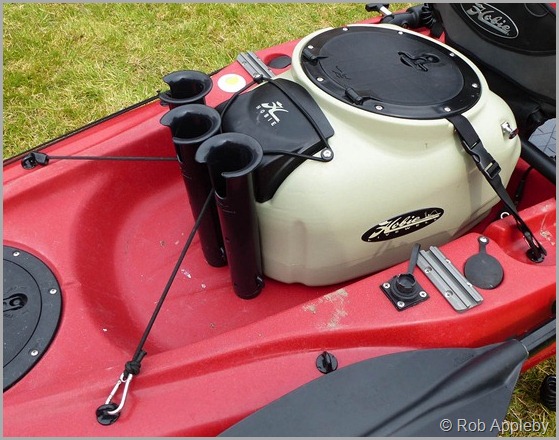 This bungee can be used as an additional securing point and it can also be used to secure the kayak trolley whilst afloat. With the trolley axle positioned up against the flared ends of the rod tubes, the bungee cords pulls it hard into position and secures it tightly to the hull of the kayak. 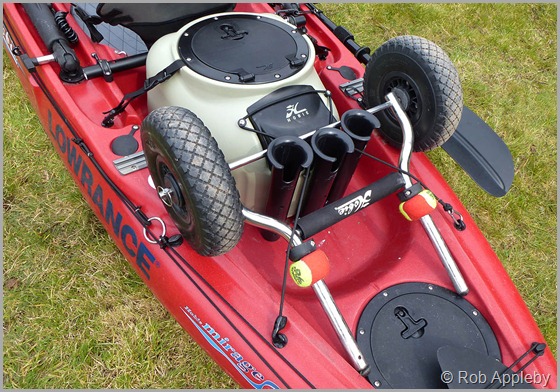 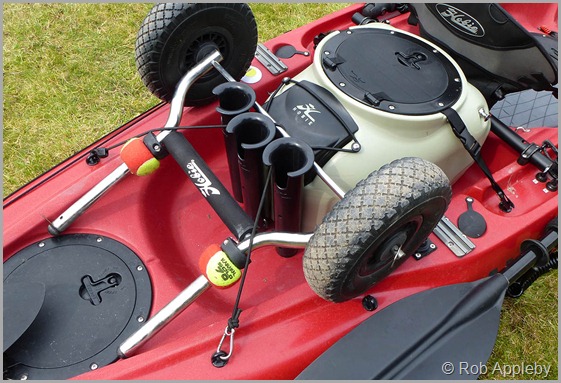 The livewell is internally powered via a rechargeable SLA battery, therefore there’s no need to provide external power to this unit. The livewell sits low in the tank well and will ensure a stable configuration, especially when you take the stability of the Outback into consideration.

You can see in the above photos that the Outback has the centre bar fitted for the Sidekicks. This is a fixed bar and if you haven’t a livewell, and may like one in the future, I’d try and borrow one to permit accurate fitting of this crossbar. If it’s positioned too far back the Hobie livewell will not fit!, if it’s positioned too close to the seat back, the seat will foul it when reclined… just food for thought.

Rigging the Outback for livebait fishing is as simple as that. The existing composite RAM tubes that are fitted to either side of the seat are ideal for this type of fishing. 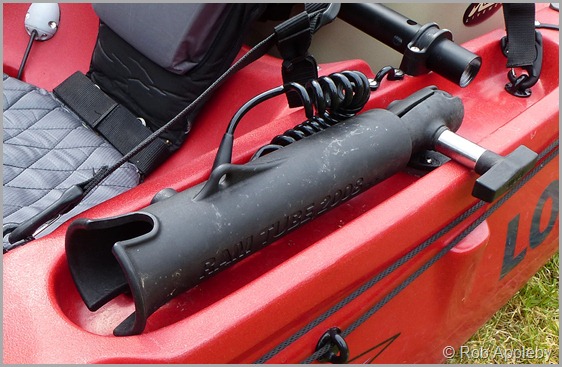 When it comes to trolling I wanted the rods positioned slightly ahead of me, permitting easy viewing of the rods whilst peddling to enable the action of the lure to be closely monitored and well as watching for a bite. If you’re only fishing the one rod there’s no real reason why you can’t just hold onto it. That said, if the weather is particularly cold you may prefer to have your hands tucked into your PFD!.

I didn’t want to further modify the kayak from what I’d already planned so it was a case of working with what I had. I had previously given some thought to this problem before I’d bolted several lengths of GearTrac to the kayak. After looking through the YakAttack website I’d been intrigued to see a Scotty mount fitted to a length of GearTrac by using two MightyMounts and T-bolts.

As much as I’m a huge fan of RAM gear, the Scotty Baitcaster rod holders were slightly better suited for the particular installation that I had in mind. However, after sitting in the kayak it soon became apparent that with the rod holders positioned either side of my knees that I’d be unable to pedal with the rods positioned at right angles to the kayak. 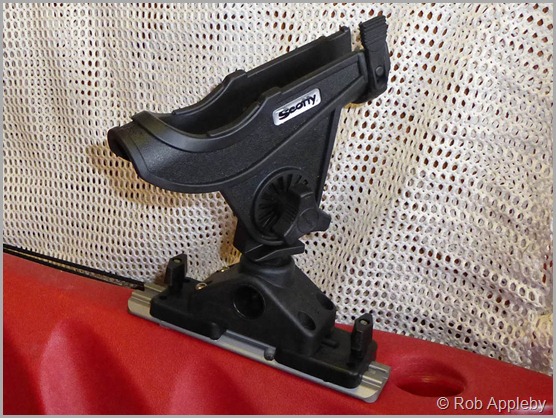 After a little more online research I came across the Scotty 254 vertical extenders. These effectively lifted the rod holders up by around 8-10” and eliminated the fouling issue whilst peddling. They can be fitted and removed in seconds, broken down into the base, extender and rod holder, then stored in the drybox ready for use. 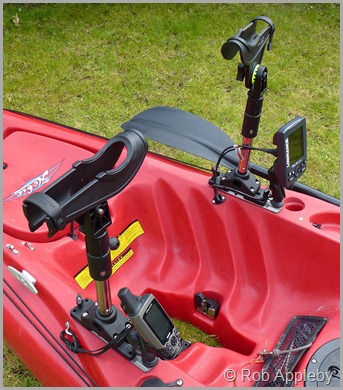 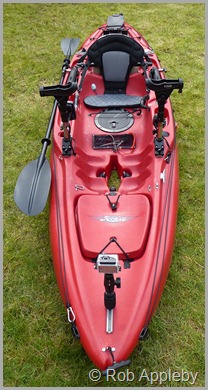 The Lowrance fish finder is repositioned at the front of the right hand side GearTrac, whilst the GPS is repositioned on the left hand side. The GPS loses it’s external power supply in this position, though I’m not overly concerned as the internal batteries provides hours of use. The rods are easily reached from the sitting position, I just have to lean forward slightly to remove a rod. This configuration clearly allows two rods to be fished at the same time.

If you look closely at the right hand Scotty rod holder you can see blue and yellow ‘slip discs’ fitted. These are an optional extra from Scotty and permit an infinite range of locking positions through its range of movement. They also lock the rod holder very tightly in position, in fact they’re far more effective than I’d envisaged. I had these delivered from Escape Watersports and I’d certainly recommend them.

If you’ve already read Part 1 of ‘Rigging the Outback for fishing’ you should be seeing just how versatile the GearTrac system for YakAttack actually is. I’ve used it now for mounting my fish finder, GPS, rod holders, VisiCarbon pole, camera mounts (various), sailing pulleys and a navigation light!. The beauty is that everything is removable leaving only the low profile GearTracs fitted to the kayak.

Along with the setup shown in Part 1 I’ve effectively catered for all the types of fishing that I’m likely to encounter. One hobby which I love to combine with my kayak fishing is photography, my next article will look at setting up the Outback for photography & filming. After all, there’s nothing better than capturing your adventures on a camera.