I’ve spent the last couple of weeks rigging the Hobie Outback for sailing, though I’ll cover that soon in a separate article. To compliment the sailing setup I decided to fit a set of Sidekicks from the Hobie accessory range. The Outback is extremely stable and a very buoyant kayak, however, the Hobie sail is large and the nature of its design has the potential to cause instability in strong crosswind conditions. Sure, the sail control line can be quickly released under such circumstances resulting in a collapsed sail, though if I’m going to be sailing offshore I really liked the idea of some extra stability and peace of mind.

The kit is a simple affair, consisting of 3 metal bars (one permanently fitted to the kayak and two removable bars to mount the outriggers themselves). There are two mounts for the central crossbar as well as two inflatable outriggers, two retaining pins and a puncture repair kit. 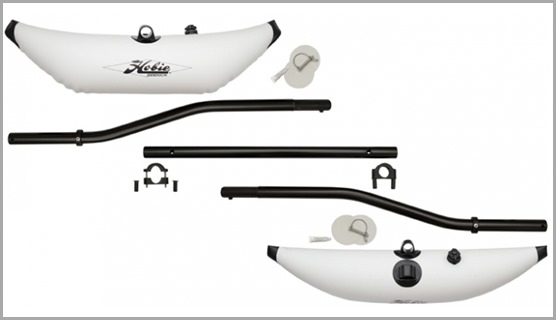 Also included are some well nuts to attach the crossbar mounts to the kayak. I truly hate well nuts, they generally seize and loosen over time and aren’t ideally suited for stress loading. They also require a large hole to be drilled into the kayak, I just hate them!. I decided to avoid the use of well nuts at all costs and use nuts, bolts and washers instead.

There was quite some head scratching as to where exactly I was going to position them. They were going to interfere a little with my current setup regardless of where they were placed. Consideration had to be given to potential fishing setups, that meant trialling any possible solutions with the dry box, livewell and trolley fitted. Consideration needs also to be given to the seat position, especially in a reclined position. 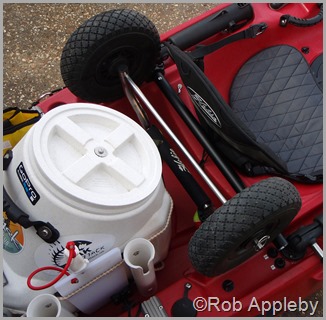 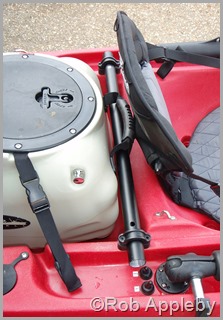 Once I’d finally decided on the position of the crossbar I marked the hull and set about getting it fixed into place. The original plan had been to fitted backing plates within the hull to add additional strength to the mounting points. However, once the first hole had been drilled it immediately became apparent that the hull was particularly thick and rigid at this point (at least 5mm thick) and wouldn’t require any additional strengthening.

The initial 5mm hole allowed one of the mounting brackets to be located with a single loosely fitted bolt. With the centre bar resting in position I viewed the kayak from side on (several times) to ensure that the bar was positioned directly across kayak. Once I was satisfied, a hole on the other side was drilled in situ through the bracket, being very careful to ensure that the bracket did not move during the process. With a bolt loosely fitted on either side the bar was now accurately positioned. The other two remaining holes were drilled and the cross bar was ready to bolt into place. 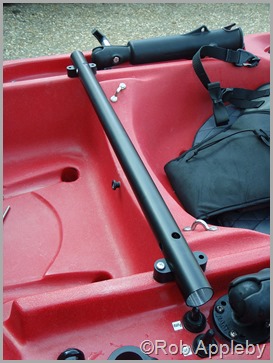 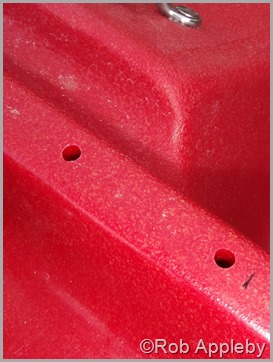 This was actually the most difficult aspect of fitting the crossbar. As I’d decided not to utilise the supplied well nuts I had to gain access to the inside of the hull to fit the nuts and washers. I’m over 6’ tall and have long arms and to say it was a little tricky would be deemed an understatement!. However, after dragging my wife outside to assist, the job was completely in a few minutes. That said, I was sporting a nice bruise on my chin as a result of being wedged up tight against the 8” centre hatch, no doubt more bruise will become apparent later. It was well worth the struggle, the crossbar was securely fitted to the kayak and I’d avoided using well nuts. A little Marine Goop had been used during assembly used to ensure a watertight seal. 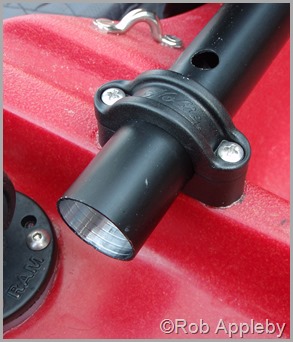 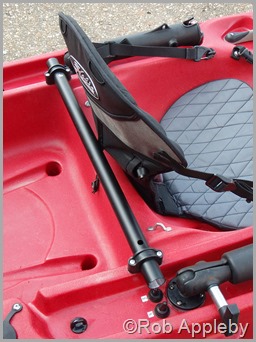 It can be see in the above photo that the crossbar is situated above the switches for the bilge pump and navigation light. Not ideal, though access to the switches is still easy from either side of the bar. It’s a compromise, though I managed to position the bar where I wanted it and I’m happy with the overall fit.

The Sidekick’s outer arms permit the adjustment of the float height with a simple “click-twist-click” (just like a paddle shaft adjustment). 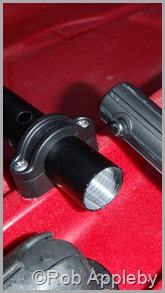 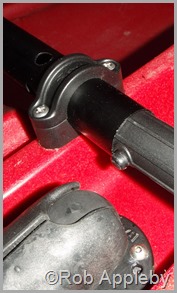 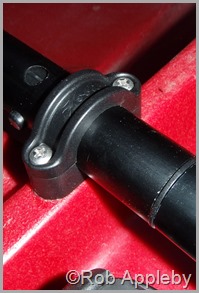 Three positions offer you high – medium – low positions. Set the floats high for cruising (less drag) or secondary stability. Use the medium or low settings for primary stability (less initial roll). Fine adjustments for float height are done by twisting the main crossbar within its mounts and tensioning with the fastening hardware. Obviously fine adjustments are only carried out ashore and on an ‘as required basis’.

The outriggers are a heavy duty rubberised type affair with an inflate/deflate facility and fixed mounting points. The outriggers are slipped onto the outer support poles and locked into place with a quick release pin. Inflation takes 4-5 breathes through a one way inflation valve. The inflation valve sits on top of the deflation connector, both operations take seconds, it’s been particularly well thought out. 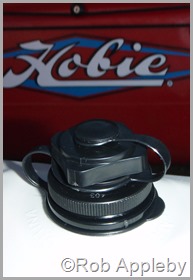 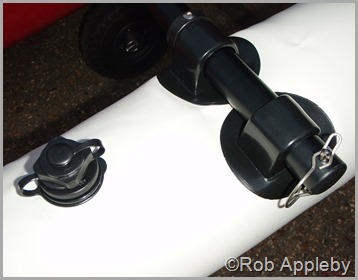 The photograph below shows a close up of a fitted Sidekick. 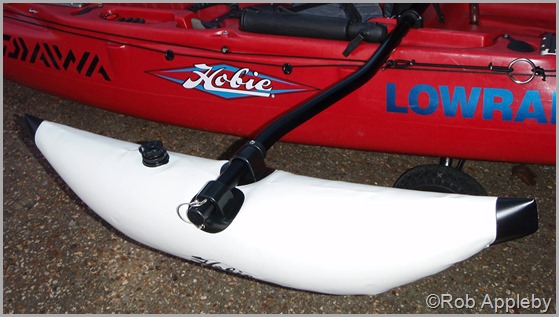 The Sidekicks can removed or fitted whilst afloat if required, it’s a simple case of storing the arms and floats in a hatch as required. Assembling or disassembling is a straightforward process taking only a minute or two.

On a related note, some time ago I upgraded the rudder on the Outback, removing the standard rudder and fitting a Tandem Island rudder as a replacement. As much as the larger rudder would have been nice, I found it way too heavy for comfortable operation and the rudder stow/deploy controls were creaking under the additional weight. I made the decision to remove that rudder shortly afterwards with a view to fitting Hobie’s ‘Large’ rudder (more commonly referred to as the ‘sailing rudder’). It’s a lot larger than the standard rudder, whilst being smaller than the Tandem Island rudder… more importantly it’s a LOT lighter that the TI rudder. The rudder control system now operates smoothly without any ‘complaints’ when raising or deploying the rudder. 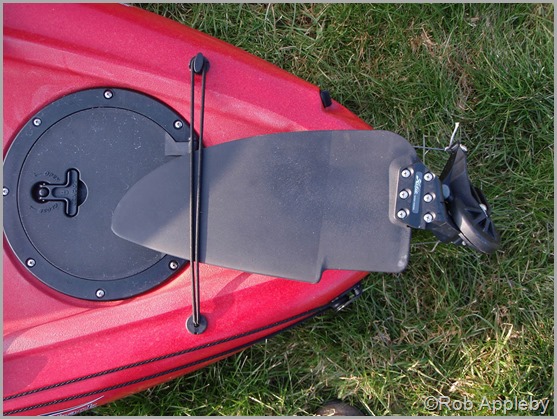 The Hobie ‘Sailing Rudder’ (above) 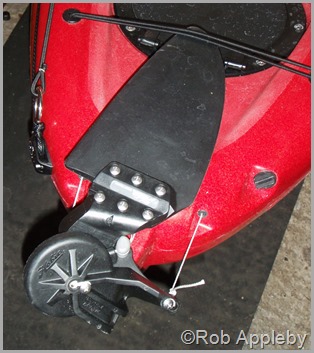 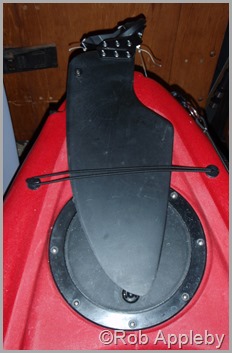 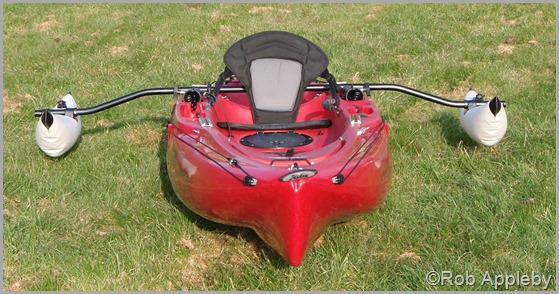 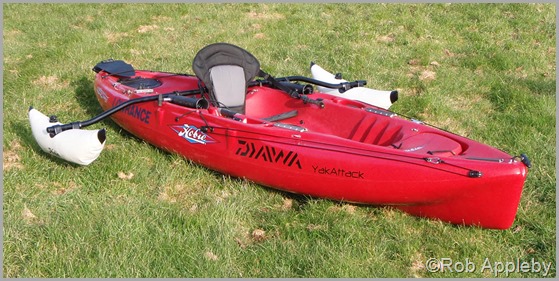 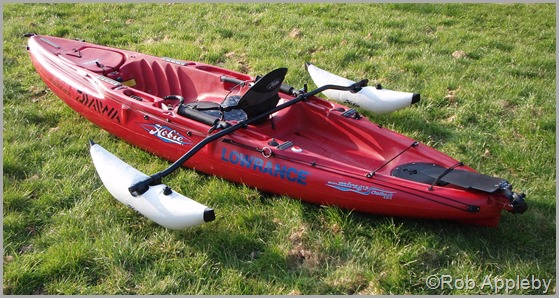 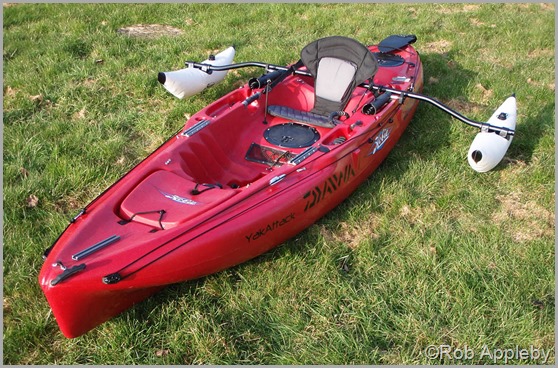 With regards to rigging for sailing, I’ve a a minor modification to complete in order to achieve the routing for the control/furling lines that I desire. The Outback should be ready to sail within the week and I’m excited to get it on the water and begin learning the finer points of sailing!

The Hobie range of kayaks can be viewed and taken afloat for a test at the HobieCat Centre in Poole, Dorset.