I really needed to get to grips with using the sail if it’s to become a serious fishing tool over the summer months. The forecast looked good yesterday with winds of 10-15mph predicted. I packed what was needed (not a lot compared to a fishing trip!) and drove the short distance to the beach. I couldn’t believe it when I arrived, it was flat calm with barely a breathe of wind. I drove straight home, somewhat disappointed, hoping that the wind would pick up as the day progressed.

I drove down again late in the afternoon and things we ‘marginally’ better. To be honest it was still very flat, though the low clouds were moving along at a good pace which gave me a little hope. I decided an hour on the water was better than doing nothing, so I rigged up and headed down to the waterline. 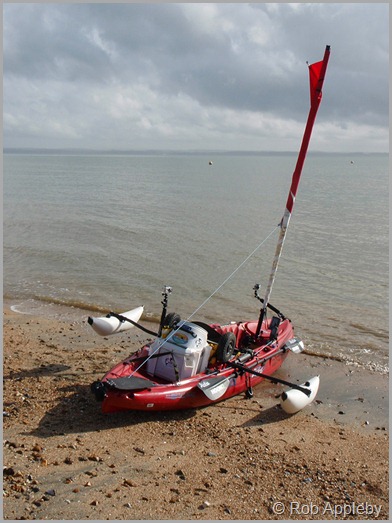 The outriggers were fitted as I was hopeful that the wind would pick up, plus when I do go fishing with the sail for a day long or overnight trip, I’d be fitting them for sure. Once on the water I made sail and was immediately pushing along at a steady 3mph, surprising considering the apparent lack of wind. I messed around for a while, sailing with, against and across the wind.

The wind began to increase, that bought higher speeds and the fun factor increased no end!. I found myself sailing along at a steady 4-5mph, occasionally pushing a little faster. Even against the wind, close hauled, I was maintaining 2-3mph, better than I’d expected. 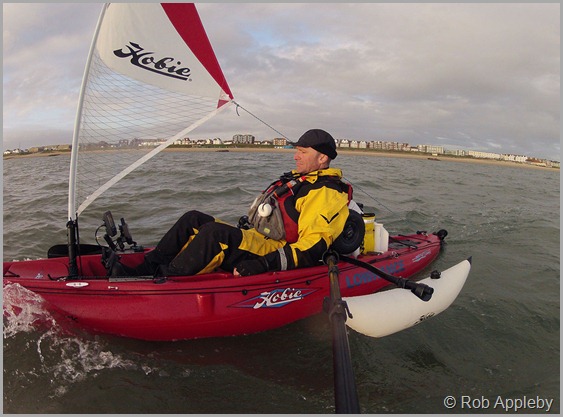 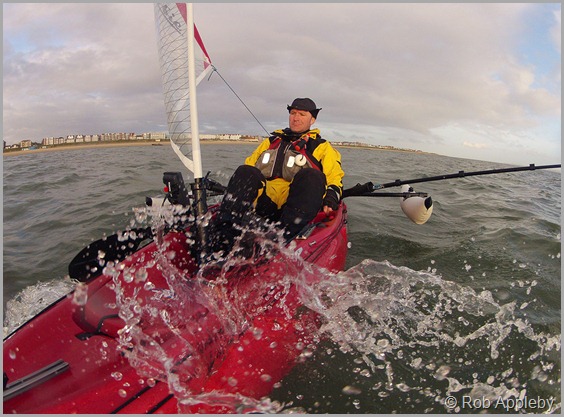 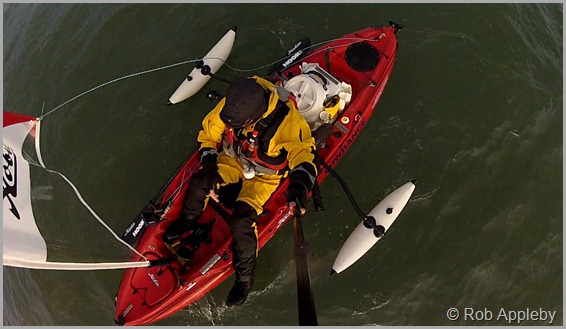 I sailed well over 6 miles in 2.5 hours, some of that time was spent on the drift messing around with my new Lowrance 4x DSI fish finder, getting to grips with that. I had a play furling and unfurling the sail in the higher wind, again, just to get a feel how it felt in different conditions. It proved quick and easy regardless, turning the kayak into the stronger wind minimised any potential of things going wrong. 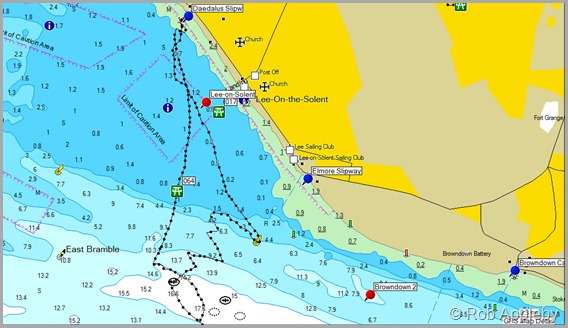 I did notice towards the end of the trip that the insert on one of the Sidekicks was showing signs of coming loose. It’s apparently quite a common fault and is apparently easily remedied with some better glue, or a self tapping screw to keep it locked in place. I’ll have a look today and decide how best to address the issue. It’s minor stuff, keeps me busy!

Right at the end of the trip, as I approached the slipway, I was keeping a close eye on the depth to avoid grounding out the Mirage Drive fins. I was still in a comfortable one metre of water, when about 50m from the beach when I suddenly grounded out!. The depth has dropped to 20cm and the drive was hung up. I managed to free it and pull it out, not cursing… not much anyway. It turns out that the slips runs flat for a good 60-70m underwater, something I then recalled from a trip there 3 years ago. Oh well, a slightly frustrating moment right at the end of the trip, nothing is ever perfect!

Below is a short video, a little slow to begin with due to the light winds, though as the wind picked up so did the fun.

Read about your DIY Furler with great interest and strongly agree that some type of reefing or furler device is required when sailing.
I am in the process of setting up a 2015 Outback for sailing and have one question on your Furler:
When reefing the sail, do you disconnect your down haul on the mast, or can it stay in place?

Hi Chuck
It stays in place, though I lengthened the original line so I could clip it down to one side of the yak with the sail furled. Just to keep it out of the way whilst fishing.