Below is a short video and a few photographs showing the basic installation and test of a Rule automatic bilge pump into my Hobie Outback. 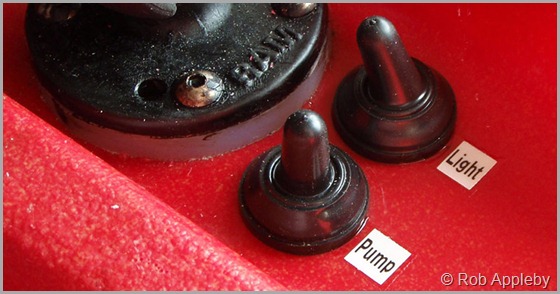 People keep asking 'why?'. Seems an odd question to me...

ANY kayak has the potential to start leaking, whether it be a cracked scupper, perforated hull, open drain plug, leaking hatch, etc. It's piece of mind should the worst ever happen. No different from carrying a manual bilge pump,flares, radio, paddle float, throw line, strobe lights, compass, etc.

The advantage over a manual pump is that in this case it operates electrically, manually or automatically (model dependent), you can head into shore without being sat their pumping. What's the chance of it ever being used?, hopefully nil... but there again we say that about all the other items of safety equipment that we carry with us.

It was suggested on a UK fishing forum that my 7aH SLA battery would be drained in no time by this pump, especially as I run my FF, GPS and navigation light off the same battery.

The current draw of the Rule 500gph pump is 1.9A, the Elite 4 DSI pulls 0.75A, navigation light 0.2A and my Garmin 60CSx 0.15A (these are all manufacturers figures). That said, I've used the Lowrance and Garmin for 10 hours with the battery still showing over 12V. That did raise questions over the ACTUAL current draw of these items.

So I popped into the garage and broke into the circuit with a multi-meter and took some readings.

Looking at those figures, during a night trip, my current draw is 0.37A. Even if I was afloat for 6-7 hours I'd have used well under half the battery capacity. Theoretically that give me at least two hours bilge pump running time (using the Rule current draw figure of 1.9A). That's MORE than enough to get me back to land should the worst ever happen.

That's great Rob and thanks.