Ok, so the previous day had proved totally fishless, for me at least. Today was going to see the Team trying for bass around the islands of Zeeland. The location was another bridge, a particularly long bridge in fact!.

After a continental breakfast we headed off to The Hobie Shop in Colijnsplaat. Adjoining the Hobie shop is Bass Hengelsport, a cracking little fishing shop.

It was good to browse around the fishing store as there’s many items of tackle for sale that aren’t available here in the UK. There was large range of butterfly jigs and as I’ve recently purchased a vertical jigging rod for this months road trip, I picked up a selection to try out. They also had an huge range of loose soft baits for sale, needless to say I picked up a few examples for testing purposes!

Once I’d finished spending money on bait and tackle I headed into the Hobie shop where I had the opportunity to meet a few anglers who I’ve only chatted to online. It really is good to chat to keen kayak anglers, seeing the kayak angling scene from different angles is always very interesting.

Johan, one of the Dutch guys, sat us all down and proceeded to give us a thorough brief on the venue and tactics. I found this particularly useful and it certainly provided some confidence prior to getting afloat. The method was going to be drift fishing, specifically with what was effectively a ledgered ragworm fished just clear of the seabed. Should I bite be felt the bait was to be free-spooled for a few seconds prior to tightening up into the fish. Should a mackerel be caught it would give the opportunity to livebait, which is apparently the killer method for the larger fish. Rigging the livebait would be no different from fishing worm.

With the briefing over and a spot of lunch demolished in quick time, it was time to head back over the bridge to the launch area. Launching required carrying the kayaks down the seawall, not a great issue with so many people around. 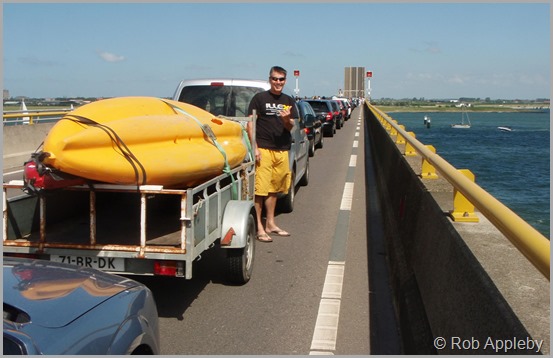 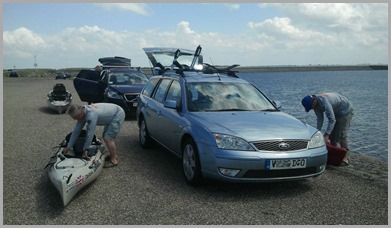 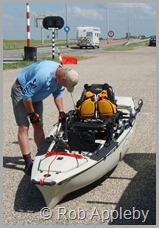 I decided to take two rigged rods afloat, both rigged the same with a 1.5oz egg-shaped bullet lead on a running ledger with a 2’ 20lb fluorocarbon trace. The idea was that should I break one set of gear I could swap straight over, or perhaps rig one quickly with livebait should I catch something suitable.

Once launched it was a short peddle out of the bay to the bridge itself. These large bridges are truly great feats of engineering, they provide a lot of structure and generally hold some good fish. The weather was far from ideal, the wind was blowing and the sea particularly lumpy in the more exposed areas. The drift speed was somewhat quicker than I’d hoped for, so I ended up deploying a drogue from the nose which slowed me down considerably. 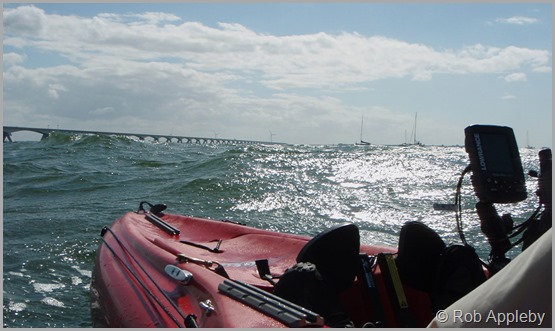 As per the previous day the fishing was proving to be difficult!. The drifts were a little unpredictable due to the changing wind and the sea floor shelved up very quickly at times. I had to pay close attention to the depth at all times as it was proving all too easy to snag the bottom. Most of the fishing took place between the first and second bridge pilings, with the depth varying between 5-17m. There were no fish being caught between the Team members which was proving a little frustrating. 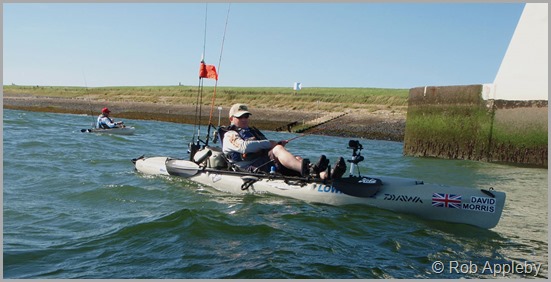 I finally had a hit whilst drifting below the bridge and after allowing the bait to free-spool for a few moments I tightened up into a rather lively fish. After a couple of hard plunges it settled down and came towards the surface. Just as I expected to make visual contact with the fish the line went slack, it was gone.

We continued fishing, drift after drift, trying many different areas around the bridge. Eventually, right next to me, one of the French Team members hooked up. 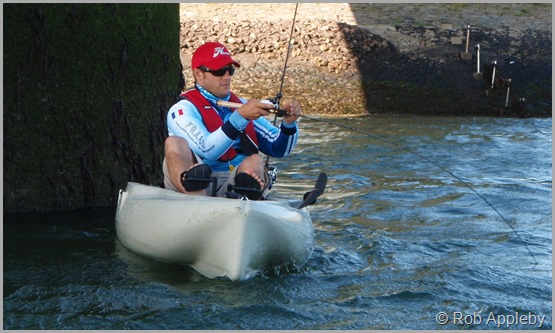 I have to say that when the fishing is tough it’s nearly always the two French guys who manage to pluck out a fish. After passing him my net he proceeded to land a nicely conditioned Bass of around 3lb. So they were there, perhaps not in numbers, perhaps off the feed… who knows.

This particular location is also favoured by the scuba divers who regularly visit this area to view the breeding seahorses which I was told frequent this venue. You watch these scuba divers rig up on the steps 20-30m away from where we were at times fishing, before submerging out of sight. Now call me crazy, but if I turned up to dive and saw many kayaks fishing the area that I intended to dive, I’d probably have a change of heart and go elsewhere. Not these divers!, not even so much as a dive flag, there’s just out there.

At one stage I was drifting below the bridge and turned to see a bizarre looking flat circle of water about a metre across, directly in my drift, only a few metes away. I was drifting towards it quickly before I noticed the streams of bubbles around the edges of the circle. Geeez, a diver!!, I peddled quickly back up tide to begin a drift elsewhere, crazy or what!?. David Morris said later that he’d seen a couple of divers on his fish finder!.

By this time we were getting hungry and Bram Hullekes has ordered a truck load of pizzas to be delivered back at the seawall, how civilised. It provided a pleasant break to the fishing and some much needed sustenance. 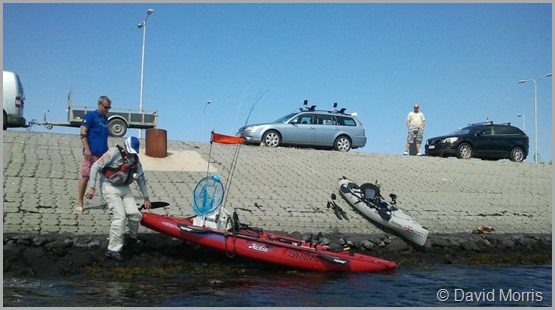 With only a few crumbs remaining in the pizza box it was time to head out and fish into the evening. I was quite hopeful that once the bright sun dropped towards and below the horizon, that there was really good chance of hooking into a bass.

We continued to fish into the evening and at around 7pm the other anglers decided to call it a day, however, myself and David chose to fish into dusk. The wind was easing off dramatically and it was turning into a stunning evening afloat. 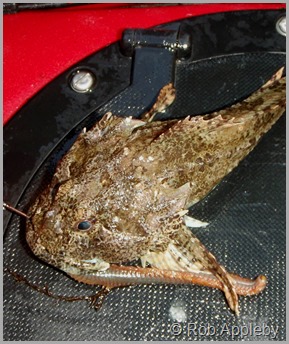 So I continued drift and drift with my livebait swimming beneath the kayak. At times it became a little excited and I was waiting with baited breath, expecting to be smashed hard. It just didn’t happen. With the setting sun we started to resign ourselves to the fact that we weren’t going to catch a bass. The Scorpion fish was unhooked and he swam off quickly, no doubt counting his blessings. 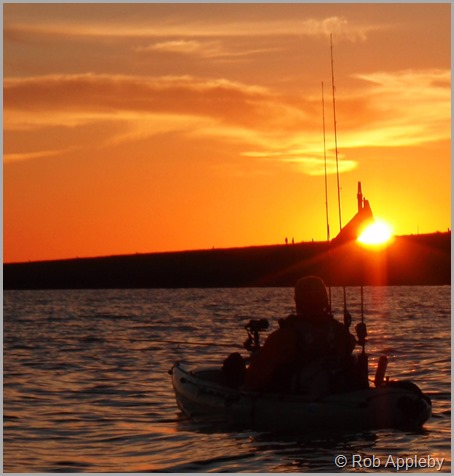 That concluded another day afloat, another frustrating day, yet another very enjoyable day. A couple of the Team members were waiting for us when we returned, not something we were expecting. We both felt a tad guilty as we’d not expected anyone to hang around and wait a couple of hours for us to return. However, those guilty feeling melted away whilst we shared a few cold beers at a local bar. Tomorrow would see us have another crack at the Zander, third time lucky??