Today saw the weather deteriorate considerably. The forecasters sadly got it right, 15-20ph winds, gusting to 25mph, far from ideal. I launched from Cadgwith and initially headed south. The sea was a little lumpy, perhaps a 3’ swell with a slight chop, perfectly doable. However, within a couple of hundred metres of passing the headland the sea lifted into 6-8’ swells. This in itself was doable, but the swells started to break so I decided to err on the side of caution and did an about turn!

I tried a multitude of marks over a couple of miles with only a few small Pollack to show for it, it was proving quite difficult. I decided on a complete change of location. My local contact had suggested a few marks further north, a good three miles from my current location. I hoisted sail and set a direct course. The wind was gusting quite hard so some concentration was required to avoid any potential of capsizing, though having the Sidekicks fitted minimises this risk dramatically. 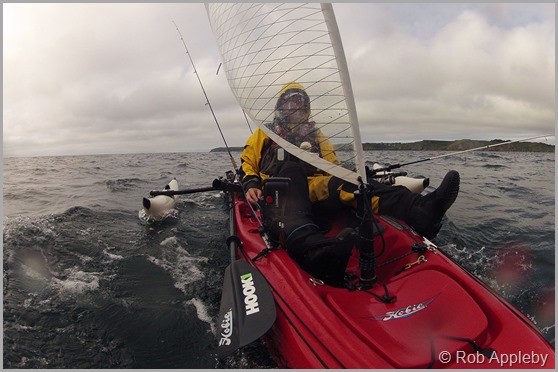 In thirty minutes I’d sailed across the bay at an average speed of 5.5mph, not bad!. With the sail furled I started to fish and soon myself hooked up into some nice sized Pollack. Not monsters, but enough to put a bend in my rod and provide some good sport.

I hooked into one fish was didn’t put up much of a fight at all. It was all to clear as to why when it broke the surface. It was badly damaged by some discarded fish net which had embedded itself into the fish causing severe damage. It was quite a wonder that the fish was still alive, I’ve not seen anything like it before. It was in very poor condition and was quickly released. 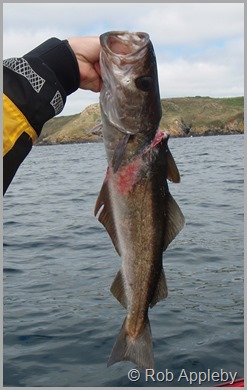 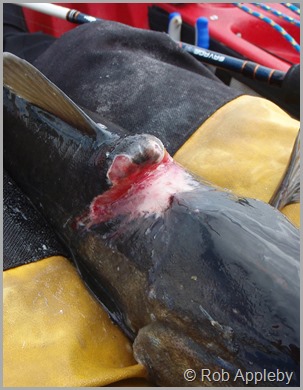 I tried a few marks, discovering some interesting features on the fish finder whilst moving around. I was drifting over an area of clean ground, in between two marks, when the lure was hit hard. Or had it been?, it felt more like a snag when I pulled into it.. however, the snag was moving!. I lifted the fish 2-3m off bottom before it pulled line from the reel. It came up again before nodding hard and going back down. Seconds later it spat the hook!. I reckon it was a big cod, who knows.

At times the Pollack just pluck at the lure, other times they hit it rather half-heartedly. It can get rather frustrating when you miss one fish after another as can be seen in the short video clip below.

I picked up a couple of Ballan and Cuckoo wrasse, both are pretty fish, the Cuckoo’s colours are quite striking. 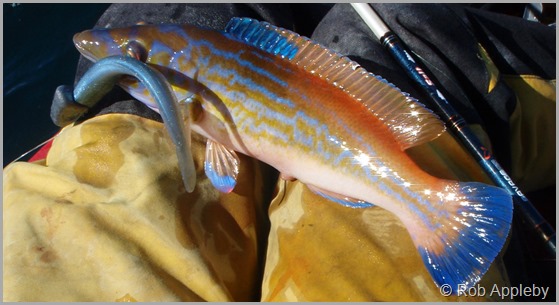 After much jigging I decided to take a break and started throwing some small lures into the foaming water close to the shoreline. I was hoping to find some Bass, but the Pollack thought otherwise. I was hooked up first cast before taking another two small Pollack within minutes. I’ve heard that the Bass are rather thin on the ground at the moment. I’ve managed a few school fish, hopefully I’ll manage something bigger over the next few days. 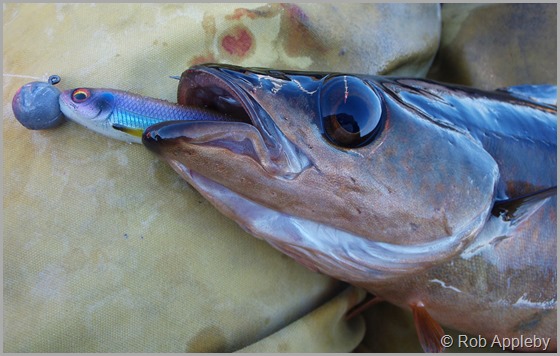 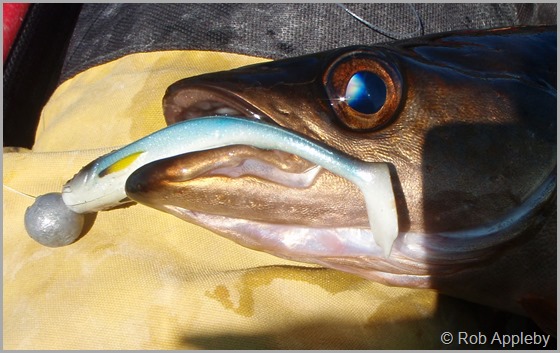 It’d been another great day afloat, sadly the bigger fish were making a mockery of my efforts to catch them. I’ve now hooked into three big fish and lost them all. However, I have faith, it’s only a matter of time before I get a run of good fortune. I’d still managed about a dozen nice sized Pollack to 6lb and some Wrasse. I didn’t take much video, though there’s a short clip below catching a little of the action.

I was still three miles from my launch site and I’d been afloat for eight hours. The wind was still in my favour so I unfurled the sail and headed back to Cadgwith. 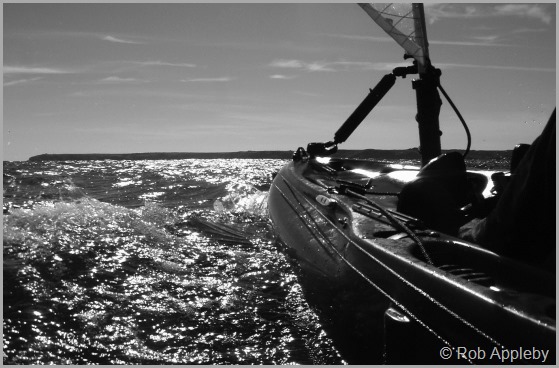 I’d clocked up just over fourteen miles during the session, most of that under sail. I’m really enjoying the combination of sailing and fishing, it’s opening up a world of possibilities.

I’m planning a day off tomorrow, fishing everyday is rather tiring!. The combination of the fresh air, early starts, late finishes and a few ciders are slowly taking their toll. On Sunday it’s the annual fishing competition at Cadgwith, weather permitting I’ll be taking part.