Yesterday had been a rather long and somewhat tiring day, I didn’t get up until 10am today. The plan was to fish late afternoon into evening with Sam & Ian, so I burned a few hours sorting out some gear in anticipation of the session.

We rigged up and launched from the small fishing hamlet of Cadgwith, as for the intended fishing grounds, well I was being guided by Sam so I’ll keep that information to myself. Pollack were the target species so that was going to mean fishing rough ground, perhaps some deep water marks. The method was to be jigging and due to the potential depths allied with the tide and wind, 4oz or more would be required to be able to fish effectively. I was fishing with a Daiwa 3000 sized reel spooled with Daiwa’s own 30lb Tournament PE braid. This was terminated with a length of 25lb fluorocarbon line. The rod was my new Savage Gear vertical jigging rod that’ll handle jigs just over 5oz (150g). The jig head was fitted with a large white shad, though I carried a selection of soft lures that could be called upon as required.

Once rigged up the three of us peddled out, yup, we were all on Hobie kayaks. Myself and Sam on an Outback, with Ian on a Revolution 13. Sam isn’t making a call in the photo below, he’s navigating with the Navionics charts on his phone! 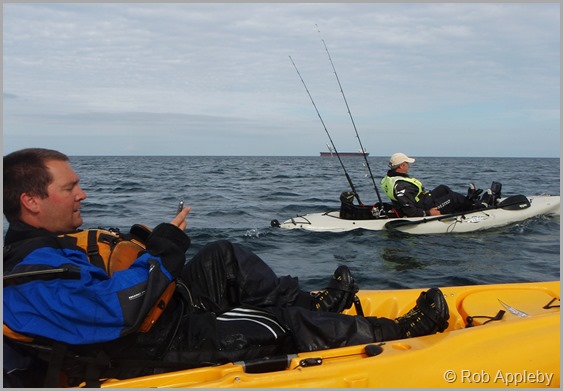 After a reasonable peddle we’d reached the first mark and proceeded to drift over it several times. It was fairly quiet, with just a few plucks to the lures. After a few knocks I found myself hooked up and a minute later I pulled a colourful Ballan Wrasse onto the kayak. Despite the size of the lure, it had no issues whatsoever in hitting it hard!

The mark didn’t produce much action so we moved off to another mark close by. Having a GPS with charts really does make a huge difference when trying to put yourself over potential fish holding marks. I could happily do without the fish finder, though I’d hate to be without the GPS, especially when fishing such varied ground.

As I peddled past Ian he hooked up into a fish. It turned out to be a nice sized Pollack and it clearly gave a good account of itself. 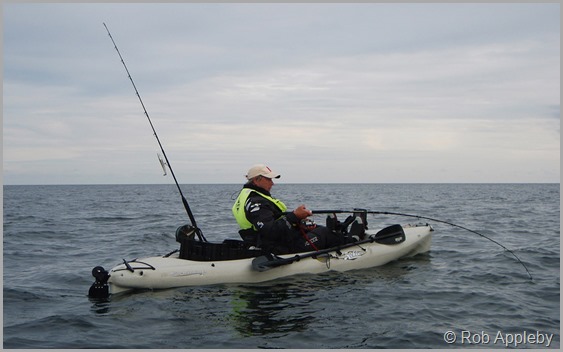 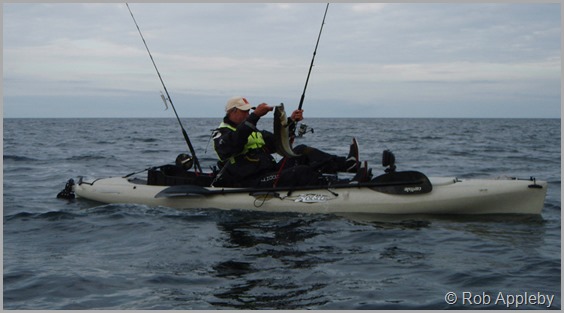 I had to chuckle when I saw Ian’s huge Alvey side cast reel, I’ve not seen one of those since I was a kid. They used to be all the rage with the shore fisherman in the 60’s & 70’s. That said, Ian was quick to point out that it’s ideal for this sort of terrain due to it’s high rate of retrieve… makes sense!.

I’d noticed that Sam was heading north so I left Ian to fish the mark whilst made chase after the yellow Outback in the distance. I caught him up whilst he was drifting and I was quick to get my lure down and join the drift. Fish finders, I never use them for finding fish, purely for checking out the depth and the structure. However, I could clearly see large fishing not only close to the rough ground, but also hanging 3-5 metres from the bottom. It was great to see and it resulted in some hard takes and ultimately in some hook-ups!. Sam does seem to be a fish magnet and he was soon into a good sized fish. After several hard dives a  large Pollack of around 10lb was dragged onto his kayak, cracking fish! 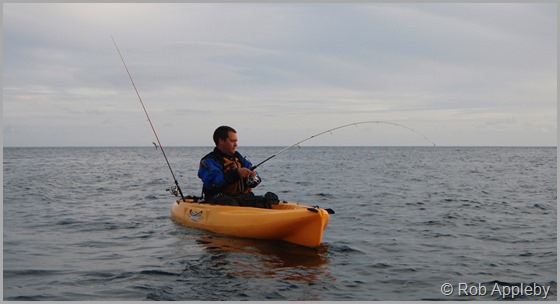 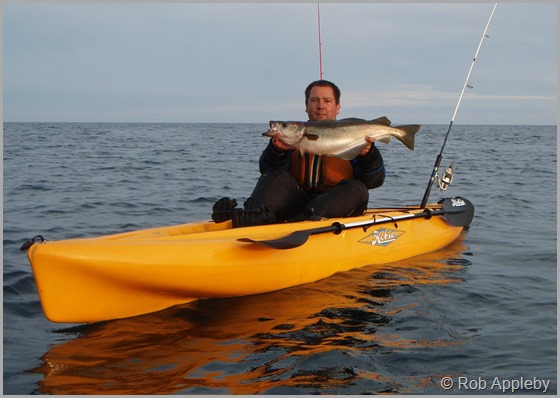 I also hooked up and it gave a good account of itself. A nice sized Pollack was the culprit and after a couple of photos it was released to fight another day. 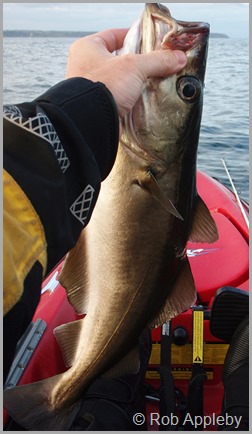 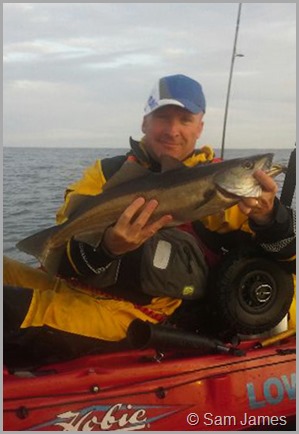 We continued to drift over this mark as it was clearly holding many good fish. I missed a few hits which is exciting and frustrating at the same time. I found myself hooked into a big Pollack and it dived hard for the sea floor. On the second dive I decided to add a little extra pressure to the spool with a finger and the line broke. I was totally gutted and to be honest I’d acted on instinct. When I’ve previously fished for Pollack, it’s been over large kelp beds and if the fish gets in there it’s usually lost. Sam was to later point out that often when they reach the bottom here they just swim about until you pull them back up. A painful lesson was learned that’s for sure!

Whilst I was feeling sorry for myself Sam hooked up again. It was clearly another good fish and after a few minutes he pulled another big Pollack aboard. It’s not everyday that the kayak fisherman next to you lands two 10lb Pollack in a short space of time!. I missed a couple more fish then the fish just seemed to go off the feed. The light was beginning to fade and after a couple of fruitless drifts we decided to call it a night. The wind had dropped off and it’d turned into a perfect evening.

It’d been an exciting session. Ian had departed earlier in the evening, we learned later that his perseverance over a particular mark had produce a large Pollack of around 12lb. It’d been an exciting session as well as being a steep learning curve. I’d lost a few jig heads and associated lures as well as being broken off by a good fish due to being a little impatient and inexperienced with regards to the techniques and ground we were fishing over. Sam had two large Pollack in his tankwell, a cracking result. 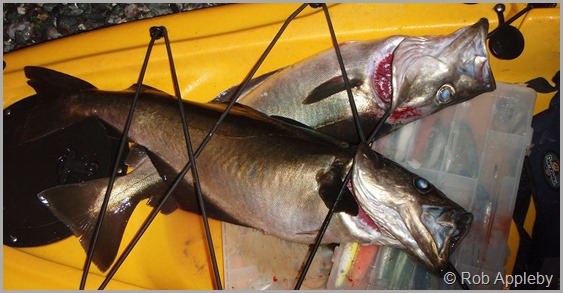 A couple of pints of cold cider served up from the pub that’s only yards from the launch site provided a perfect end to a memorable session afloat. The forecast for tomorrow is ok, though rather breezy, with wind forecast at around 15mph, gusting to 20mph. I’ll be looking for a little shelter as well as some more fish… watch this space!