Two to three months ago there was talk of organising a fishing meet for the Hobie Team Europe members over in the Netherlands. A quick check of the calendar pretty much ruled it out as being a possibility as that was going to be the start of my trip around the South West of the UK. However, an unexpected change to my summer holiday dates (actually I screwed them up!) made travelling to the Netherlands totally doable. After a brief chat to Dave Morris, one of my UK Team mates, plans were made and the ferry from Dover to Calais was booked.

The location was Zeeland, just south of Rotterdam. This was going to mean a road trip of 300 miles just to get there, with a cross Channel ferry in between. 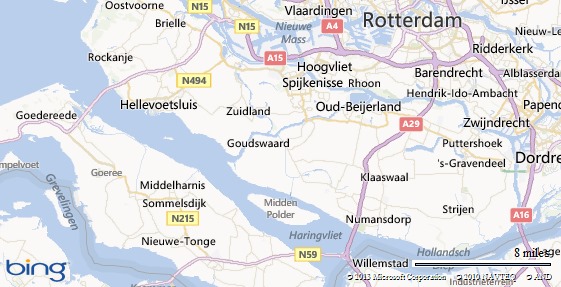 The Team had arranged to meet up for a BBQ on Thursday evening with the fishing planned to commence on the Friday morning. Neither of us could get the Thursday off work to travel so we settled on catching the ferry at 4am on the Friday. This wasn’t exactly ideal as it meant me leaving the house at 11pm Thursday in order to collect Dave, catch the Ferry and make it Zeeland in time for a decent day on the water. We also needed to purchase a fishing licence along the way.

I’d not carried two kayaks on the roof of my current car, though with a pair of Malone Wings and Thule J-bars both kayaks were loaded onto the roof with the minimal of fuss. It’s amazing how much gear you tend to take for these trips away, the car was fairly full!. The trip went smoothly, though the plan to sleep a little on the ferry failed miserably, something to do with the incredibly uncomfortable seating. We made great time and arrived at Hobie Europe HQ at around 9am. Things had gone too well, so to address the balance I reversed into a very short 12” square post. With the rear bumper suitably modified we headed into Hobie HQ.

We were the first Team members to arrive that morning, the BBQ and social from the previous evening clearly having taken its toll. Despite being a little disappointed that we wouldn’t be fishing until later, I quickly came up with a Plan B… lie horizontally on the nearest comfortable seat and sleep. A couple of hours later I returned to the land of the living feeling as though a sixteen wheel articulated lorry had driven over me several times. A BBQ lunch bought me back to life and with a fishing permit purchased we readied ourselves for a Zander fishing session.

We travelled across country for thirty minutes or so before arriving at the top secret Zander fishing mark. Ok, perhaps I just can’t remember the name of it!. It was a large bridge spanning an area of brackish water. The launch site deserves a quick mention. After rigging up in the car park we dragged the kayaks over a sandy tourist beach to the waters edge. The scenery was quite stunning, bikini clad young ladies left and right, I’ve experienced worse launch sites that’s for sure.

Fishing was with soft baits mounted onto a light jig head of 15g. I used small shads and flukes of various colours. However, as the wind picked up during the day I increased the weight to around 30g to compensate for the speed of my drift. As I mentioned, the main mark was a large bridge and the fishing took place in and around the large pilings. In all fairness we’d not been briefed on the finer points of catching Zander, plus I’d not read up on it before I’d left home. However, we were told to fish close to the bottom, the depth varying from about 4-12m. 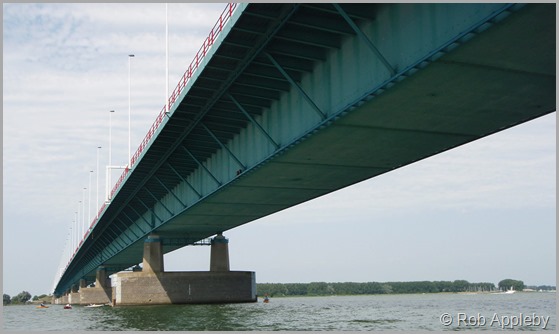 The fishing was difficult and slow for everyone there. I’m quite sure that the heat and intense sunlight was a major factor with regards to the lack of fish. I tried all depths of water, in and around structure and well as fishing more open water.

I did eventually get a hit to my lure, and what a savage take it was!. Now this is where my total lack of experience with Zander fishing let me down. Normally if I get hit on a lure I just continue the retrieve waiting for the fish to hook itself, which is what I did in this instance. Having missed the fish I later chatted to Johan, an experienced local angler, who pointed out that it’s very different with Zander. When you experience a hit to your lure that you need to strike quickly and hard. Once you’ve missed that bite the chances are that it won’t try again. I had another good hit later in the session, though at the time I was unaware of how best to handle these bites so another potential fish was missed. Still, at least the scenery was cracking!

There were a couple of fish caught by Bram and Johan, there was four in total I think. Sure, they weren't the big Zander that I’d been hoping to see or catch, though it was just good to some fishing coming out despite the difficult conditions. 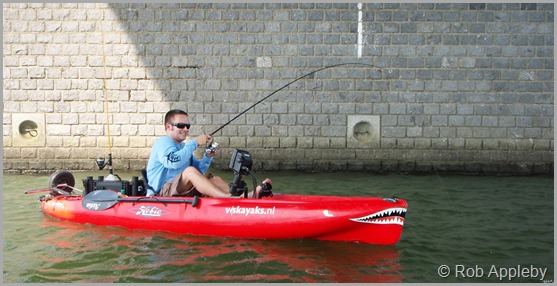 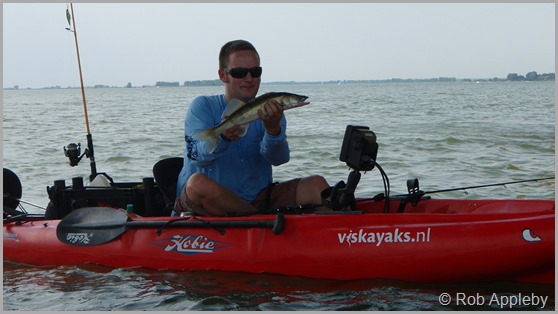 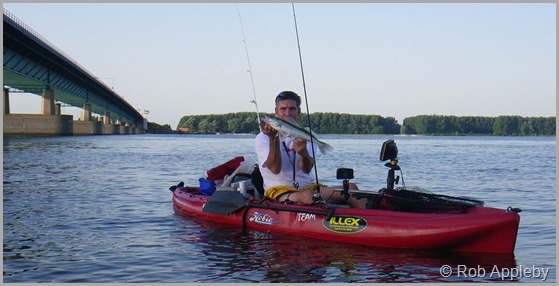 So despite missing a couple of good hits it’d been an enjoyable day afloat. We headed back into the beach to recover the kayaks and to enjoy the ‘scenery’ scattered along the beach. It was good to get back to fishing with lures. I’d mentioned earlier in the year that I intended to resurrect my lure fishing and I’m gradually increasing the amount that I’m doing from the kayak. The day concluded with a bite to eat in a local cafe, it’d been a long and tiring day and despite the lack of fish it’d certainly been an enjoyable one. The second day would see us trying for Bass, more to follow soon!