I packed the car full of camping gear and enough tackle to cover just about any type of saltwater angling. The original plan had been to camp my way around the county, however, the campsites are charging what I consider to be ludicrous prices. One person and a small two man tent was attracting prices of between £18-23 per night!. That’s not far off ‘bed and breakfast’ prices, some roadside hotels offer similar deals. So I provide the tent, the bed and probably have to pay for the shower… I just don’t see how they justify those prices. Rant over.

Anyway, I decided to grab some free accommodation at the local Naval Air Station at Helston (perks of the job) which put me in easy location of both the north and south coasts.

If I wanted to bait fish I’d either have to catch it, buy  it or dig it. Though to be honest I was more interested in lure fishing. I’d made a load of jig heads, packed plenty of soft baits as well as a box of smaller lures for casting or trolling. Species wise I was aiming for Pollack, Bass and Wrasse with the chance of all sorts of other species making a show.

After a somewhat lazy weekend I travelled down early on the Monday morning, the journey being around 240 miles was expected to take a good four hours or more. Once on scene I organised my accommodation before making the most of the day and getting afloat!. I chose to launch at Porthoustock as it was familiar ground and should produce a few fish to get me off the mark. 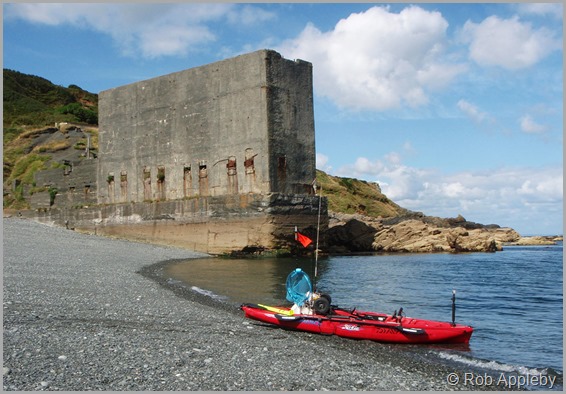 I planned to drift over the Manacles in the hope of hooking up with my target species, however, once out of the bay the conditions weren’t quite ideal. Sure, it looks quite idyllic in the above photograph, though the small bay was well sheltered from the wind and once further out the water was choppy with an accompanying stiff breeze.

I’m not one to put off easily so I stuck with the plan and drifted, fishing a jig head fitted with a decent sized shad soft lure close to the bottom. To say that the depth varies considerably in this area is quite the understatement!. The sea floor comprises of many steep pinnacles which can rise from 20-30m to the surface in the blink of an eye. There are many mounts just below the surface so a close eye is required to watch for disturbed water, highlighting potential underwater hazards. Even with a GPS and underwater charts, you still need to keep a close eye on your surroundings at this venue. In the photo below I’m drifting quarter of a mile offshore in about 17m of water, however, rocks are breaking the water ahead of the kayak. 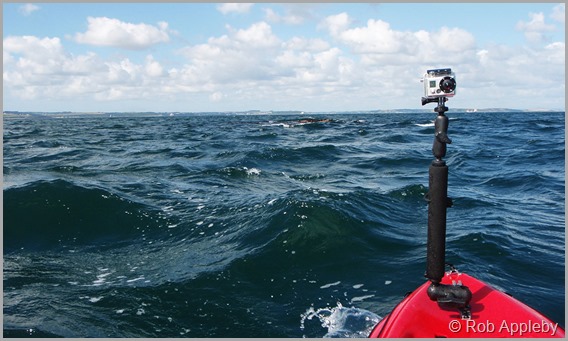 I experienced a few plucks and hits to my lures, though I was having no luck achieving a hard hook up. I swapped the lures a few times with no real success. I was drifting faster than I’d have liked, often reaching 2mph. Despite using fine 30lb PE braid line with a 4oz jig head I wasn’t achieving the feel I would have liked.

I noticed a fishing trawler heading in my direction when he was a mile or more away. I was drifting, yet he always seemed to be on a direct course for me. When he was within a hundred yards or so I peddled a little to push away from him, yet he kept on coming. Needless to say I wasn’t too impressed at this point and decided to wait until the last few moments to push away hard if required. As it happened he did steer clear of me, by all of about 3-4 yards at most!. He wasn’t hanging about and his bow wave lifted me up as he came alongside and I rode quite heavily over his wake. I mean seriously, what is wrong with people??. Apparently it’s a problem with the local fisherman who consider the area theirs and don’t appreciate other folk on the water. I wish I’d taken photographs and reported the idiot.

I wasn’t having any real luck fishing jig heads so I switched over to a bit of trolling. I’d rigged the Outback to permit the fitment of up to two Scotty rod holders mounted onto vertical extenders. These are fitted to a length of YakAttack’s GearTrac using a Gearhead adapter. This permits me to have the rod(s) ahead of me whilst still being able to operate the Mirage Drive. 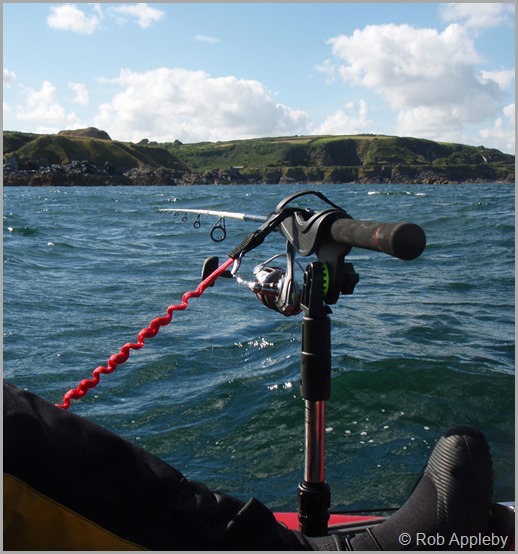 I tried several hard lures with only one small bass to show for my efforts. Just for the sake of catching a few fish I rigged up a string of feathers with a 3oz butterfly jig for weight. I moved inshore out of the weather and made a few drifts across a small bay. I was almost immediately into fish, not sizeable, but it felt good. There was string after string of small Pollack, all around a 1lb in weight. Though with 3-4 on at time, it was providing quite some entertainment on my light tackle. 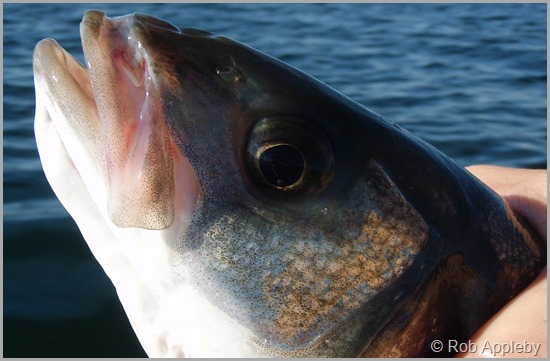 After picking up a multitude of Pollack, half a dozen school bass and a handful of mackerel I decided to call it a day despite having only being afloat for under three hours. It’d been an early start to the day, a fairly long drive followed up with a bit of fishing. I really fancied a couple of cold drinks, a shower and a comfy bed!.

I hugged the coastline on the way back and nosed around a few of the coves. It really is a picturesque spot and it was very pleasurable just doing a little sight seeing. 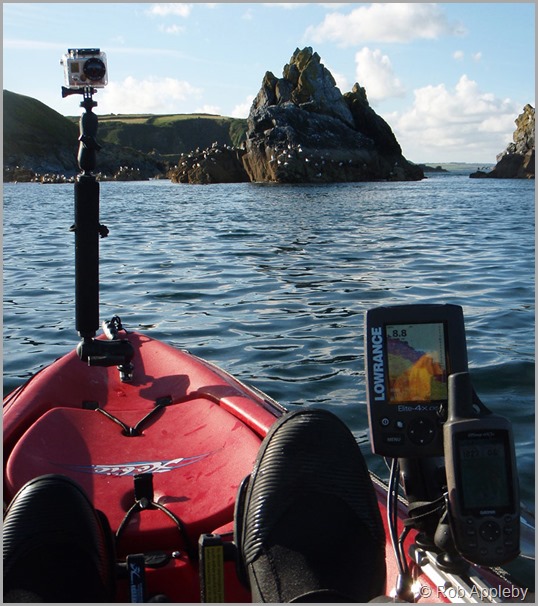 So the first session of the trip was over and I’d not blanked, bonus!. For my next session I’d made arrangements to meet two local kayak anglers (Sam & Ian) in order to show me how to find and tackle the big Pollack, I can’t wait!