The original plan for the summer break was to take my family on holiday to Curacao. For one reason and another I’m unable to join my family this year, so that leaves me home alone for quite some time. I could sit here and sulk, imagining my wife and kids running along sandy white beaches with a turquoise sea as a backdrop. The alternative to that is to create a ‘Plan B’.

I narrowed Plan B down down to two realistic options. The first was a kayak fishing tour around the UK, taking in several key locations over a three week period. It certainly has its appeal, though there’s the potential for an awful lot of driving as well as the weather playing havoc with well made plans. I wanted to reduce the amount of driving somewhat, whilst locating myself where the fishing is potentially good as well as varied. An important consideration was to be able to easily relocate should the weather cause a particular venue to be unfishable. I also wanted something challenging and interesting. This resulted in the creation of option two – read on.

I remember as a kid perusing the various angling books that resided on my father’s bookshelves (they’ve since relocated to my bookshelves!). Books written by famous sea anglers such as Des Brennan, Clive Gammon and Hugh Stoker, to name but a few. I vividly remember reading these books as a kid, thumbing through the yellowed musty pages and staring at the black and white photographs in awe. At the time I didn’t appreciate the influence that these anglers had on me, however, almost forty years later I’m still out there fishing. 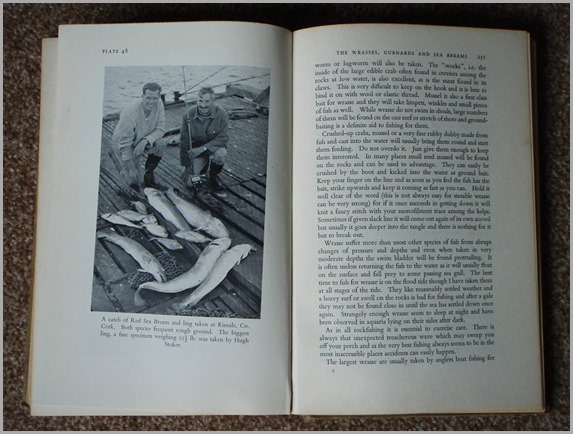 I’ve added to this collection of books over the years and amongst the pile is a set of sea angling guide books written by Hugh Stoker. These are an enjoyable read in themselves, particularly ‘Sea Angling Hotspots’. Some of the descriptions on particular locating marks are, by todays standards, quite amusing. Of course there was no GPS back in the 60’s, navigation was by compass and chart. Some of the descriptions to find a particular mark are worded along the lines of ‘head 1¼ SE of the harbour, line up a particular headland with the centre of the adjacent beach. Head south dragging a greased lead, once it picks up sand drop anchor’. I do find this amazing and amusing at the same time, great stuff!. The ability to locate rough ground, even a particular underwater pinnacle, with simple navigation techniques is quite inspiring.

The additional sea angling guides that the late Hugh Stoker produced covered many areas along the southern coast of the UK, from Kent to Cornwall. The area of particular interest to me is the southwest of the UK, this includes Somerset, Devon and Cornwall. His guides cover both North and South coasts, providing numerous shore and boat fishing marks. As a kayak angler it’s the latter that’s of interest to me and this is basically what has resulted in ‘option 2’ of Plan B. 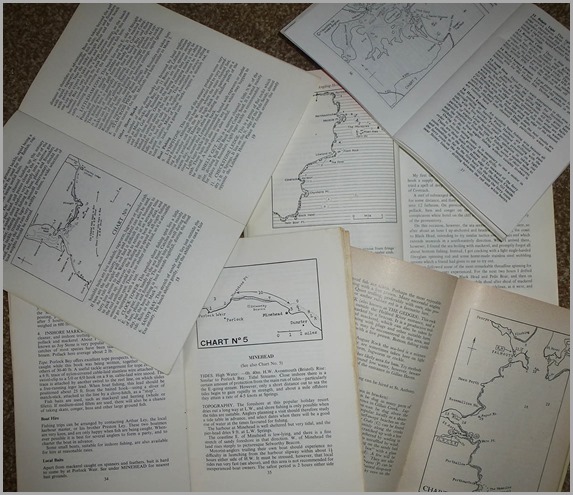 The southwest of the UK offers a huge variety of venues and species, plus being a peninsula it also offers the opportunity to shelter from the wind, though this may require relocation from time to time in order to achieve this. I’ve spent many hours, on and off, over the past couple of years transferring his marks to my GPS charts. Some have been straightforward, some required the use of the charts whilst reading his directions. The result of this is a large collection of marks that are available for me to visit (a small sample is shown below).

Fish stocks have been decimated over the years and I’m under no illusion as to whether or not these marks will produce the fishing that they did in the 60’s. I’m quite sure that some of the marks will still produce fish, though I expect that many of the marks will produce different species compared to what was caught when the guides were written. For me it’s an adventure, following in the footsteps of a great angler. It’s pure nostalgia, following the routes and fishing the marks in a similar fashion as they were over fifty years ago!. Obviously I wont’ get to fish them all, though I hope to fish a good selection of them over a three week period.

I’ll be camping my way around Somerset, Devon and Cornwall, at times roughing it, though I’ll probably utilise recognised camping sites as a hot shower after a long day on the water is always appreciated!. This fishing will consist of a fairly even mixture of lure and bait fishing. I’ve recently purchased a new vertical jigging rod and will be combining that with lighter spinning rods and a couple of boat rods. As for species, well where do you start?, the list is potentially long!. I’ll hopefully tick a good few off the list over the three week period.

Rob
Forget Somerset and Devon. Head straight to the North Inn at Pendeen north Cornwall. Landlord is a star, has a field at the back which he will let you stay in. Cheap as chips, has all the facilities, great scran and late lock in's. On top of that, there are some great venues nearby and dead easy to get just about anywhere in no time across the county.
Andy