It was a short notice trip, the weather was good, the forecast for the rest of the day even better!. The plan?, hit the water for 3-4 hours and catch a load of mackerel for the freezer. The chosen location was almost on my doorstep, a five minute drive and I was parked up in the centre of Stokes Bay. I travelled light, a spinning rod plus a 6lb class boat rod. The spinning rod was to be used for trolling a diving lure, the other rod was rigged with a string of feathers.

I was rigged up in no time and was soon pushing the kayak into the water. Another kayak angler launched just ahead of me, he reckoned that he’d be quite happy to catch anything. I can certainly relate to that, all fishing is good, though it’s always satisfying to catch a biggie from time to time!.

I peddled out a couple of hundred metres and began to drift with the tide, working a set of feathers towards the seabed and back to the surface, trying to locate the mackerel. There was very little activity, none in fact, so I began to troll a lure 30-40 metres behind the kayak with the string of feathers being deployed on the other side of the yak. It’s nice being able to have the rods right next to you, yet still be underway, no paddle getting in the way. I headed around Gilkicker Point and down along Haslar sea wall. I tried close into the rocks, out into deeper water, absolutely nothing!.

I looked over towards Spitbank Fort and thought that it may prove more fruitful. A quick check on the GPS put it 1.4 miles away, so I changed direction and made for the Fort. 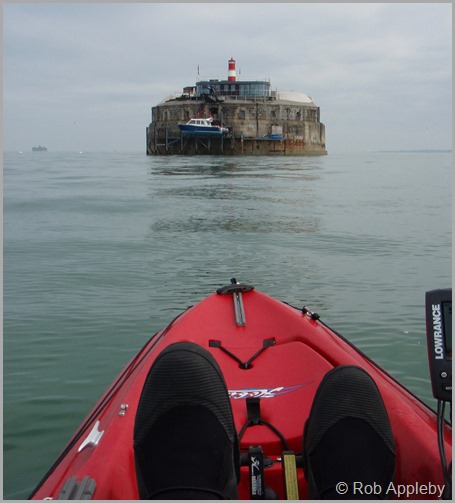 It was a little deeper than expected at around 6m, though there was still a couple of hours before high water so it’ll probably hit a maximum of 7m or more. I peddled around and checked out the features, nothing too exciting, though there were some sizeable chunks of debris randomly scattered around the sea floor. I’m guessing that these were leftovers from its construction. 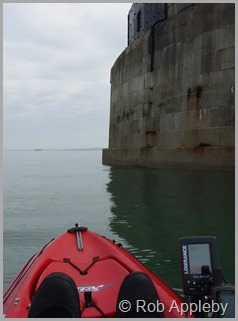 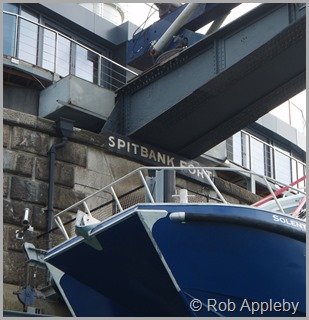 Around the down-tide side there was some weed gathering, it was in this area that the feathers were hit on a couple of occasions. There was nothing to show for it, though I’m guessing that the culprits were small Pollack. After twenty minutes of feathering around the Fort I had still failed to bag anything, so I decided to head back across the shipping lane towards Haslar. 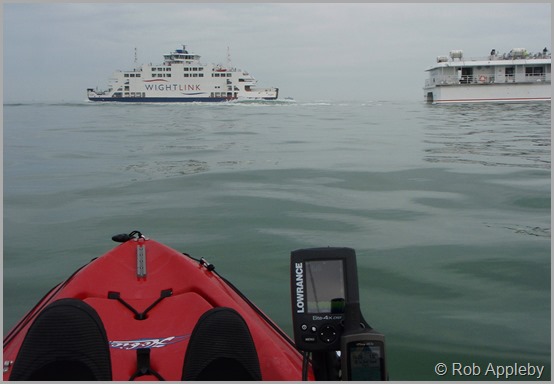 I saw a ball of fish about one metre across head under the kayak as I crossed the lane. It turned out to be the only shoal of fish I was to see during the whole trip. I continued to troll and feather as I worked my way back towards Gilkicker Point.

I fitted a Lowrance Elite 4 DSI when I rigged the Outback for fishing and it’s performing extremely well. The detail is excellent and it picks up returns with superb clarity. Below is a photo showing a string of feathers being worked close the the bottom. At times all four feathers and the lead were clearly visible. 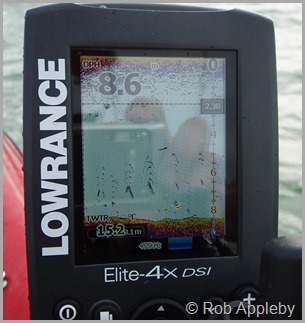 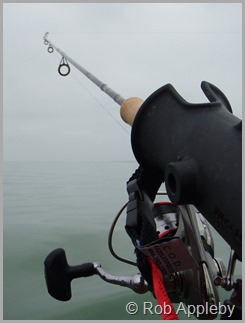 The forecast had predicted winds between 2-3mph, lasting overnight. This initially proved correct, though as the afternoon progressed a fresh westerly wind began to build, putting a steep chop onto the water. The feathers were hit a couple of times on the way back, though I failed to hook up. 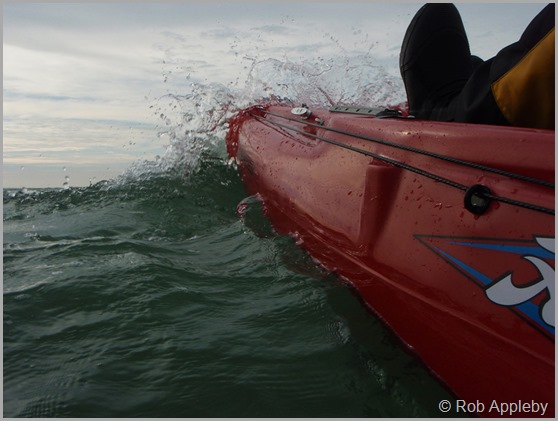 I the last couple of hundred metres before I recovered to the slipway I finally hooked into a mackerel, one lonely mackerel!. I chatted to the chap who was still anchored up off the slipway. He was fishing two sets of feathers, one on the bottom, the other close to the top. He had managed two mackerel in four hours, talk about hard going!.

I clocked up seven miles in three hours of drifting and trolling, ok, so it was a pleasant afternoon on the water though the lack of fish was definitely frustrating!

That sounds like one hell of an adventure, good luck!