My first fishing trip took place sometime in November last year. It was the first time I'd actually paddled out with all my kit fitted so it was really an exercise it finding my way around the yak.

I spent quite some time deploying and recovering the anchor, from the bow and the stern. All went without a hitch, again hours of reading various articles paid off handsomely. I'd been somewhat keen the day I'd launched as the weather was far from ideal.. though I was keen, probably too keen!. I soon spotted some fellow yakkers and paddled out in their direction, the sea state worsened as I paddled closer. I should have turned back, but I didn't.


Dropping anchor I found myself in a 2-3' swell not feeling to comfortable. The decision was made to up anchor and recover to the shore, however during this time my anchor had dragged due to being incorrectly locked down and I ended up about a mile downwind & down tide of my launch area. About 45 minutes later, with a sweat on, I made it back to shore wandering what I'd got myself into!!... 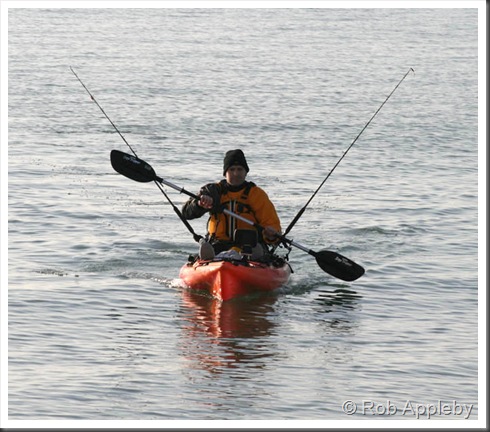 However, after relaxing in a bath and reflecting on the outing I realised that despite my over eagerness I was onto something good with this yakfishing lark.


My next trip could not come soon enough, though I was going to wait for a flat calm day to repair my bruised ego!... oh, and I needed a longer paddle as the current item kept clattering on the sides.
Email ThisBlogThis!Share to TwitterShare to FacebookShare to Pinterest