When I originally kitted out my Big Game I wanted the largest fishfinder display, within reason!, that I could find.. mainly because it was going to be situated past my feet and I wanted it to be clearly readable.

I also wanted the combined GPS unit but the cost with maps was prohibitive, plus I wasn't happy about losing both facilities if the unit/battery should fail.

So I settled on the Humminbird 565 which has turned out to be a good choice and I relied on an aging Garmin Etrex to provided a limited GPS service (no maps). I'd been researching GPS units for some time and I've finally taken the plunge by purchasing a Garmin 60CSx. I didn't want something dedicated to the yak, it had to be good for hiking, cycling, etc. 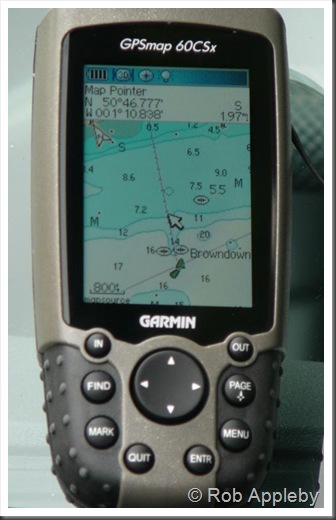 Various reasons why I chose this unit, but to summarise:

There are stacks of other functions, such as 'drag anchor' alarm ,etc.As for maps the unit ideally requires the Garmin BlueChart maps which can be purchased on CDROM for PC use, though unlocking codes are required to unlock individual maps for GPS use.

Now this isn't cheap!, the Atlantic CD literally has hundreds of charts, the Solent chart unlock cost around £100. Though..... if you know where to look you can get them, for nothing. The above photo shows the scale set to 800ft, though you can zoom down to 120ft and more.The charts are extremely detailed both on the PC and handheld GPS, they are in fact the same on either unit. The detail is simply awesome and I'll be trying it out for the first time tomorrow. 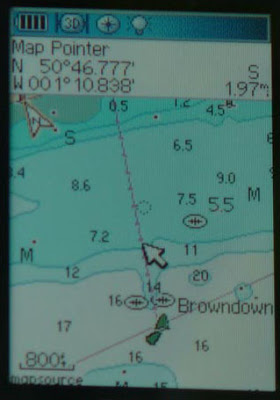 Mounting was carried out using a Garmin marine mount to suit the 60 series. 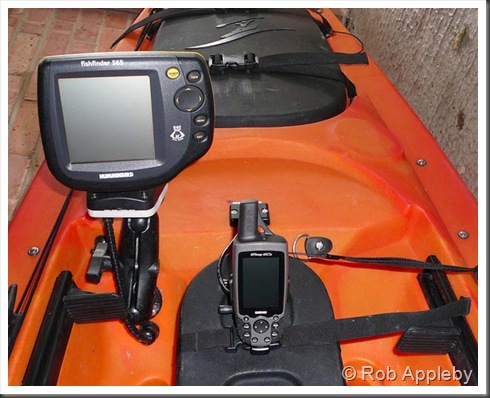 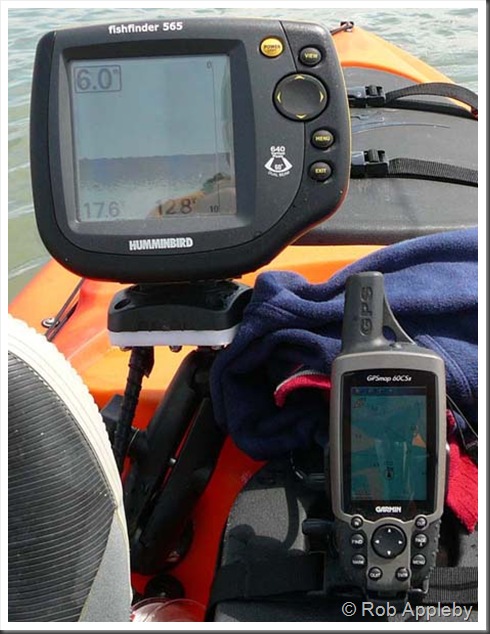 From experience with the Etrex I know the batteries don't last a fantastic time when the unit remains on, especially in cold weather. Hence I took the opportunity to fit a DC power lead and it's wired into my main wiring loom fed by the 12ah battery. If the DC battery feed is interrupted it reverts to internal battery supply with only a cautionary warning.

Comparing to my Etrex, the satellite sensitivity is excellent,.. I can sit indoors and get a sat lock. Time will tell, but initial impressions are very encouraging.

Below is a screen shot of the BlueChart mapsource as viewed on the PC showing the details available, though it's shown somewhat zoomed out here. The PC also allows charts to be printed out, laminated and stored on the yak for quick reference if required. 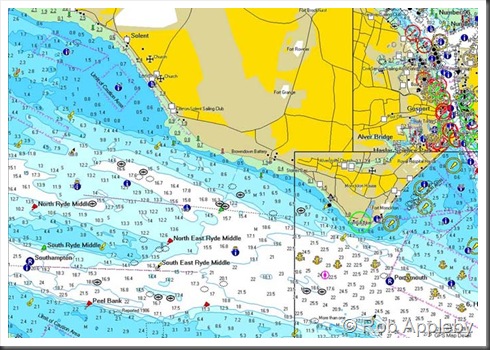 The 60CSx comes with an internal memory card, 64MB I believe, though I've upgraded to 4GB which if I chose would allow me to fit all charts for Atlantic, Pacific and Americas in one go... with loads of room to spare!

I still carry my old Etrex and handheld compass for backup of course.

Having used this unit for several weeks now I'm tremendously impressed with. Not only is is handy for marking fishing spots, monitoring drift at anchor, etc.. the map detail is simply superb and accurate. The electronic compass only works in the horizontal position which is a pity, though if required for that purpose it's quickly removed from its mount. Operation when on the yak is easy enough, switching between screens, selecting waypoints, etc. I've navigated in extremely thick fog, using the GPS to recover to my launch site, worked a treat!.

Hi, my son and i just bought our first SOT (the Malibu 2XL) for fishing around Argyll coast. Your site is really good! Youve got a lot of advice and tips that are very handy. Thanks
Richard and Sam

Hi rob, congratulations for your site! I have a question about this Gps... maybe you can help me: If you have different types of maps loaded in this gps, land topographics maps on one side, blue chart, or other digitalized maps, when you start the gps, does it let you choose the base maps you want as background?, or you don´t have the option of having different digital cartography loaded in the device?.

Hi
you can have multiple maps loaded onto the GPS memory card, I normally have Bluechart, Topo and Navigator charts loaded at any one time. You can of course only view one set at a time. However, there is no simple menu option of switching between map sets.

I'll try to explain how it's done, though without my GPS to hand (I'm in Norway at the moment) it's a little tricky!. Basically you need to be viewing the map screen, then hit the MENU button. From memory you then need to select the SETUP MAP option and select ENTER. Using the left and right ARROW keys you can select about five different options along the top of the screen, some of these are quite handy if you haven't seen them before!. On one option you will see a list of options, i.e Hide Bluechart, Show Bluechart, Hide Topo, Show Topo (if you see the screen with 'tick' options next to the maps that's NOT it, you may need to hit MENU again). The simplest method is to select HIDE ALL then select ENTER. Go back into that menu option and then select SHOW the map you actually want and select enter. That should be it.

With a little practice you'll find switching maps to be quite straightforward. If you're using your GPS on a kayak going into the main menu screen and select the compass option. Change the compass/GPS orintation switching speed to 1mph/kph as this will allow the map screen to orientate quickly when you start to paddle. The elctronic compass is only effective with the unit horizontal yet on a kayak we normally have it mounted in a stand mounted at around 45 degrees or so. The default setting is around 10mph before it switches to GPS direction, a speed you're unlikely to attain on your kayak!. Hence it's trying to get direction from your angled GPS unit and it simply doesn't work.

If you're still having trouble navigating maps contact me again towards the end of March and I'll give you a definitive answer as I'll have the GPS to hand then.

Thank you very much for your explanation that will help me to know the capabilities of this gps. I'm actually working with the very simple E-trex in my kayak and Ozi explorer at home with the digitalized marine chart of my area in the northwestern Spain. As I was looking to upgrade to a garmin 60's series this will be useful information to take the decission.

Enjoy Norway! Maybe are you trying to catch some cods under the aurora? Ja ja, good luck!