The consistently poor weather this month has kept me grounded which is highly frustrating, however a weather window of around 12 hours appeared at short notice. The alarm clock was set with an anticipated wake up at 6am, however, several presses of the 'snooze' button saw me crawl out nearer 7am !


Frost hadn't been forecast though my car was fairly well frosted over, fortunately there was no wind so it didn't feel particularly cold. My gear was rapidly packed, a flask of hot coffee thrown in and I was on my way. 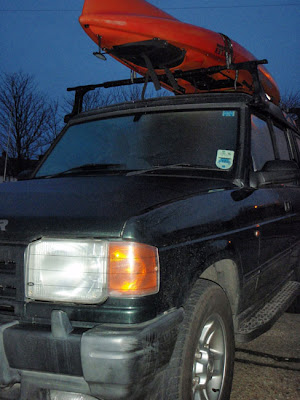 I had no intention of travelling too far so my choices were rather limited. Either paddle out into the Solent to be plagued by small pouting and whiting, or fish the structure around the creek in the hope of a decent bass or two. I chose the latter as I've seen more than enough pout these past few months !


Rigging didn't take long and I was soon ready to launch. I took the opportunity to try and my newly purchased PFD, a Palm Kaikoura, which certainly looks the business - review to follow. I've also recently purchased a handheld VHF in the form of an ICOM M-33. I'm not taking the VHF course until later in March though it'll be coming along from now on for the obvious safety reasons as well as eaves dropping into other boat chatter. Again, I'll review this piece of kit in due course. 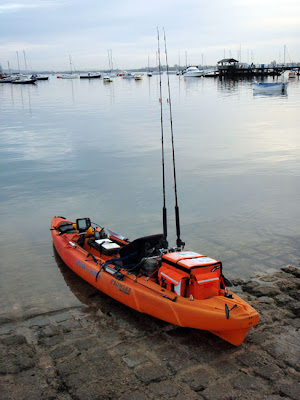 The paddle to my chosen mark was a short one, fishing some heavy structure where anchoring is a challenge. I wasn't messing about, half fillets of mackerel were threaded onto 6/0 Kamasan hooks and dropped over the side. This method has served me well last year, though my hopes weren't too high as the fishing around these parts is generally poor until early March and beyond.


Despite being chilly the morning sun was quite warming, however, it was soon was obscured by some light cloud. The fishing was extremely slow, though the migrating geese and regular radio chatter passed the time. 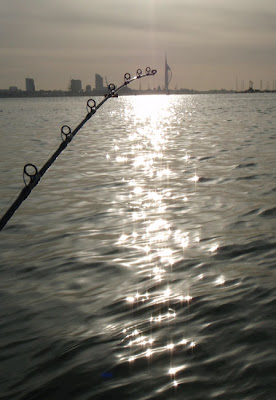 The breeze picked up and with the sun behind the clouds the temperature dropped off. Cooling hands found refuge in the 'hand warmer' pockets of the Palm Kaikoura. I also purchased some waterproof, fleece lined ski gloves which proved to be superb. Not only great for keeping your hands warm, but perfect for paddling as well.
Unfortunately my first trip of the year failed to produce a bite never mind a fish, but at least I was out fishing again. Things can only improve!
Please feel free to comment.
Email ThisBlogThis!Share to TwitterShare to FacebookShare to Pinterest