I’ve recently returned from Norway and was quite eager to get out on the water. I’d wanted to fish a new venue during daylight hours, though a longer then expected day at work forced me into an evening session. I decided to play it safe and fish the Bristol Channel near Watchet. I arrived early and once rigged it was clear that I was going to have to wait an hour or so before I was able to launch. Surprisingly the beach was covered in several inches of soft mud, far more than usual. I put this down to the calm weather over the previous few days that’s allowed the sediment to settle. Unfortunately it added an extra wait as I didn’t fancy wading through it to reach the water.

Whilst removing the wheels from the C-Tug trolley I managed to slice one of my fingers which resulted in a steady flow of blood. Fortunately my first aid kit it well stocked so a couple of plasters soon had me fit to fish!. The sun was close to setting as I paddled east towards Watchet and twenty minutes later I was anchored up up in ten metres of water.

Earlier in the week I’d replaced the composite RAM balls that support my RAM rod holders with metals ones. I’d replaced the corroded metal ones before Christmas though one of the replacement composite items snapped on the first trip out. I painted some Waxoyl onto these new RAM balls so hopefully they’ll remain in good condition for several years.

I’ve previously had my anchor light mounted at the rear of the kayak, it’s been there for the best part of five years. There have been times when the weather has deteriorated to a point where I’ve wanted to take the light down when recovering to the beach, though due to its position that’s not been an option. With it being hard mounted to the hull an untimely capsize in shallow water could cause considerable damage to the hull, unlikely as I tend to choose my weather windows carefully, though I have been caught out on a number of occasions. I had a spare base mount for my light so I decided to mount it to the kayak, positioning it just behind me, wiring into the kayak electrics as per the rear mount. It’s easily removed in that position whilst afloat an can be stored within the kayak via the centre hatch. Another advantage is the amount of additional light I get in the cockpit area, plus is illuminates the rod tips extremely well. The rear electrical socket it still fully functional and can be used to power my live well should I ever get around to using it! 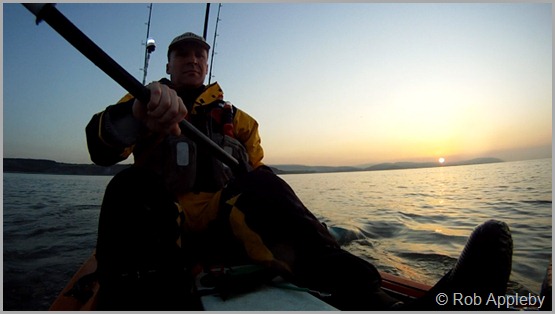 Anyway, back to the fishing. The first hour was extremely slow, in fact I don’t think I registered a single bite!. The fish did eventually show and the first fish to come to the kayak was a nice sized Thornback Ray. It gave a great account of itself, not hanging in the tide as they often do, but making several runs to a point where I expected a conger eel to surface. It was the first of five rays, the remainder were somewhat smaller, though they provided steady sport. 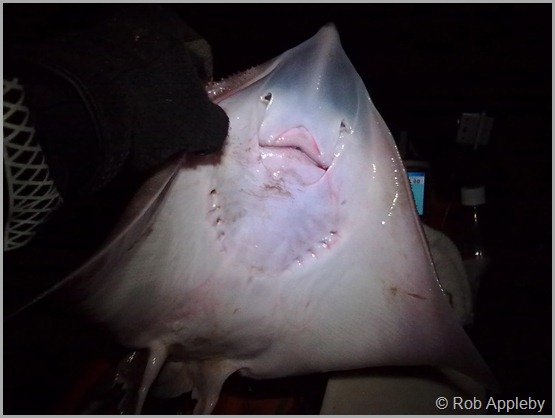 I’d left my camera at home so had to make do with my mobile phone. Far from ideal but better than nothing I guess. The Dogfish were out in force and proved to be quite a nuisance, on more than one occasion they were coming up two at a time!. 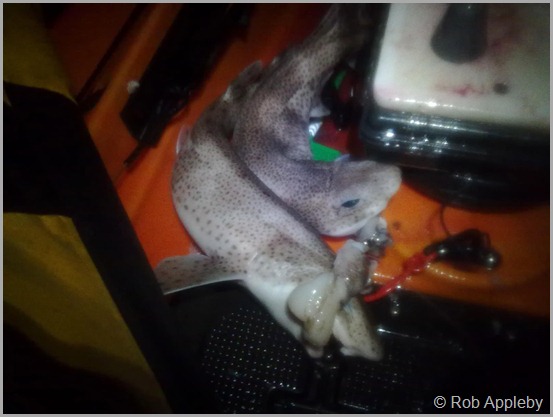 Once the fish started to bite the action was pretty much none stop. I hooked into something that yet again was being quite aggressive and had a real conger feel to it, needless to say I was quite surprised when a decent sized Cod just under 6lb came to the surface. 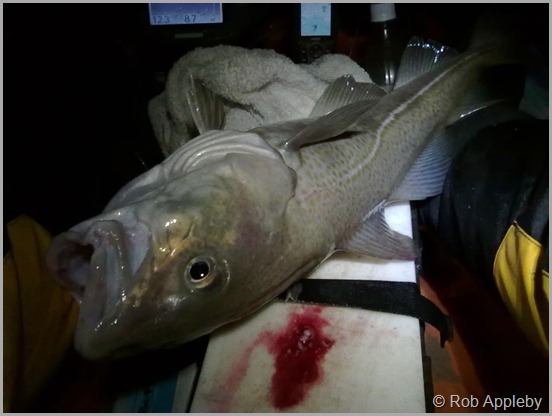 The Conger eels finally made a show, though they were all small, the largest at around 10lb. I managed four before slack water totally killed off the fishing. I fished on for another hour or two until the ebb tide picked up a little.

I have to say the weather was superb, the being sea glass calm for most of the evening, with the occasional sea breeze causing the surface to ripple over from time to time. The paddle back was very leisurely, I was just enjoying being out there on the water again.

Once back on the slipway I washed the blood and guts off the kayak and decided to fillet the cod before I headed home. One fillets I noticed several red thread worms, not that unusual in Cod. Though it was the dozens of brown circles in the other fillet that raised an eyebrow. I don’t recall seeing these before, though after a little research it appears they’re a fairly common parasite called ‘Cod Worms’. On one fillet there were probably 50-60 of these coiled worms, on the other fillet there were perhaps 10, the coils being up to 1/4” in diameter. I decided to cast the fillets back to Neptune, quite disappointing.

Still, all things considered it was a quite productive session and an enjoyable one at that!