A trial fish – testing the setup

The Hobie Outback isn’t full rigged yet, I’m still awaiting for some gear from YakAttack to arrive along with a Combo FF/GPS unit from Lowrance. However, it was quite capable of fishing and not only was I itching to get afloat, the weather was also perfect!.

The plan was to fish Wednesday afternoon into the evening before sleeping in the car overnight and heading out very early for a morning session. I double checked the tides the day before and looking back I can clearly remember ticking the box to add an hour for BST!. I have no idea why I did it, though it explained why the tide was far higher than I expected when I arrived at the Blue Anchor in north Somerset. Ah well, I never said I was perfect!

Once I’d realised my mistake I was rigged up in double quick time and heading down the slipway, eager to launch. So eager in fact that I forgot to take photos of the newly rigged kayak. With the kayak off the trolley I was thinking to myself, ‘a short paddle to deeper water and I’ll drop in the Mirage Drive’. Looking at the kayak there was no paddle… it was still in the back of the car!. I’d worked up a little sweat after jogging to the car and back again, better than being cold I guess!.

Despite these minor hiccups I was soon afloat and heading out to sea. The small swell that was present caused the bow of the Outback to dig in a little, the concave hatch cover funnelling water into the foot well area. This was a little unexpected, not what I was used to, though the large Mirage Drive mounting hole disposed of the water in the blink of an eye.

After a brief chat to a fellow kayak angler a few hundred yards offshore I headed out to deeper water. As mentioned this was the first time I’d taken the Hobie afloat armed with fishing gear so it was very much an opportunity to find out what worked and what didn’t. The anchor was soon deployed, and with the trolley locked of I was ready to fish. A couple of folk had questioned the fitting of the anchor connection point (stainless ring) on the upper trolley line. Normally this would be placed on the lower line, though I was forced to place it in the upper line to get the anchor setup I wanted. As can be seen in the above photo it works just fine. 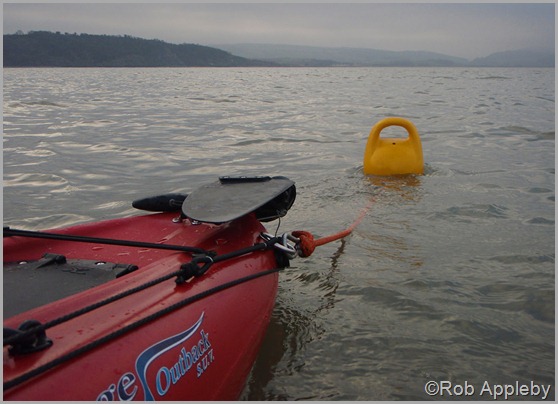 Baits for the day were a fillet of mackerel on one rod and a large whole unwashed squid on the other, both mounted onto running ledger 6/0 Pennel rigs with a short wire trace. Where to store my frozen bait was a slight issue. I managed to fit a small cooler bag into the centre 8” hatch though I didn’t consider ideal, I preferred having the small marine box behind me that I’ve used for the past few years, something that I’ll probably revert to. 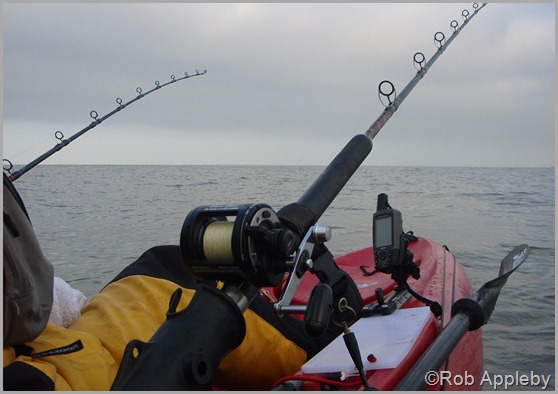 In the above photograph you can see a small chopping board fitted next to the paddle. It’s something that I made last week and it can be fitted and removed in seconds, I’ll cover how it’s made and mounted in a later article. It was the first time that I’ve pedalled this kayak with the Turbo Fin upgrade and it really does make a big difference. As much as the Mirage Drive is very effective, it does deny you a centre console. Previously I’d used the centre console on the Big Game to position my bait box/cutting board. I trialled another setup which didn’t really work for me so I’ll try something else on my next outing. Trial and error, I’ll get there in the end.

The foot wells hold a little water, though nothing that’s going to make the fishing experience uncomfortable. The seating position is high and dry so you’re always sitting well clear of the water. The seat base has a slight tendency to slip back if you shuffle backwards, though this is easily pulled forward as required. 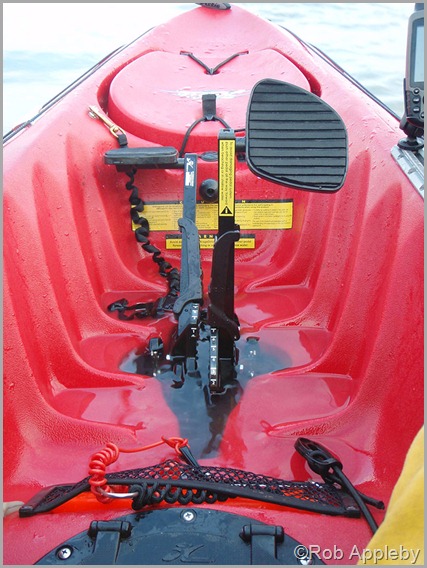 In the above photograph you can see a T-Bar and a set of lip grips on a leash. I also had a set of pliers and scissors mounted on the left hand side in one of the moulded trays. It’s just a case of fitting accessories here and there and see how the setup works. I reckon it’ll take 3-4 trips to get the kayak setup exactly how I want it.

The first half hour was slow, though a tip eventually nodded over and I was hooked into a lively Conger Eel. It turned out to be quite small, though in the flooding tide it gave a decent enough account of itself. The sport continued and I managed a total of six eels before the water slackened, indicating high water was approaching fast. 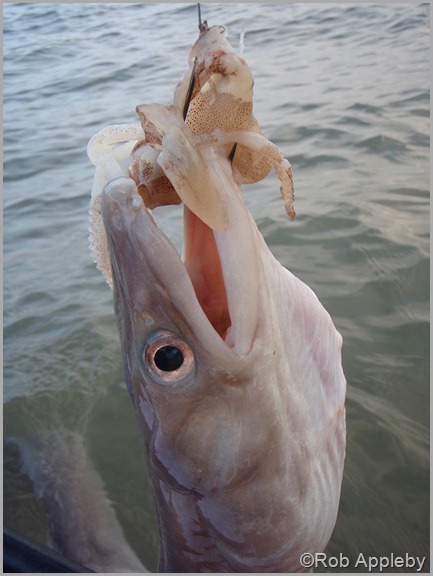 The photograph above was of the first eel, taken before the light started to fade fast. It was only a few pounds, though they increased in size, the best fish being around 17lb. At times it can be unclear as to what size eel you’re hooked up to. Some eels come up quite easily and don’t decide to fight to higher in the water, though the majority tend to be lively from the word go. The target species had been Cod, though I was lacking Lugworm so my chances were greatly reduced in my eyes. However, catching conger for a few hours provides some great entertainment! 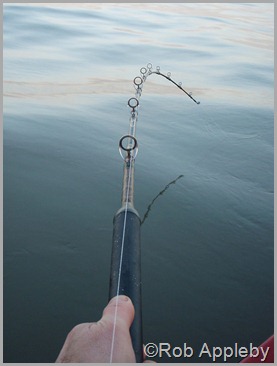 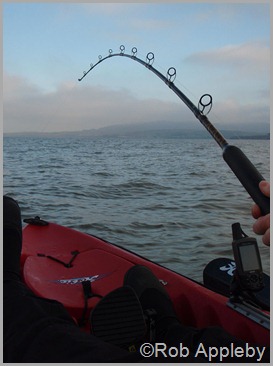 As the tide slackened the Conger disappeared and smaller fish started hitting the baits. Thankfully the Dogfish weren’t there in great numbers with only a couple of small fish coming to the kayak. 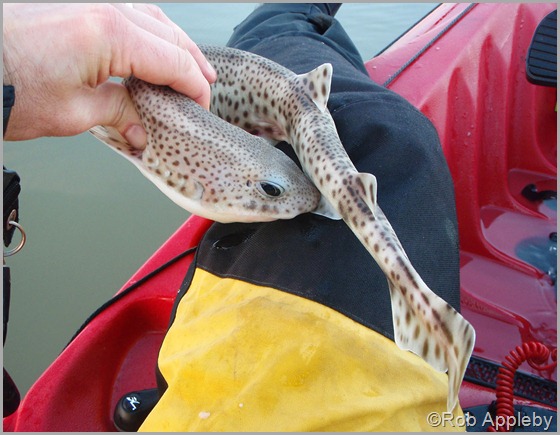 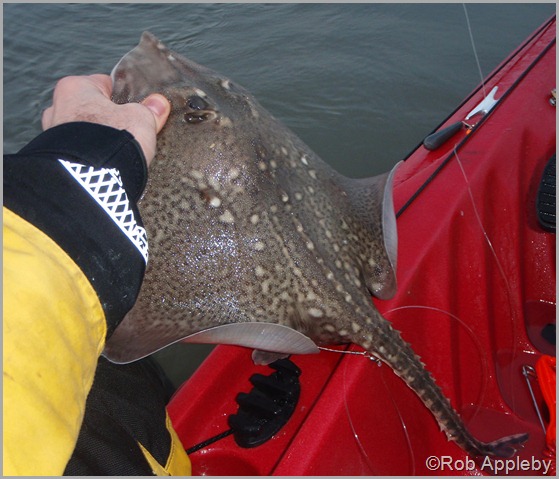 As the tide turned onto the ebb the fishing picked up once more. I hooked into a couple more Conger eels and I managed to bag two small Thornback rays. No big fish, though it was steady sport and it’s always better than blanking!. That said, the weather was excellent for this time of year and it was quite simply a pleasure being out there. 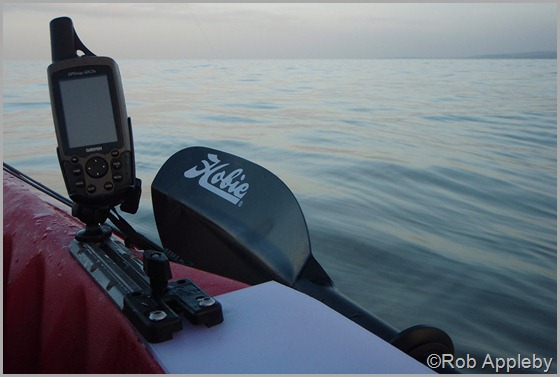 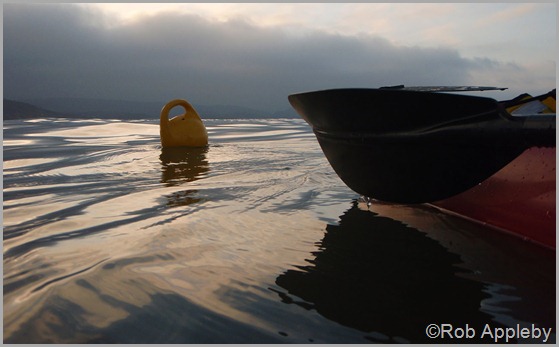 For a first trial fish on the Hobie Outback it went pretty well. There’s a few things that I wasn’t happy with and that I need to change. I’d inserted a large collapsible ground bait bowl into the centre 8” hatch for storage purposes. However, the bag tended to collapse and move about making it far from ideal. I’ve plans to place a fixed storage back in that position, though it needs to be large and will need a little thought. I used the Hobie livewell for dry storage, though it wasn’t high enough to permit larger items such as a flask to be placed in there. I made my own dry box some time ago and it’s far better suited to the job. I need to look at where I’m going to store frozen bait, again, a little thought will be needed to come up with a suitable solution.

I’ve still got to wire up the kayak and provide connection points for a FF/GPS and navigation lights. Hopefully this will all be completed by the end of this month and I’ll be fully up and running once more. 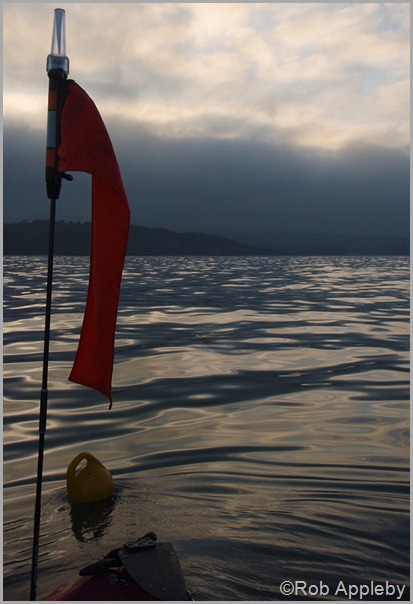 Having a kip in the car before you set off, that's dedication for ya ;-)
Wouldn't mind one of those congers, In fact I'd be happy with one of them.
Nice report Rob ;-)

Great read Rob, I guess the water's cold there as it is January. What's you outfit and footwear?

Not so cold this year, not much bove freezing, often below. Drysuit is a Typhoon PS220 with Chota boots. Take a look through the 'clothing' category for more info.