My son has been asking for quite a long time for me to take him fishing. I can’t remember how old I was when I first went, five, perhaps six years old?. He’s turned six last month and has just returned from holiday. One of his first questions was when can we go fishing!. He already has a wetsuit and PFD and had joined me on the kayak for a play once before.

The weather was ok, though we launched a little later than I’d wanted due to the tide. It was a weekday evening and he couldn’t be too late for bed!. As expected he was massively enthusiastic and helped me pack the car, carrying each item individually, putting them in the boot in a haphazard manner. Once on scene he helped rig the kayak and we headed down to the slipway. With the kayak in the water he hopped into the tankwell of the Hobie Outback and made himself comfortable. I’d taken two rods rigged with mackerel feathers, one of them being a short Fladen ice fishing rod and reel for him.

I peddled out a few hundred yards, the kayak being extremely stable despite his 50lb weight moving about behind me. We were soon feathering away and disappointingly the mackerel weren’t there. After a drift on a few hundred yards I moved about in the hope of finding some fish. There was the odd small shoal showing on the fish finder from time to time, though I’m guessing they were sand eels due to the lack of takes. 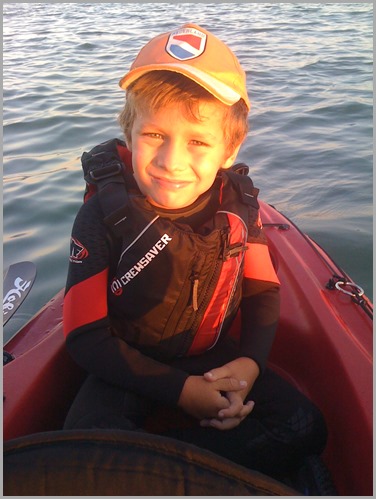 As kids do, my son soon became bored as the huge bounty of mackerel that he’d expected had failed to materialise. I looked around a couple of times to find him staring at the water/kayak. I kept telling him to look around and enjoy the views, though he kept on looking down. A few moments later he gave me his rod and said he wasn’t feeling well… yup, he was seasick!. I have to give it to him, my boy can vomit with the best of them!. Once cleared out he started to fee better and the fishing resumed.

Gulls started to work the surface a couple of hundred yards away so we made a dash into the area and dropped out lines. There wasn’t a huge number of fish, though there was a handful hitting bait on the surface. I hooked up and passed the rod to my boy who proudly reeled in his first ever fish! 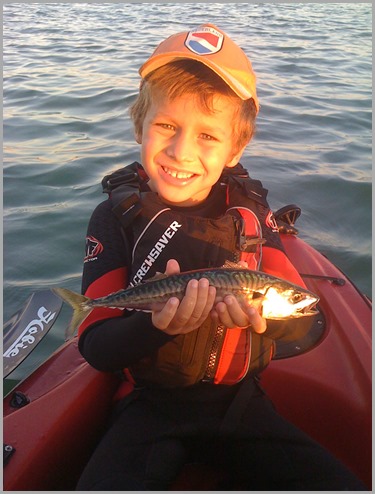 He was happy and sat there examining and prodding his catch all the way back to the slipway!. He was still feeling rather queasy and when asked if he wanted to kayak fish again the answer was a resounding NO!. I left it at that, though at 0700 the next morning he was jumping up and down and my bed asking when we could go again. I guess his bout of sea sickness had failed to dampen his enthusiasm. He left for school, all proud, clutching  a copy of the  above photograph… good times!