I took delivery of two of Scotty’s Gear Head Track Adapters from Escape Watersports quite some time ago. I'd not really used them in anger until last month, hence I’d not really provided myself with an opportunity to write a fair review until recently.

Personally I’m a big fan of RAM accessories, my main rod holders being a pair of RAM tubes fitted either side of the seat on both of my kayaks. However, I really wanted a pair of rod holders mounted up front, facing out to the side, for trolling purposes. These would be required to position the rods at right angles to the kayak, providing maximum tip separation whilst keeping them in full view at all times.

I’d already decided on a pair of Scotty rod holders for this application. They locked solid and when fitted with a set of Scotty Slip Discs provided infinite adjustment. I raised them up using a pair of Scotty Vertical Extenders (No.254) to prevent the rod butts from fouling my knees whilst using Hobie’s Mirage Drive. The real issue was how best to affix them to my Hobie Outback.

Ok, I could have used a Scotty flush mount base, but where to mount them?. I’d already fitted several sections of YakAttack’s GearTrac to the kayak, ideally I wanted to mount all my accessories to this very strong and versatile track system.

Step forward Scotty’s Gear Head Track Adapter… so what exactly is it?. Quite simply it’s a turret that’s designed to accept a Scotty accessory the same way as say a Scotty flush mount would. However, Scotty have incorporated YakAttack’s T-bolt into the adapter which permits it to fit to YakAttack’s GearTrac and Mighty Mounts. 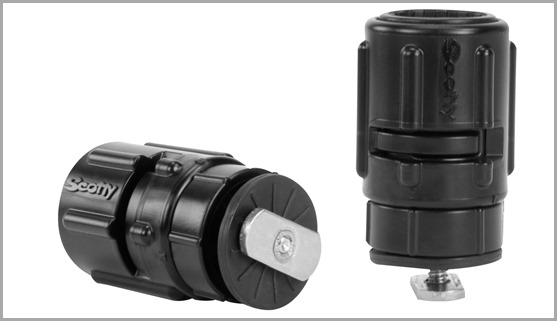 Fitting them to the track is a quick and simple affair. With the T-bolt partially unscrewed the adapter slides onto the track and is simply tightened down. The combination of the T-bolt and the rubber washer that forms part of the mount provides a very solid mount. 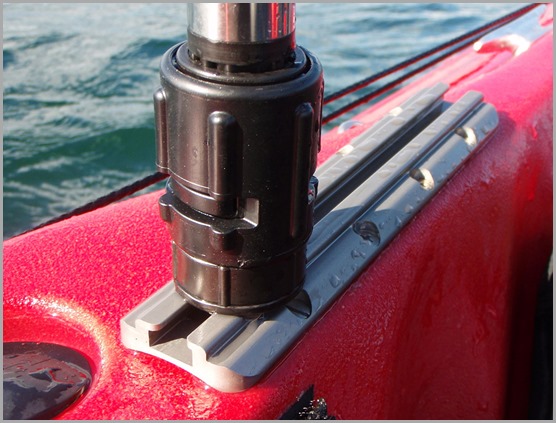 Accessories are attached to the adapter by twisting the unit and dropping a Scotty accessory into the mount, releasing it causes the accessory to be locked into the adapter. It’s really as simple as that. What is nice is that accessories can be removed and fitted as required whilst leaving the Adapter fitted to the GearTrac/Mighty Mount. 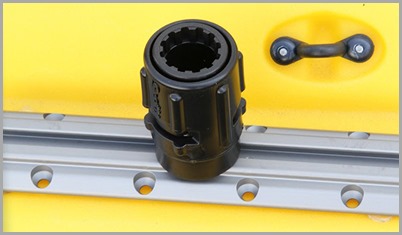 I recently enjoyed a few days fishing down in Cornwall where I had several opportunities to try out the Adapter as part of my trolling setup. I only took one rod holder setup afloat with me and kept it stored within the dry box until required. I kept the Scotty rod holder, vertical extender and Gear Head Track Adapter as one complete assembly. It was a simple case of removing the rod holder from the dry box and fitting it to the GearTrac as required. The operation was quick and simple, it taking only seconds to fit or remove. 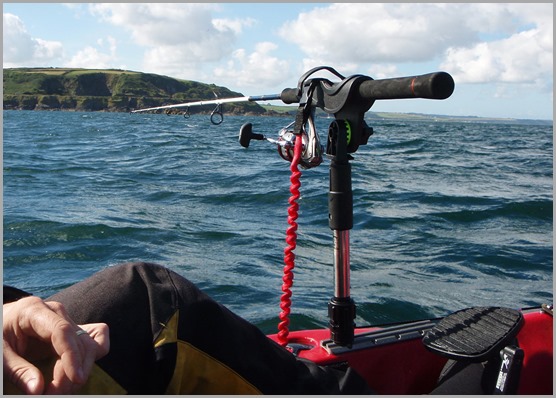 With the vertical extender and rod holder fitted the whole setup was extremely solid. I’d wanted a solid mount, capable of withstanding aggressive hits from fish, without the rod holder being pulled out of position. The combination of the Scotty rod holder, the vertical extender and the Gear Head adapter mounted onto a length of GearTrac, had provided the rock solid mount that I’d wanted.

The T-bolt was particularly tight within the Adapter, though I expect that this will slacken off a little with use. The Gear Head Track Adapter can be purchased from Escape Watersports for under £15 which is very reasonable.

With regards to rod holders, I’ll be taking delivery of a pair of Zooka Tube rod holders from YakAttack sometime soon. Once I’ve had a good play with them and used them in anger I’ll publish a full review – watch this space.