Recent reports from Tywyn in Wales had shown the area was producing some good numbers of Tope, a little hit and miss but there were definitely being caught. The opportunity to fish the big spring tides was sadly missed due to work commitments which resulted in a quickly arranged trip the following weekend.

It's just short of 300 miles from home to this venue, the last few miles through tediously winding roads, though the fantastic scenery made up for this. 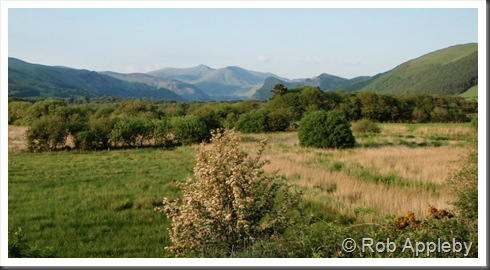 After a little research on the internet and Google Earth a small campsite right on the shoreline was chosen. Small with basic amenities it might have been, but what a cracking location. 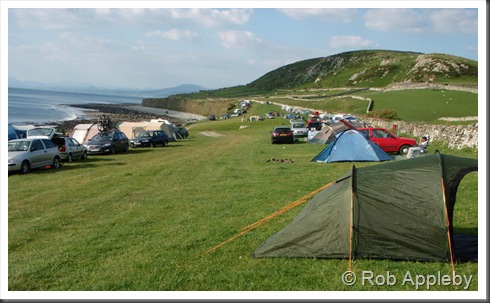 Arrived late afternoon and made camp, being a school half term weekend meant it was busy so the pitch wasn't ideal. Once sorted we drove around making a recce of the launch sites before settling down to a few drinks around the campfire whilst the sun went down, just perfect!! 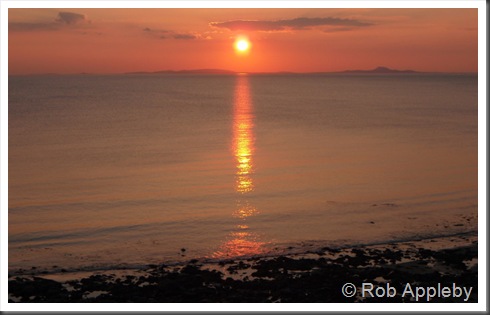 An early start was accompanied by a fried breakfast before sandwiches, etc, were made in preparation for the first days fishing. The launch site is a small river a few hundred yards short of the beach, the last stretch picking up into a shallow run, good fun. 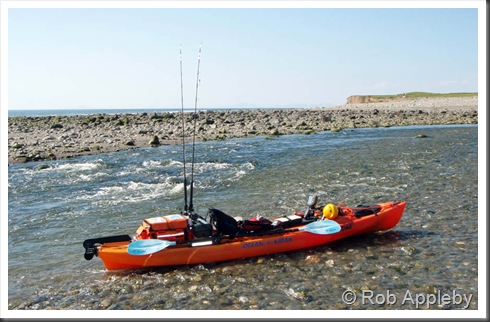 The surf was very light on the beach, the water clarity superb, it's just a lovely spot. We paddled out to a depression where we dropped Tope traces baited which mackerel. The skies were clear, the temperature warm, catching was going to be but a bonus!, this for me is what kayak fishing is all about. 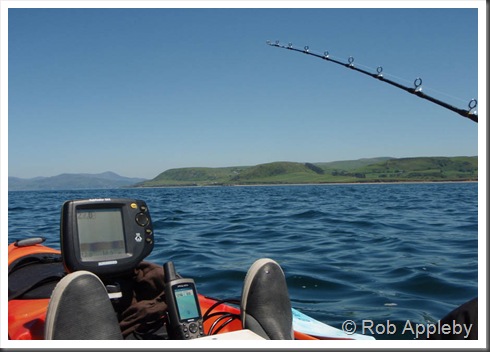 We didn't have the reef to ourselves, there were a few other yak fisherman out there making a good half dozen.

The fish were soon showing an a multitude of Bullhuss came to the yak. Most were of the 4-6lb bracket as can be seen below, though a few made double figures. The are quite a strong fish and seem to have a habit of trying to bite you, making getting a photo rather difficult. The latter 'type' left the yak before they could be captured by the lens! 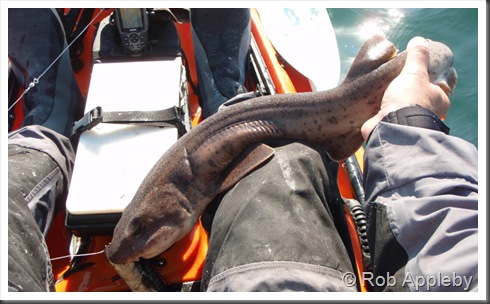 There's a multitude of jellyfish over the reef, some extremely large. The photo below shows a nice specimen, the water clarity allowing a decent photo to be taken, this one was a good 3-4m deep. 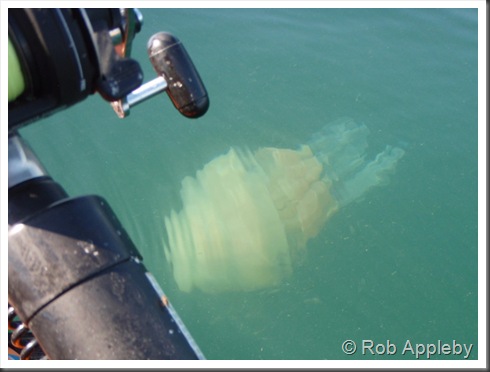 Paddling back in later that evening saw be literally paddling through a soup of jellyfish right on the surface, not something you encounter everyday!
I steady weight on one retrieve indicated weed, however, it turned out to be a good sized spider crab. Happily it was my only encounter with one over the two day trip. 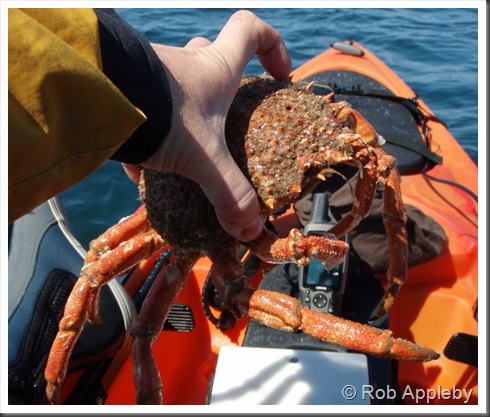 The Tope failed to show at all, not even a single run. It was the same for the other anglers on the water whether in boat or yak. The packs of Tope just weren't about, frustrating, but that's fishing.
A string of baited feather produced a steady run of Bream, nothing sizeable though I'd heard they can run to 3lb on the reef. I was hoping for a few keepers for dinner though none of them made much more than a pound. 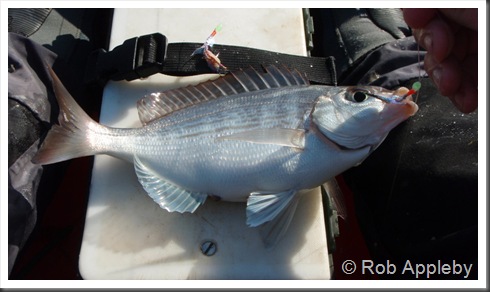 We launched around 9am and returned to shore just before 7pm, a long session, probably my longest time afloat. Again, there was little surf to speak of on the beach. 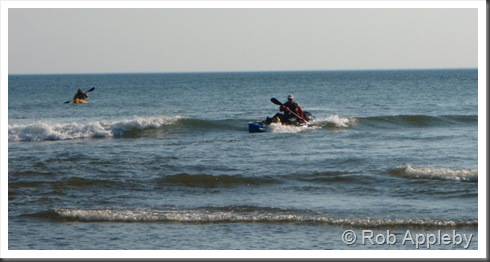 What we hadn't considered was the short trek back up the river to a point where we could paddle back to the launch site. If I was exhausted after the time afloat I certainly was after dragging the yak upstream!. 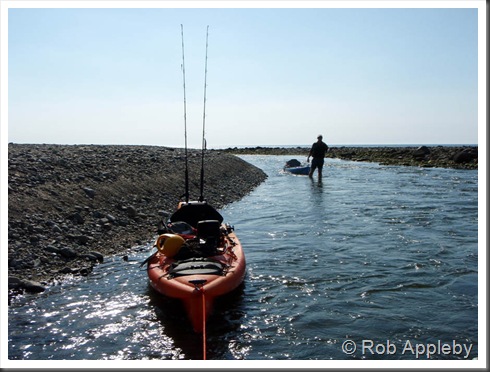 Returning to camp we chilled out whilst sorting out our gear for the following day. The campsite allowed a campfire per pitch which was a pleasant change in this 'health and safety' conscious world. 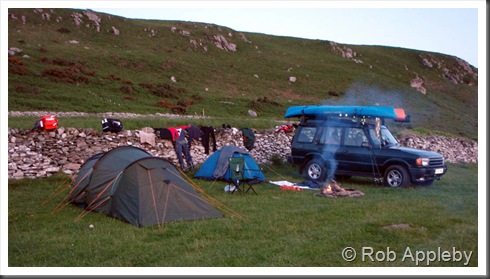 As the sun dropped down we chilled out with a few drinks hoping that the following day would bring us better fortune.. 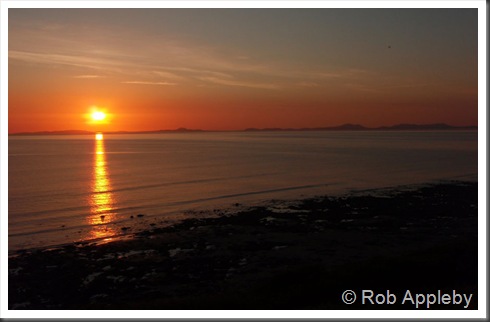 Another morning and another fried breakfast to get us going. Paddling down the river revealed a slightly different beach. The surf had risen to about 3' at times, something new to me. There are some good article on the net about tackling surf, something I've read up on in the past.
Despite hitting a couple of nice breakers on the way out it proved to be a doddle, however, I still had to come back in later that day.

The fishing was far quieter on the second day, with only a couple of nice Bullhuss and a couple of strings of mackerel. Despite starting off quite breezy is soon settled down into yet another cracking day. I can honestly say that you don't need to be catching when the days are as good as this. 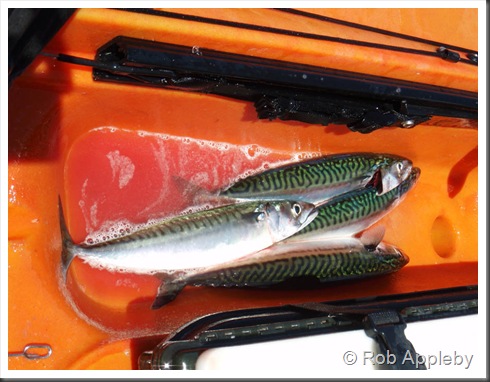 I think we were still recovering from the day before, plus I don't think the late night and wine helped much either!. We called it a day after only six hours on the water.

The surf was still up, there was a yakker outside the surf zone contemplating re-entry. A couple of guys were playing in the surf on Ocean Frenzies, clearly getting flipped over onto their noses.. great!.


No point in messing about so my gear was stowed and I paddled in. The first wave picked me up and I accelerated towards the beach. Keeping my paddle behind and in the water enabled by to steer a straight course despite me leaning back as the nose went under. No great shakes and after a couple more breakers I was ashore.


Another trip up the river before making the short trip back to base camp. More drinks around the campfire and another cracking sunset. 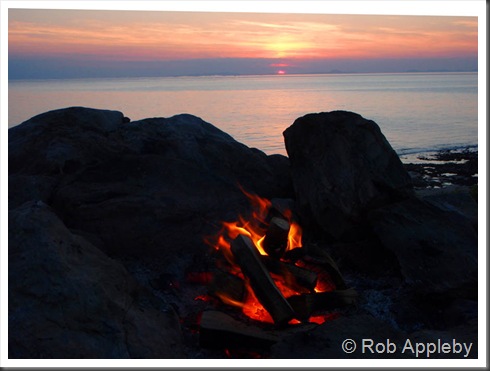 Waking the next morning we were greeted by a strong wind so the planned final days fishing had to be canned. It wasn't too disappointing as I wasn't looking forward to a 5-6 hour drive home on completion of fishing.

So we went there in the hope of a Tope but caught none. Disappointed?, of course, but did it spoilt the trip??, not in the slightest.


The venue is stunning, the weather was cracking and there were plenty of fish being caught. The evenings were well oiled and sociable, you could hardly ask for a better few days away.


To be repeated, I might even catch a Tope next time !
Email ThisBlogThis!Share to TwitterShare to FacebookShare to Pinterest

Great write up Rob; often its just good to be out on the water in a good spot in good weather enjoying nature, which you certainly had. As I know too well, you can enjoy yourself without catching fish.

Minor technicality, but I'm curious about your fishfinder mount. i've read your write up under the rigging section, and messaged you before about it, but any further detail would be appreciated, please. I think you mentioned that you modified a ram mount or tube to get the FF in position - maybe a chopping board washer i can see?? Presume that you can read it OK by your feet? I'm still toying with mounting mine where the Prowler has the central tackle box so that its closer to me, but not sure yet.

The only reason I did it that way was to allow me to fold the whole thing down so it didn't foul the roofrack when I rolled the yak on upside down.

Hi Rob, amazing write up and pictures. I am really seeing what a great way kayaking is to fish. What sort of fising yak would you recomend to someone who has never really paddled before.

The Prowler 13 seems a really popular first choice, now pretty much taken over by the Trident range. I went for the Big Game, no regrets whatsoever, love it, though it's not to everyones tastes.

Hi Rob - thought that I had posted this but it didn't show up on my next visit! Great write up as usual. Could you give the name/location of the campsite as it looks like a fantastic spot for a yakker!

Hi Steve
the campsite is Cae Du located just north of Tywyn. North of the river on the coast as seen.

Many thanks Rob - love your blog/website, very classy!