The smoothound season is in full swing though right now I'm not catching them in any great numbers. The reason is simple, WEED, mountains of the stuff. I really should have taken a few photos of my recent misery.

You sit there, whipping a nice big juicy peeler crab bait onto your Kamasan 3/0 chemically sharpened hook prior to flicking it 20 metres downtide. No sooner have you tightened up when the tip starts to bend over. A couple more minutes and there's a steady bend in the rod, five more minutes and it's pulling right over. Reeling in, nope, pumping in would be a far better description, reveals a ball of weed the size of a football.

Regardless of how many times you lift anchor and move to another spot there's just been no escaping the damned stuff. The weed is right through the Solent at the moment, I even drove for over an hour the other day but failed to escape it.

I fished below the New Forest yesterday, launching at the end of Tanners Lane. I've fished from the shore here many times in the past, though it the first time from the yak. I fished with two others and we tried a few different areas, the furthest a mile and a half from the launch site, though sadly we were unable to escape the weed. 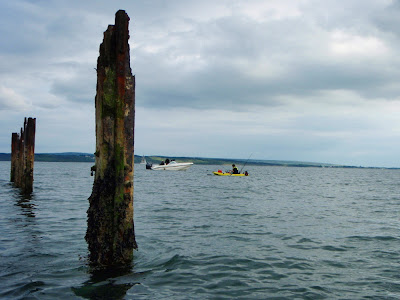 We fished until it was getting dark and called it a day. Glancing at my watch showed about thirty minutes to last orders at the local pub, so de-rigging was accomplished in record time before driving like a bat out of hell. This resulted in the highlight of the evening, a cracking and much needed pint!

Peeler crab is in short supply at the moment and I'm hoping that the Spider crab will start making their annual appearance in order to replenish my rapidly depleting stocks. I reckon I can muster enough for a couple more trips before I have to delve into my wallet for some sub-standard bait. Fingers crossed the spiders show up sometime real soon.

Whilst talking about bait the mackerel are here, though they are extremely patchy to say the least. I've had a couple of goes at bagging some, the first trip resulting in four, the next trip in two. Hard times indeed!

I managed another trip mid-week in which I did a little batter managing thirteen in total. 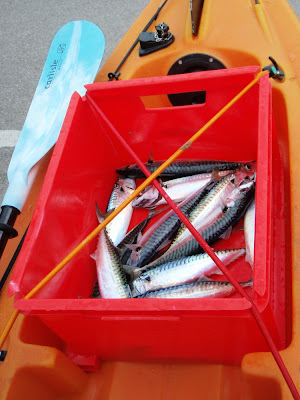 It's frustratingly hard work, though the thought of paying almost £3 for three undersized blast frozen fish (that turn to mush once thawed) keeps me going.

I packed recently for a days bream fishing, driving over an hour into Dorset only to be greeted by a strong onshore blow. I sat there for a further hour watching it grow in strength. Before long it was white horses as far as the eye could see. Just how do the weather forecasters get it so wrong at times?!. Another failed trip.

It's also that time of year in the Solent when the amount of recreational shipping increases dramatically. Although there are no doubt some superb sailors out there, many clearly lack basic skills, and more importantly common sense and simple observational skills. All this leads to you having dual eyeball control like an Apache helicopter pilot!, one eye on your rod tip whilst the other is doing a 360 degree scan of the surrounding water. All good stuff.

Whilst out on the water the other day a huge trimaran came sailing past with a truly amazing turn of speed, quite something. Loud mechanical clankings inside as course changes were made and sails bought about, it really was something else. Look closely and you can see a person on the far hull. 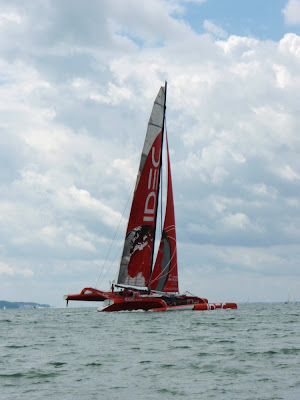 Maybe I'll upgrade my yak after all !

The fish are out there and I'm desperate to clock up some serious time on the water. Though to aid this the weed needs to ease and allied to that the weather needs to come on side. It'll come good, though whether it's soon enough to please me is another matter, sadly out of my control.
Email ThisBlogThis!Share to TwitterShare to FacebookShare to Pinterest

We get the moss & weeds later in the summer, but it is a drag. Better luck next time!