It was one of those days when I wasn't sure if I was going to make it out or not. One moment it's all go, the next moment all is cancelled However, with an hour or so to go to my planned launch time things came good, so I quickly starting throwing gear into the car.

The weather forecast seemed pretty good, forecasting light south easterly winds to continue into the early hours before picking up into a fresh wind.

I met up with Gary, a friend from work who's new to the sport but finding his feet quickly. We launched around 8pm and paddled to short distance to our chosen mark. The breeze was a little fresher than anticipated and put us in a wind over tide situation, not ideal. This resulted in us anchoring from the bow which I find far from ideal when fishing for Smoothounds. Why?, because they have a habit of going nuts when approaching the yak and will tangle with just about anything in the water!

The rig was a simple 3' running ledger baited with peeler crab. During the earlier sessions last month I'd found myself missing a lot of fish, though switching on to Kamasan 3/0 uptide hook has increased my hook-up rate dramatically.

We settled down into a routine and over the next hour I missed a couple of decent rattles, purely down to the fact that I had great difficultly in maintaining a tight line to the bait. Finally the tide turned and the yaks followed suit putting the winds on our backs and pointing downtide. This put us in a far better position, anchored from the stern with a tight line to the bait.

It wasn't too long before the rod tip bent over and I was into my first Smoothound of the evening. Nothing sizable but it gave a good account of itself. 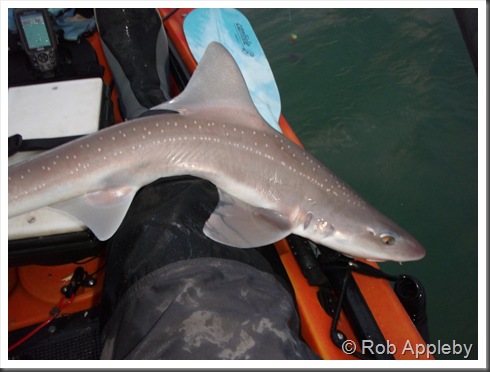 I'd borrowed a couple of spider peelers from a friend, though on cutting them open they turned out to be 90% water, a bit of a disaster as I was limited on bait. However, more by luck than good judgment I'd packed a large bag of peeler crab legs. I sat there quite happily shelling them, tying them into bundles to use as bait. They turned out to be a cracking bait and produced a few good fish during the evening.

The weed was heavy at times, though fortunately is seemed to come and go making the session quite fishable. Rather disappointingly the wind freshened up considerably, peaking out at around 20 knots. The sea state lifted accordingly and a messy swell started to pass through the Solent.

Gary was reaching the limits of his comfort zone so headed a little further inshore in search of some calmer water, though the easterly blow was going to make that a rather difficult quest!.

The last couple of fish were of a decent stamp providing me with some cracking sport. The next couple of months provide, what's for me, the best sport that the Solent area has to offer. 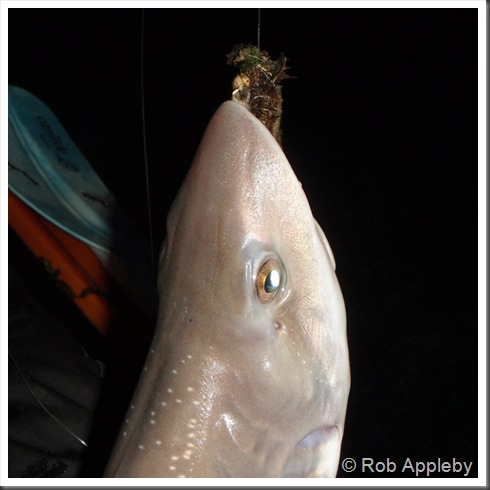 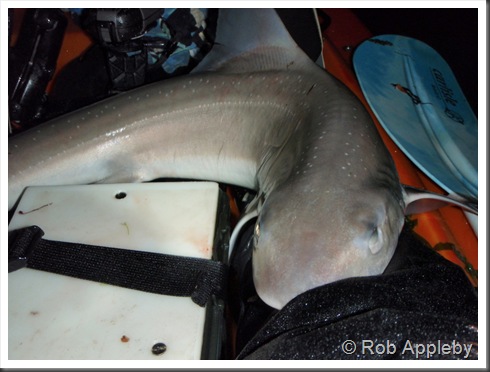 The weather continued to deteriorate, as much as I had no real problem fishing it for a couple more hours it seemed sensible to call it quits. Being Gary's fourth or fifth trip there's also no point in sickening yourself by fishing in poor weather conditions. 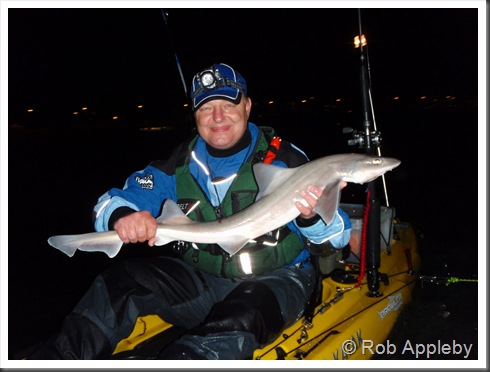 I retrieved my gear and headed over to where Gary was fishing. As I closed in I could see he was unhooking a decent fish, his best so far. A couple of photos were duly taken before we headed back to shore.

Despite the disappointing weather conditions the fishing turned out to be pretty good. I reckon Gary's confidence is growing rapidly and he's clearly getting to grips with the sport !

The weather is looking a little grim for the next few days though hopefully I'll be back out chasing the Smoothounds later next week, cant wait !

Nice haul that Rob, crackin read your blog is. Wish I could convince the missus to let me have a yak but land-locked in Derbyshire your opportunities are somewhat limited!!! All the best
Paul

Back at the hounds again then Rob, well beleve it or not im actuley ready for the smoothounds just need a good evening to head out over the solent. you never know you my see me this year!!.

You're welcome to join me anytime Justin if you fancy, the sport is picking up well at the moment, sadly so is the weed !

Great report, Rob! I admire the dedication of you UK kayakers - out at night in 20 know winds, with cold air and cold water to boot!

Those smoothhounds look similar in size to the small blacktip sharks we catch here in Florida during the summer months. Are the smoothhounds good table fair?

Keep up the great blog reports and tight lines to you!

Thanks for the comment Brian, takes a wee while to appear on my blog, approval due to spam, etc.

I believe that smoothounds were eaten in the past, still are in fact from time to time. However, my understanding is that they are somewhat poor on the taste buds, great sport though!!