After the demise of my Kokatat drysuit I found myself in the market for a replacement drysuit, this resulted in the purchase of a new Typhoon PS220 Extreme. I was originally looking to purchase the Typhoon Multisport, though it was out of stock at the time so I raised my budget a little the PS220 was the result. It’s not exactly cheap at £500, so it immediately raised the question as to whether it was worth the extra money or not.

It turned up within 3 days or ordering it from the Wetsuit Outlet, a free fleece undersuit was included. The first thing that struck me was its weight, it was considerably heavier than my Kokatat. I was a little concerned that this additional weight may prove a hindrance when re-entering the kayak, though a few re-entry drills in my local pool immediately laid this concern to rest. The extra weight isn't noticeable neither whilst wearing the suit.

The suit is yellow and black, mainly yellow above the waistline which will aid visibility should you be on the kayak or in the water. The suit is constructed from a 4 ply breathable material with generous amounts of Cordura reinforcing all the high wear points. Another potential area of concern was the zip arrangement, the PS220 is fitted with a rear entry zip, not something I’d experienced before. I’d really wanted to avoid a latex neck seal, the PS220 is fitted with ‘Glide Skin’ neck and wrist seals, what is that exactly??, well more on that a little later.

Anyway, onto the initial review, here’s a couple of stock images. 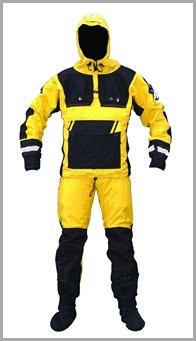 When unpacked I rolled it out and gave it a good inspection. Surprisingly the zips were closed, I was always under the impression the zips should be left in the open (relaxed) position. As already mentioned the suit is heavier than what I’ve experienced before, though there’s also lot of material, hood, pockets, lower leg covers, etc. 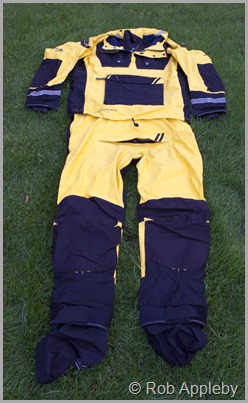 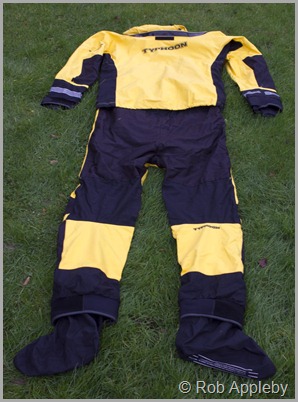 Looking at the top of the suit there are pockets, and as well as the neck seal there is a concealed hood and a zippered neck to provide excellent storm protection. 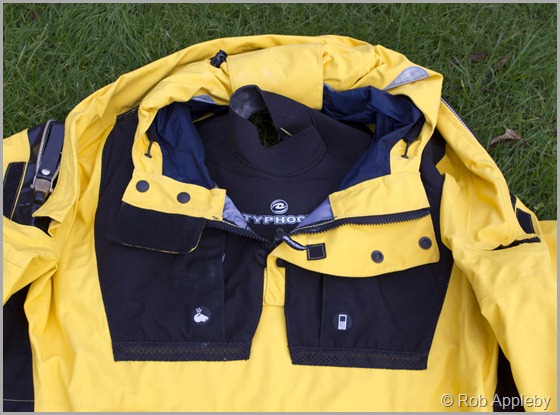 The two upper pockets are labelled with a whistle and an IPod. The whistle pocket actually contains an orange emergency whistle, a nice touch. The other pocket, as the picture suggests, is intended designed to house a suitably waterproofed IPod. There’s actually a hole from the IPod pocket into the hood itself to allow the headphones to be suitably routed. I’m not too sure if I’ll ever take an IPod afloat with me, though it’s also ideal for the storage of mini flares, etc. These pockets are not watertight, I’d probably rate them as splash proof. Should you go into the water they would certainly flood, though they should self drain without any real problem. 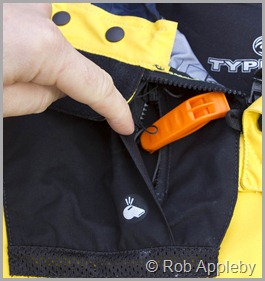 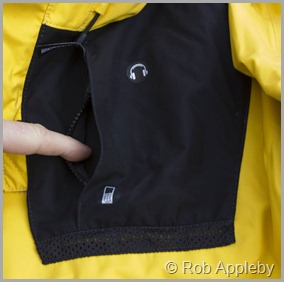 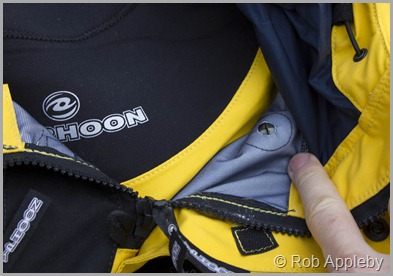 A nice feature of the PS220 is the hood. Under normal use the hood is rolled down behind the head, though with the release of two studs it’s ready for use!. There are elastic drawstrings to adjust the hood as required. The neck can then be fully zipped up for maximum protection. There’s a lip on the front edge of the hood to help keep the rain off your face. Some Solas patches are fitted to the hood to aid visibility. 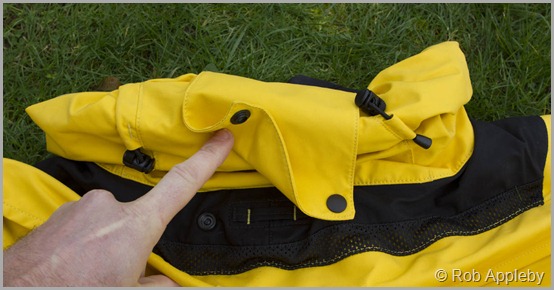 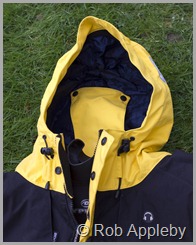 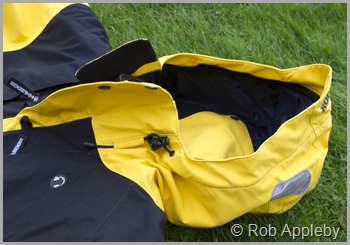 Situated on the front of the suit, above the waist, is a large multi-access pocket. The main feature is a fleece lined hand warmer pocket which is accessible via a zip from either side. A point of note is that with a PFD fitted it’s unlikely to be useable. However, whilst off the kayak for prolonged periods it would no doubt prove useful. 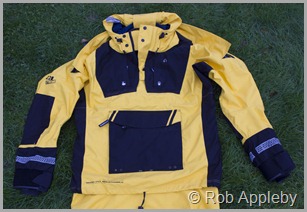 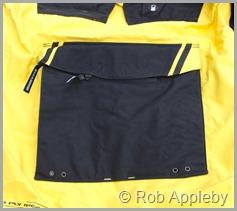 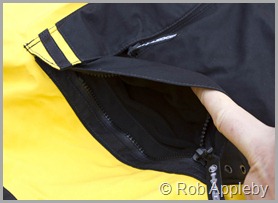 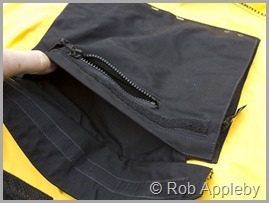 The upper part of the suit is designed to fit over a kayak spray deck and can be pulled tight with the aid of a drawstring. It has no detrimental effect for use on a SOT kayak. It’s drawn down for a comfortable fit. Should you find yourself in the water, the area drains instantly when pulling yourself back onto the kayak. 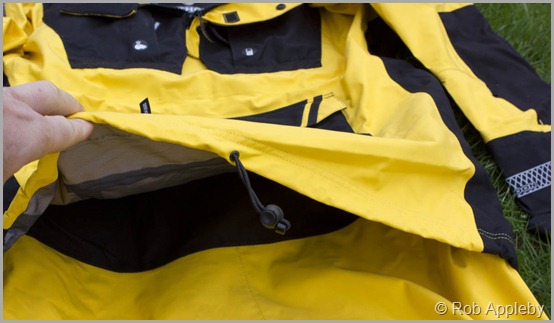 The wrist and neck seals are constructed from Typhoon’s ‘Glide Skin’ which produces a low friction seal. It looks like 3mm neoprene with a smooth rubberised inner surface. It works extremely well, the neck seal being easy to pop into and out of. Only time will tell how well they will perform in long term use. That said initial impressions are very pleasing! 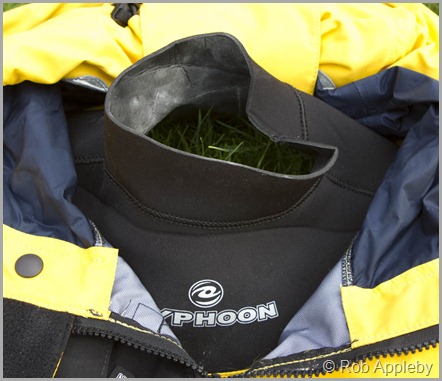 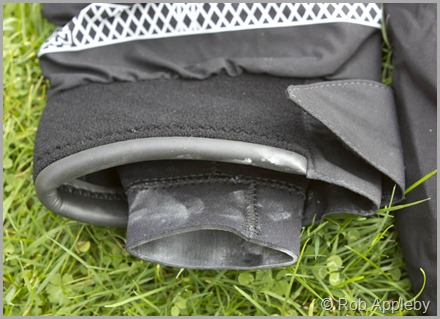 Moving on to the main zips themselves. The suit comes with a convenience zip fitted as standard. I couldn’t imagine having a suit without one, getting one retro-fitted is particularly expensive!. The zip is protected with a flap, so it’s now one less thing to snag yourself on. 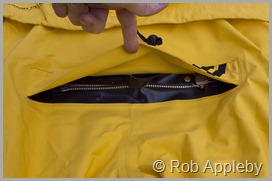 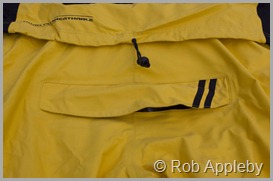 The rear entry zip is of Typhoon’s ‘Hypercurve’ design. Basically it’s sewn into the suit in a curved position so it sits more naturally when worn and provides improved comfort. I was concerned about the difficulty of closing the rear zip once into the suit. However, the zip is easy enough to close and open, a little technique is all that’s required. As with the convenience zip there’s a protective flap that covers the rear zip once closed. However, it’s not that easy to put this flap into place, not that it’s of any real concern.

Finally, looking at the legs. The socks are an extension of the lower inner leg and are a generous size to allow for two pairs of thick socks. There are lower legs covers that to allow the suit to work better with full height boots such as my Chota Mukluks. Once into the suit you can roll these leg covers up, fit your boot, before rolling the covers back down and securing with the Velcro strap. Again, it’s a neat solution that prevents fewer snagging hazards, whilst keeping the heavier Cordura material outside the boot. 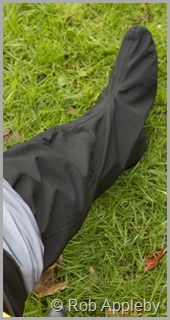 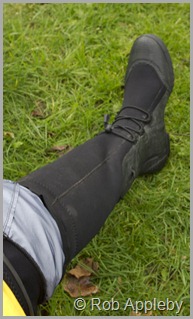 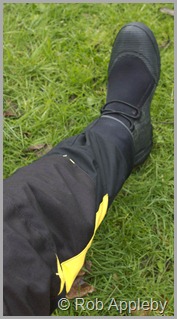 Getting the suit on is easy enough. It’s a case of stepping into the suit through the rear zip. Once your legs are fully into the suit there are internal braces that are then positioned onto the shoulders. These are adjustable and enable positioning of the suit for the most comfortable fit. It also allow the suit to be partially removed when off the water if required.

That’s pretty much covered the suit. I’ll post a follow up review after a few weeks providing some feedback on how it performs in the longer term.

Cheers Andy. It keeps me busy during this period of crappy weather.

Nice review mate. I did consider this suit but thought it would be too heavy for summer use, so I'll be interested if you could compare it when paddling to your old suit (as you know, that's the one I have).

Great review! Looks like an awesome suit. Our weather has taken a nice turn so I'm planning on hitting the water tomorrow!

How works your dry suit now?

Thank you for the information :)

Works a treat thanks, no problems to report.

Hi Rob - my Kokatat SuparNova Angler paddling suit has started to leak in both legs, although it might be covered by warranty (just 3 years old) I'm considering another suit. The one thing I'm a bit worried about the Typhoon ps220 is whether it's too hot in warm conditions? The Kokatat is pretty tough but lightweight on top which means I can wear all year round with no problems. How do you find you PS220 in warm weather? Has the suit started to leak anywhere?

Hi Rob - any update on this question, now looking at the ps330?

Hi Kester
I've had no issues in warm weather to be honest. I've just removed under layers to compensate as required.

I've pedalled my Hobie for miles and never experienced any overheating issues. I was concerned that peddling would cause rapid wear on the inner legs, but no, nothing visible.

Yes it's quite heavy, though not something's that's ever being noticeable or obtrusive when worn.

I'm taking delivery on a PS330 next week, purely as I got it at a price I couldn't refuse. My PS220 will soon be up for sale as a result.

Just got the PS330 myself. It does feel pretty thick and heavy, but not tested it yet on the water. Build quality seems excellent though, so provided I don't 'cook in it' while paddling it should be fine.

I have to admit I'm not a fan of hand warmer and front pockets, as you can't get at them when you're on the water due to your pfd (which also has hand warmer pockets that I also don't use! ). It's just superfluous stuff I can do without. Kokatat get that right.

I'll probably keep my leaky old Kokatat for the summer when I don't mind getting a bit wet.

I'll leave you to review the PS330 as I'm thinking of retiring my blog this year, probably outlived its usefulness last year to be honest!

Hi!
I also tested it. I wrote about it almost the same as you, only in Hungarian :))
http://hardcoreseakayakers.blogspot.hu/2015/03/typhoon-ps220-xtreme-szaraz-ruha-teszt.html

What's your experience been?

It's been used a LOT and still has a couple of years left in it.