I’ve not fished for a month or so, partly due to poor weather, though I’ve spent quite some time teaching my daughter some kayaking basics. The urge to actually get afloat fishing was taking hold and the weather looked to be playing ball. It didn’t coincide with a weekend so I took some holiday and made plans as to what venues I was going to fish.

I was looking to overnight in Wales, fishing Stackpole in Pembrokeshire, before heading southwest to fish Porlock Bay and Lynmouth on the southern side of the Bristol Channel. However, like all the best made plans they went straight down the toilet!.

I was travelling towards Minehead on Monday morning, following some slow moving traffic, in front of me was a large truck. It clipped the verge scattering large rocks over the rock. With no time to brake I picked the ‘best’ route through the debris, however, I didn’t make it. A hard thud resulted in a front wheel blow out, the result being one shredded tyre. Typically the spare was in the boot, the boot lid didn’t lift much with the kayak loaded. With the kayak moved out of the way the boot had to be unloaded to gain access to the spare wheel. Needless to say I wasn’t too impressed and by the time the wheel was replaced I was running late. I revised my plans and headed to Watchet to purchase some bait before launching from the Blue Anchor slipway. It wasn’t the venue of choice, though at least it maximised my remaining time on the water.

At this venue there’s a good chance of catching Rays, Conger Eel, Smoothound with the outside chance off a late Cod. Baits were unwashed squid and lashes/whole mackerel mounted on 6/0 Pennel rigs. I tend to add 8” of 50lb wire to the hook just in case a decent conger takes the bait. I do at times make do with 80lb monofilament, though there’s a good chance that this will get bitten off!

The tides were at the top of the springs and 8oz was required to hold bottom during the peak flood period. The conger were feeding and several fish to about 20lb came to the kayak. A nylon trace was bitten off so both rods were soon upgraded to wire traces. A fierce bite, followed by a solid run and a good tussle resulted in a Smoothound of about 10b, a couple more hounds at around 8-9lb were also caught over the next hour. 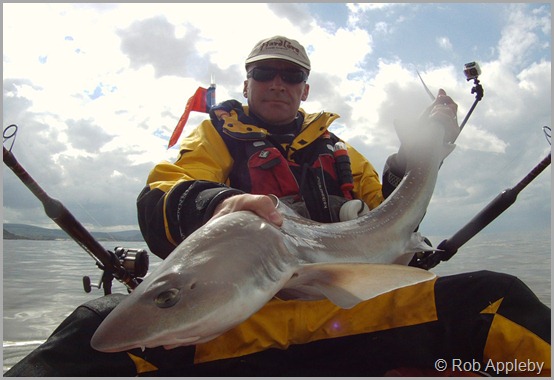 What little wind that had been present during the session dropped off completely and an eerie calm came over the sea. I really love moments like this, an oil calm spreading over the water. Just being afloat in conditions such as this is simple fantastic, fish are merely a bonus.

Once the tide turned onto the ebb I decided to call it a day and head home early, if for no other reason that I had to source a replacement tyre!