Whilst I was out today putting my 8yo daughter through some kayak basics I took the opportunity to practice a few drills of my own. Yup, I managed to launch leaving the PFD in the boot of the car, though the lagoon was small and the water relatively shallow so I wasn’t sufficiently concerned to run back and get it. As it happens, despite ‘burping’ my drysuit, enough air remained within the drysuit to make me quite buoyant, not hugely different from wearing a PFD. However, that’s no real excuse, just an observation!

I’d purchased an NRS Paddle Float some weeks ago and I’d yet to really put it to the test. Watching a few videos on You Tube is one thing, trying it out on the water in anger is another. There’s certainly a technique to it though after a few attempts I was sufficiently happy that should I require it, I’d be competent is its use. It’s not needed for a standard self rescue, however a few months ago my drysuit was damaged and flooded when I capsized making a normal self recovery impossible. I’m sure if I’d had this piece of kit I’d have managed a successful recovery despite my tricky predicament.

Fitting the float to the paddle whilst in the water can prove a little tricky. I found it easiest to either place the paddle into the holder or jam it into the seat webbing, securing it quite firmly, prior to fitting the float. Once fitted it’s inflated in seconds and ready to go. The idea is to place it across the kayak and to brace against it whilst making a re-entry. I found it most effective when the bare blade was wedged into the kayak seat webbing on the opposite side of the kayak, the paddle lying directly across the kayak over the seat. In that position once my hand was placed onto the shaft of the kayak it was effectively locked into position. The first images just missed me locked down onto the paddle as I lifted from the water, I’d just let go having bridged the kayak.

I took the opportunity to practice multiple self rescues on both my Big Game and the Hi Marine Mini Angler. Both kayaks were also used to ‘rescue’ my daughter whilst floating in open water. Easy to achieve of both kayaks due to their inherent stability, though the Mini Angler was reaching its maximum recommended capacity! 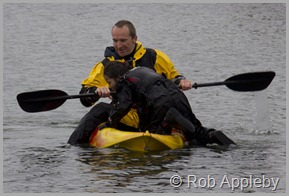 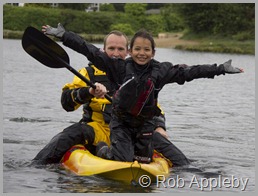 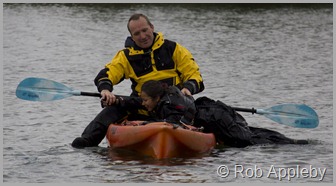 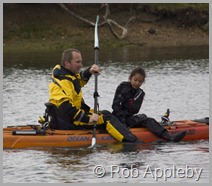 So as much as I’ve spent a couple of mornings getting my daughter afloat, I’ve taken the opportunity to practice a few drills, something that we should all do from time to time.