I’d planned to fish on Sunday evening, though an afternoon BBQ and a little too much alcohol resulted in those plans failing miserably. Monday was a Bank Holiday, though a late evening session would no doubt impact on my enthusiasm to get out of bed for work the following morning. I pondered, packed the car before finally making at decision at the eleventh hour that I’d go fishing. The venue was Hillhead and I was hopeful of an early Smoothound. 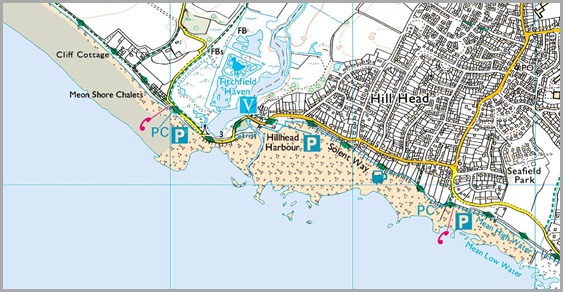 Baits were a little limited due my last minute planning, some crab or fresh ragworm would have been nice, though I had to settle for some mackerel and unwashed squid. Rigs were simple running ledgers. I’d normally fish this venue with my 6-8lb Shimano Beastmaster rods, though after dropping both rods over a two week period I’d put them in to the local tackle shop to have some rings replaced.

Conditions were perfect, the wind was light and by the time I’d dropped anchor and deployed my baited rigs there was only thirty minutes remaining before sunset. I was pleased that I’d made the effort to get afloat, there was a Cuckoo calling in the distance, the occasional Curlew flying overhead, there are definitely worse ways to spend an evening.

Whilst preparing a whole squid I couldn’t help but notice a tail sticking out!. It was tightly fitted inside the squid and I needed to slit the squid in order to remove the fish. Interesting!, a small perch?, bass perhaps?. 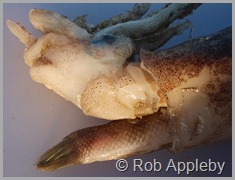 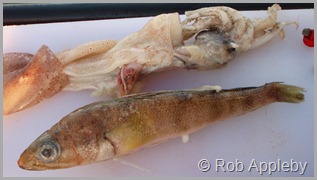 Slack water arrives at Hillhead a couple of hours before high water itself, so things were slow to begin with. That said, even when the water did begin the flow there was a distinct lack of activity!. I decided to have a play with the Lowrance Elite 4 DSI fish finder that I fitted whilst rigging the Outback. It’s interesting when looking at fish returns, there’s no fish symbols or arches to look at. Fish returns appear as dots, apparently fish shapes can be discerned under the right conditions (large fish/shallower water, etc). Once you get a feel for what you’re looking at (no fish alarms neither) it actually produces a far more realistic display. Yes, structure is incredibly clear, though it’s easier to pick out fish as opposed to false alarms for weed, etc. 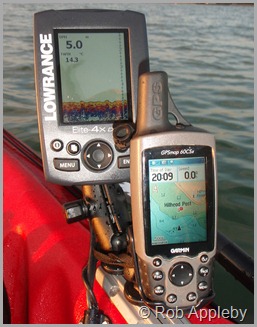 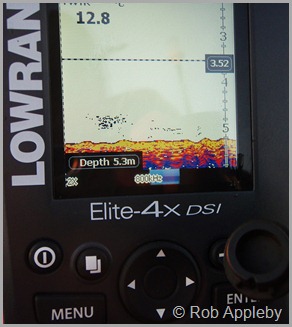 Above in the right photo, you can clearly see a shoal of fish with either stragglers or predators following behind. The Lowrance has a ‘track back’ feature which permits the user to scroll back and analyse ‘historic data’. It’s really handy to be able to look closely at a return at your leisure, as opposed to watching it disappear off the screen before you had a chance.

Getting back to the fishing, well, it was incredibly slow. I’d had one ‘rattling’ bite, though that was it. It was a little disappointing, though the evening was quite stunning so I sat sat back and relaxed. There were some fish moving on the surface, possibly school bass or mullet. At times they swam close to the kayak, before getting spooked and charging away, only the surface wake giving away their presence.

As darkness fell I was still fishless and frustration was beginning to take hold. I was replacing the baits every thirty minutes and with a fresh set of baits in the water I was still holding out some hope of a last minute fish. 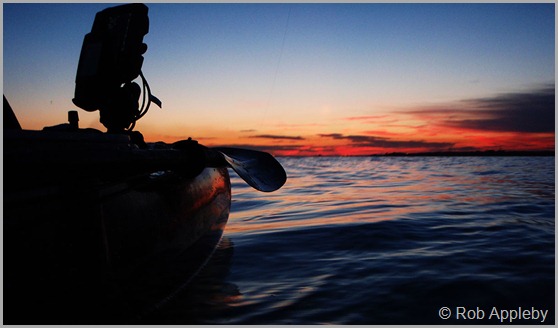 My prayers were answered, the squid baited rod being hit quite hard and I immediately found myself hook into a rather lively fish. It made several short runs and seemed to shake its head at times. Was this going to be my first Smoothound of the year?. Even when close to the kayak it stayed quite deep, I was feeling quite hopeful!. Needless to say I was a little surprised when an average sized Thornback ray broke the surface, a little disappointed as well. 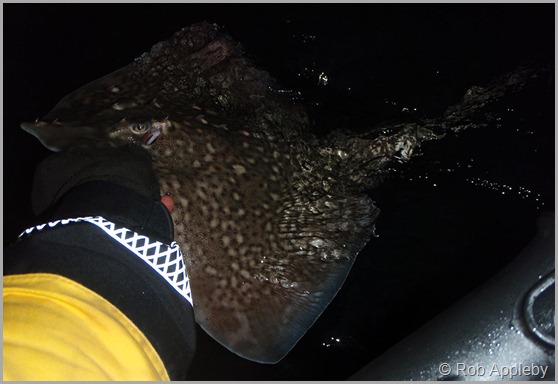 It was no monster, perhaps around 7lb, and after a couple of photographs it was quickly unhooked and released. Ideally I’d have fished 2-3 hours into the ebb tide, though I really didn’t fancy feeling like a zombie when heading into work, so I called it a day and headed back to shore.