It was after 5pm when my phone rang and Jim was on the other ending letting me know he was heading out now. I wondered why he felt the need to tell me this, though it became immediately clear when he reminded me that we’d arranged to fish that evening!.

I’m not one to panic, though I was a few miles from home, dropping my daughter off at her dance class. That game me an hour to get home, feed and shower my son, sort my gear, load the car and be on the road. Timeframes were tight, but doable.

An hour later I started the car and hit the road, talk about recovering the situation!. I’d grabbed a bag of unwashed squid from the freezer, and along with the fresh hardback crabs that Jim had collected, there’d be sufficient bait for the session.

Target fish were Smoothound, though Thornbacks rays, Dogfish and the odd school Bass were also likely to be caught. I’d expected Jim to be afloat when I arrived, though he was there rigging up and we ended up launching together shortly after 7pm. High water was just after 10pm, the plan being to fish until midnight at the latest. 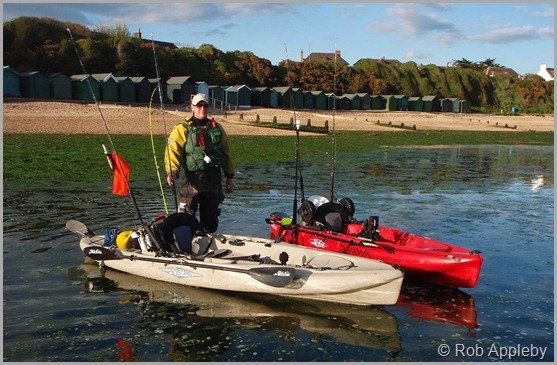 As you can see in the above photo Jim has recently treated him self to a Hobie Outback, he’s spent a couple of weeks getting it rigged ready to fish, hopefully this session would get some slime over his kayak!.

It was only a half mile or so to the mark, about 5m of water which would push to over six at high tide. The tide was fairly weak, typical for this mark as slack water occurs well before high water itself. Rigs were simple running ledgers, one baited with half a squid, split down the middle, the other with a hardback crab. I’m not accustomed to using hardback crabs, all my previous experience has been with peelers or soft backs. I stripped the legs off and hooked them through the leg sockets.

The breeze was quite strong, and with little tide, we were initially anchored side on to the choppy water. It was a tad uncomfortable, though once the tide flow picked up we were swung into the tide making for a better fishing experience. I did learn something interesting about the Mirage Drive, with the pedals centralised (fins down) it really grabs the tide and pulls you inline with the tide in a matter of seconds. A cross wind will swing the kayak across the tide, previously I’ve used a drogue to overcome this with good effect, though the Mirage Drive actually proved more effective at counteracting this. I most impressed at this, fins up against the hull, kayak swings across the tide… fins down, kayak immediately swing back into the tide. Yup, I was also bored due to the lack of fish activity, things were slow!

Apart from a couple of small knocks, it was two hours before I had the first proper bite and found myself hooked up. I have to admit it felt a little feisty, with a bit of head shaking thrown in for good measure. I was thinking school bass, so I was rather surprised when a dogfish broke the surface. I’d forgotten how much fun my Shimano Beastmaster 6-8lb rods were. It needed measuring to qualify for the Kayak Wars competition, measuring Dogfish isn’t the easiest task, however, it was accomplished and the fish returned.

The next half hour was again rather slow, though the squid eventually tempted another fish. This one was not so lively and I was in little doubt as to what it actually was. Sure enough another Dogfish appeared on the surface and after a couple of photographs it was soon back in the water.

By this time the sun had set and the wind was beginning to freshen. It seemed highly unlikely that any fish of note was going to be caught this particular evening. With the wind blowing fairly hard and a few white caps appearing across swell, I raised the hood of my Typhoon PS220 drysuit and sat tight, ever hopeful! 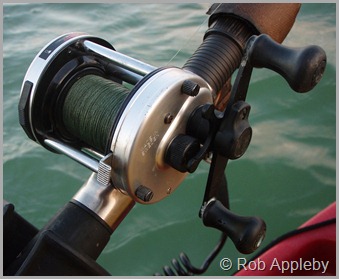 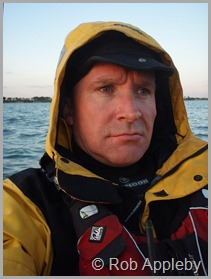 The crab-baited rod was hit quite hard, a couple of aggressive tugs being registered at the rod tip. I picked the rod straight up and waited. I pulled into another hit and briefly felt the weight of a fish, then nothing. Had I been too eager?, the rod was replaced and I waited. A minute later the fish was back, and after waiting a few moments, I tightened up and felt the weight of a good fish. A second later the fish ran hard, stripping 15-20 yards of line from the reel. It ran straight across my other line on its next run and I found myself swapping the rods over whilst it continued to strip line from the reel.

With the drag tightened up a little the fish came under control and I started to bring it back to the kayak. It stayed deep and proved extremely lively, making several shorter runs over the next couple of minutes. The rod was bent over hard, the fish hugging the bottom below the kayak. The first time it surfaced its tail slapped the water hard as it surged for the bottom once more. I saw that it was no monster, though it was going like stink and I was grinning from ear to ear!

With Jim shouting words of encouragement (such as ‘stop messing about with it!’), I finally bought it to the surface and tailed it aboard the Outback. It was a good sized Starry Smoothound,  a nice double I reckon. 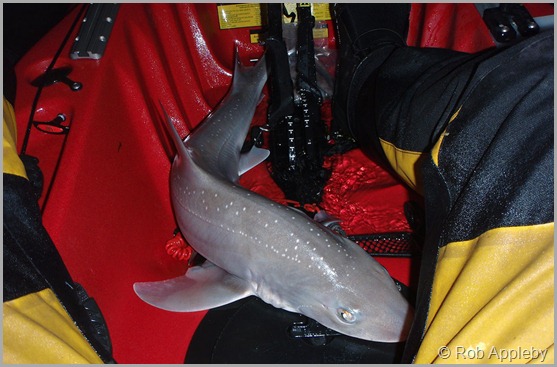 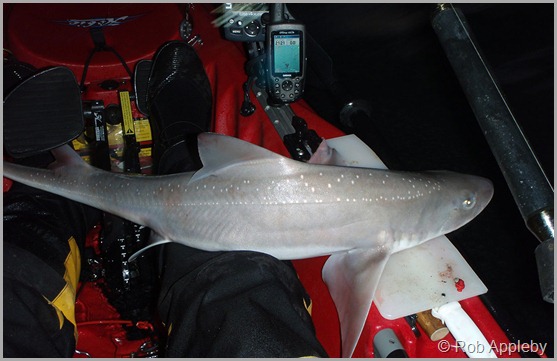 After I’d managed to snap a couple of ‘safe photos’ I decided to lie it over the kayak to achieve a better picture. I manoeuvred it in a cracking position and grabbed the camera, focus, click…… apparently a split second too late!! 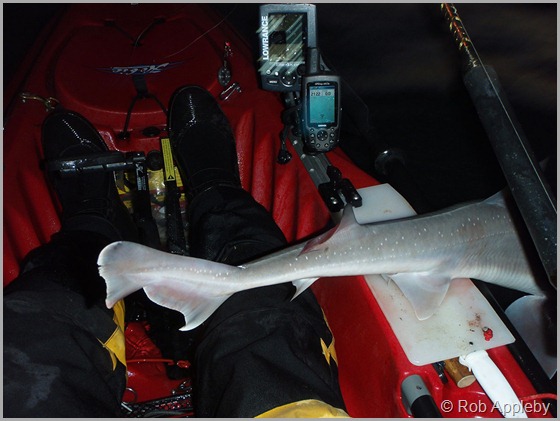 With the Smoothound swimming away I baited both rods up with hardback crab, hopeful of another fish before the end of the night. However, it wasn’t to be, in fact I failed to register another bite. The crab was clearly proving attractive to other sea creatures though, namely the whelks!. It’s not unusual to retrieve a bait to find one or two whelks attached to it. They can be pulled straight off or often drop straight off, making off at a good speed. Though this was quite different, I’ve never seen so many whelks on one bait, the bait was completely obscured from view. The crab was clearly the favoured meal of these over-sized snails, though they didn’t exactly turn their noses up at the squid neither. 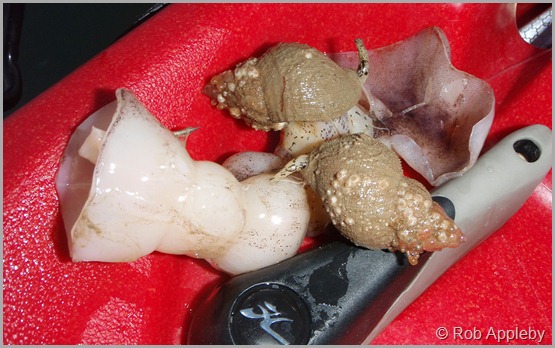 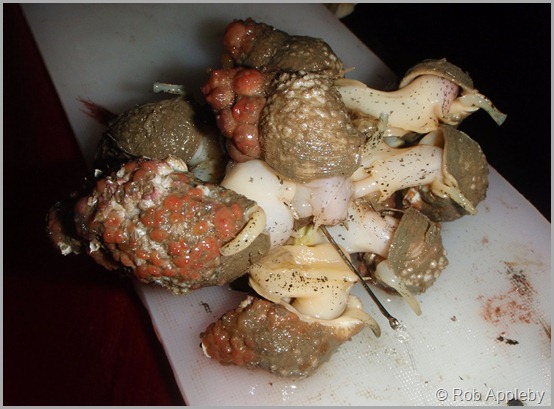 I think we hit the beach before 11pm so it was another relatively short session. Jim didn’t find any fish, but in all fairness, the fishing is particularly hard compared to previous years. I looked back to some photos from this venue in early May 2008. The water temperature back then were almost 16 Celsius, last night it was just over 12 Celsius, that’s quite a difference.

I feel the need for a change of scenery so the next trip will be a road trip/overnighter at a location that’s yet to be decided.

Those are some crazy snails you got over there. Nice fish, those things are amazing looking.