I finished rigging up the Elite 7 HDI a few days ago, though I’d not managed to get onto the water to have a play with it due to the extremely poor weather that we’ve experienced this past week. Today saw a break in the weather with the high tide nicely aligned with the time slot that my kids were at school. It was a case of all systems go!

As I wasn’t fishing it only took a few minutes to load up the car and hit the road. As I was launching locally into the upper reaches of Portsmouth Harbour, the journey only took 5 minutes. Rigging was equally as quick, battery, Lowrance 7 HDI, paddle and a bottle of juice.

I had played with the unit in the garage and taken a few moments to peruse the instruction booklet. Perhaps I should have taken it along?, though I reckoned that I could fumble my way through things as requied. 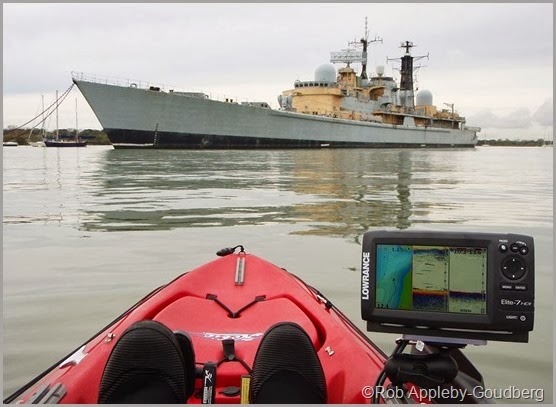 The unit takes a good thirty seconds to power up, then the Lowrance logo is replaced with the display screen. Firstly, the screen is bright!, I turned it down from the max level of 10 to 8, though this will be darkened right down for night use. There is in fact a night mode, though I’ve only tried it briefly. The screen can be viewed in multiple customisable formats, basically triple page screen, split screen, single screen and the steer screen. The chart, broadband and down imaging (DI) sonar can be viewed in the various screen formats, either alone in single screen format, or combined within split and triple screen (combo pages).

There’s a ‘setup wizard’ which guides you through the initial setup, asking questions such as do you fish lakes, what depth, type of fishing etc. However, it’s worth mentioning that despite this, it states in the instruction booklet to use ‘freshwater mode’ in less than 100’ of water to avoid problems tracking the bottom. Most of my fishing takes place in water shallower than that so it was duly set to ‘freshwater mode’.

With the unit up and running I peddled out into some open water. I decided to setup the overlay data first, placing the time, voltage, speed, depth and water temperature onto the display. That was easy enough, positioning and re-sizing the various data items was very straightforward. Anyway, I initially set the display to the three panel page and pedalled off to a pair of derelict ammunitioning cranes. 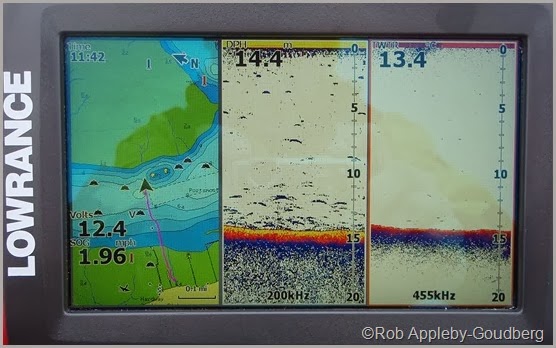 Mmmmm, well the cranes were there last time I was here!, sadly no longer. They are still showing on the Navionics charts, it’s a real pity and they provided some excellent structure to fish. There was still evidence of their foundations on the sonar, though to all intense and purposes they were gone.

The sonar setting needed a little tweaking, I founding turning up the surface clarity on the DI reduced the noise dramatically, whilst targets were still clearly visible and had not noticeably degraded as a result of changing the settings. There was a lot of weed pushing through on the flood tide and this considerably cluttered the broadband sonar display , whereas the DI display only shows the weed as much smaller returns providing a far clearer display. The DI defaulted to 455Khz, though it can be selected to 800Khz to provide better definition. I didn’t compare the 800 to 455khz during this trip.

On the DI, fish are displayed as a return according to size and profile. This may be a simple dot or a larger sized return. It takes some practice to discern fish returns on DI and I’ve been gathering some experience over the past few months whilst using my Elite 4 DSI. On the broadband sonar fish returns show as ‘arches’, so it’s quite handy to have the broadband and DI side by side for comparison. You can also overlay the DI onto the broadband, though I didn’t try that out in anger on the water today.

DI excels when is comes to accurately imaging structure. Below are a couple of photos, the first showing an underwater piling, the second a series of wooden piles that were part of an old wooden pier. The upper photo shows some fish returns to the left of the piling, possibly some small fish to the right as well (more noticeable on the broadband). Though it’s the clarity of the DI structure returns that really stand out. 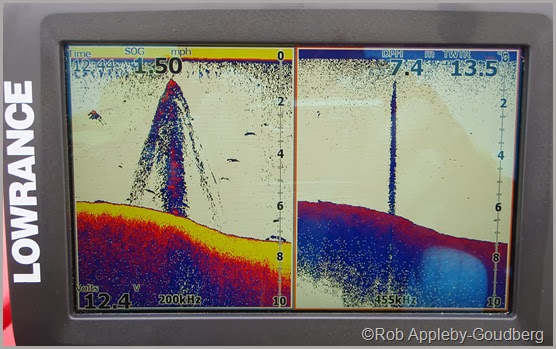 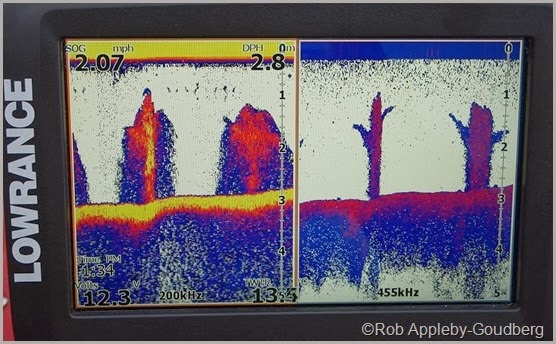 I pedalled around the stern of an anchored warship awaiting disposal, coming close to a large metal mooring buoy. This was secured to the sea floor with a very heavy gauge metal chain and gave a very strong return. However, the broadband return is very cluttered with the structure being rather unclear, whereas the DI provides a very different picture (see image below). 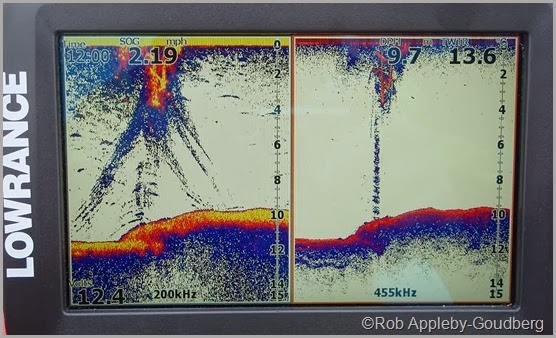 I played with both sonars in single page view, though I immediately missed have the direct comparison that the side by side display provided. Perhaps having both sonars overlaid when in single screen will work better. I’ll try this in due course and provide some feedback later. The two photographs below were taken within seconds of one another, permitting both boroadband and DI in single screen to be compared. Again, the difference is extremely noticeable, with the broadband being far more cluttered and lacking in structure definition. However, fish returns (arches) are clearly visible either side of the buoy rope compared to the much smaller, harder to distinguish, returns on the DI. 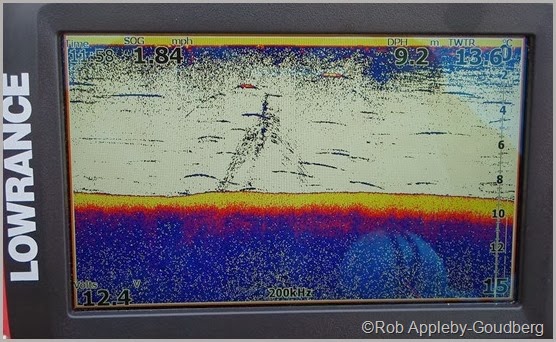 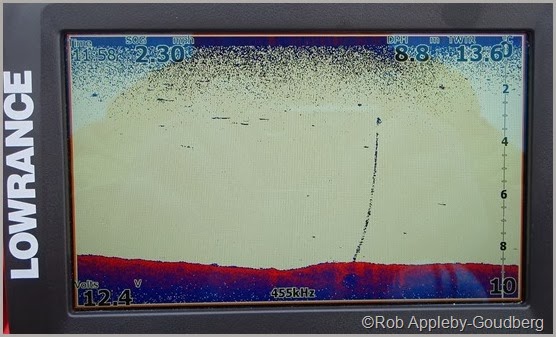 I moved on and began to have a play with the Navionics Gold charts that I’d just installed. When viewing multiple screen you are required to press the ‘page’ button twice to switch between the split panels. For example if you press the zoom button, it’ll either zoom in/out on either the broadband, DI or chart depending on which segment of the display you have selected. This is where I wished I’d bought the instruction book along as it took me five minutes to work out how to select the separate panels within a split/tri screen display. 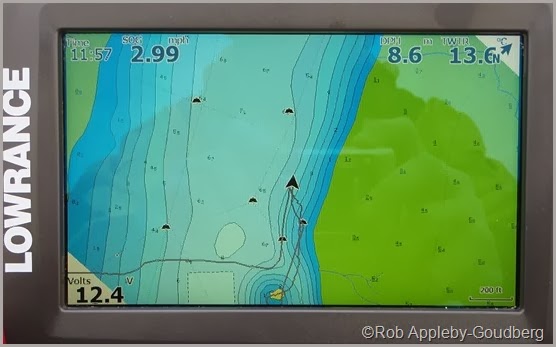 I had ‘tracks’ selected on, the track colour can be changed to suit the user. Setting a waypoint is simple enough, just hit the ENTER button and edit the details as required before saving it. Accessing saved waypoints is straightforward via the menu options. What I really do like is the Lowrance ‘track back’ feature which allows the user to use the cursor to scroll and look back as the historical sonar data returns. You can then save a waypoint from a mark than has been passed over and lies some distance behind. There’s also the option to immediately select navigation back to that mark… very handy!

Lastly is the ‘Steer’ screen. This displays shows your current track, direction to waypoint and additional navigational data. What I don’t like is that is states your ETA as ‘clock time’, as opposed to time remaining. The problem being that there is no ‘real time’ clock to compare to the ETA. I’m hoping this ETA can be changed to time remaining, I’ll report back on that at some point. You can also follow the ‘navigation course line’ that appears on the chart page when navigating to a waypoint, my preferred method of navigation. 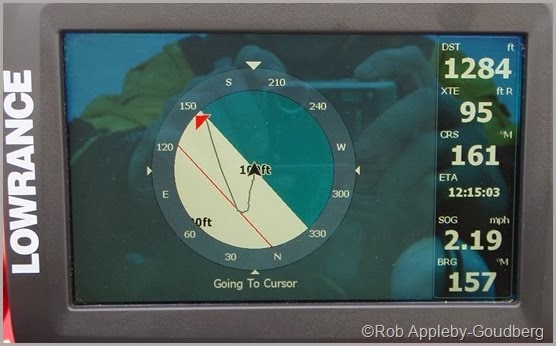 You can set parameters that will set off alarms, these include off course, drag anchor, shallow water, etc. I deliberately steered well off course and once 100’ off course (value can be changed) the alarm sounded. 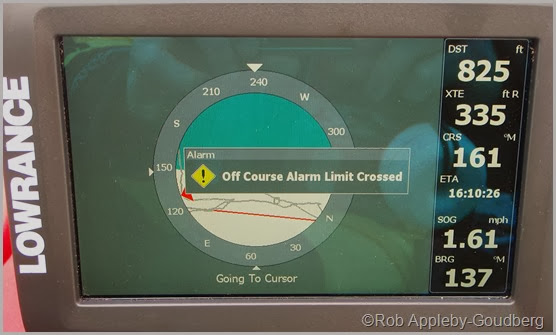 It’s my first day at using this unit so I was at times fumbling through the menus, though this will no doubt improve with use!. The Navionics charts themselves look great, though not noticeably better than the Bluecharts that I have loaded to my Garmin 60Csx. What I didn’t like was the difficulty that I experienced in locating the tidal information. On the Garmin it a couple of button presses and you’re presented with a list of local tidal stations. It appears that it’s more difficult on the Navionics, with the user having to zoom well out in order to locate a tidal marker (something that I failed to find!). I’ll have a good play with this and provide some better feedback when I’m more familiar with the software.

Ok, that was a very short introduction to my brief experience with the Lowrance Elite 7 HDI. Once I really get to grips with this unit and clocked up a few fishing trips, I’ll come back and provide a longer term review to how this unit and the Navionics software perform. That said, first impressions are very pleasing and the unit appears to be very straightforward to use. The location adjacent to the foot well works very nicely for me, I cant see it’s position being an issue at all whilst fishing. It’s very easy to reach and operate whilst afloat and underway. 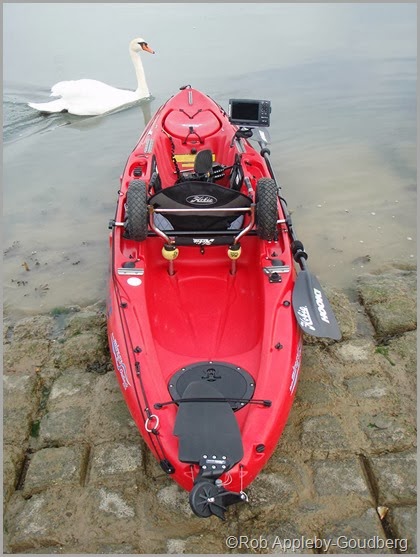 The cod season is beginning so I hope to be out there fishing within the next couple of weeks, weather permitting. The temperature is dropping so I’ve been checking through my winter clothing, enduring that I have sufficient layers and thick socks in my clothing box ready to go!

Nice report buddy! And of course a beautiful sonar.

That was very helpful for me thank you for posting! What I haven't figured out or mat not have the function of keeping track of the miles you put on on trips. Is there such a thing? Tnx

Hi,
I no longer have this unit, I'm now using an HDI 7. However, I don't recall it being able to log distance.

Thank you for your reply. I stopped by a westmarine store, the gentleman there knew this machines inside-out. Once your on the Navigation pad,menu, overlay settings and it's there. I finally figured out the unit. Now I'm locking to upgrade to the Gen 2 "HDS7". I've played with them a lil, very nice unit! However looks like I would have to go to collage to use this unit.
Again thank you!