Over the past few years I’ve had a couple of attempts at making a kayak trailer, there was the Mk1  which was a beast, bought as is and basically not up to the task. Little time was wasted on it and it was moved on rather quickly. Mental note: don’t buy blind of Ebay without having seen such items in the flesh. Then I progressed and put a lot of work into the Mk2, a much improved beast, though it’s too heavy and the massive storage space was under utilised.

I wanted something lightweight, something that could carry my Hobie Outback and my soon to arrive Hobie Adventure Island. ‘Off the shelf’ kayak trailers don’t really cater for this, not with fishing kayaks generally being much wider than traditional kayaks and canoe, plus the AI is a beast in itself. After giving this some thought, I purchased a motorcycle trailer (3 bike model) that had a well built galvanised frame with a maximum capacity of 750kg. 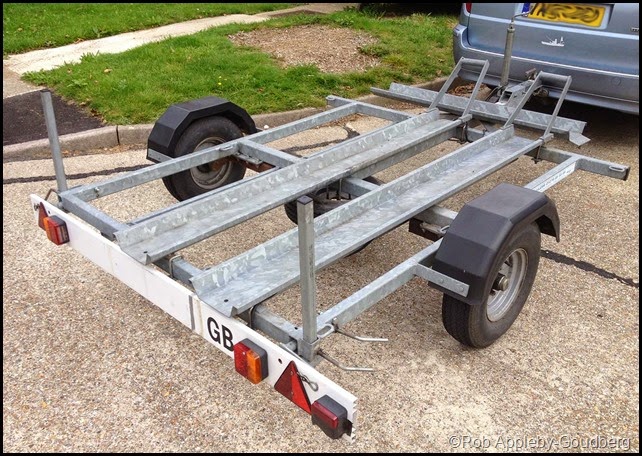 One thing I also liked about this particular trailer was the extendable light board, though it turned out that it didn’t extend nearly as much as I would have liked. It also had rear support legs to enable the trailer to be stable when unhitched from the vehicle.

I was also thinking ahead, I also wanted to have some removable storage capability on the trailer as well as the option to fit a roof tent in the future, something I’d need to consider when designing the frames.

Most kayak trailers tend to have two main frames to support the kayaks, I decided to fit three, partly to spread the weight, though mainly to permit fitment of a roof tent and a aerodynamic roof box as required. I also needed two of the frames to be 67” apart to permit the correct fitment of the cradles for the Hobie AI. A distance of 67” was too big to fit a roof box or roof tent, so the third frame was a must.

I gave a lot of thought on how to fix the frames to the trailer’s main frame. I really didn’t fancy bolting them (lots of drilling required into  a nicely galvanised trailer) and welding was a no go for the same reasons. Hence I decided on U-bolts as used on trailers. High tensile items, more than capable of clamping the frames firmly into position, permitting them to be re-positioned if required.

For the frames I used 30mm box section steel, 3mm in thickness. Some may consider this over-engineering, though add 80-90kg of kayaks, a roof tent and two adults and it should make a lot more sense. These would be welded for strength and neatness. I welded short sections of 50mm steel angle (6mm thickness) to the base of the frames that permitted the frames to ‘sit’ onto the existing trailer and to be securely clamped into position. 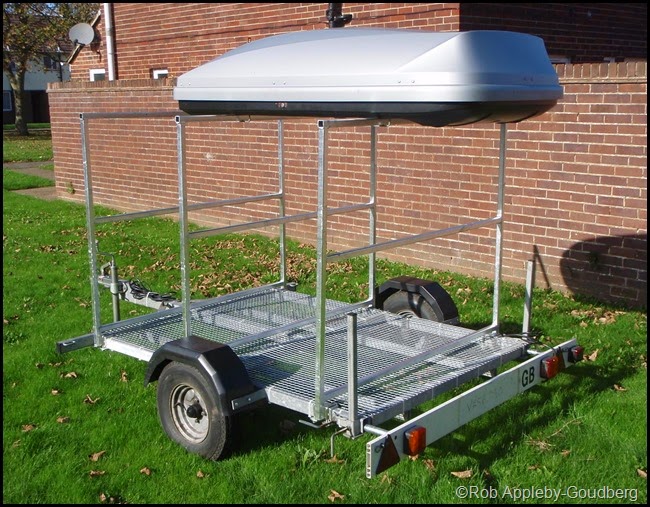 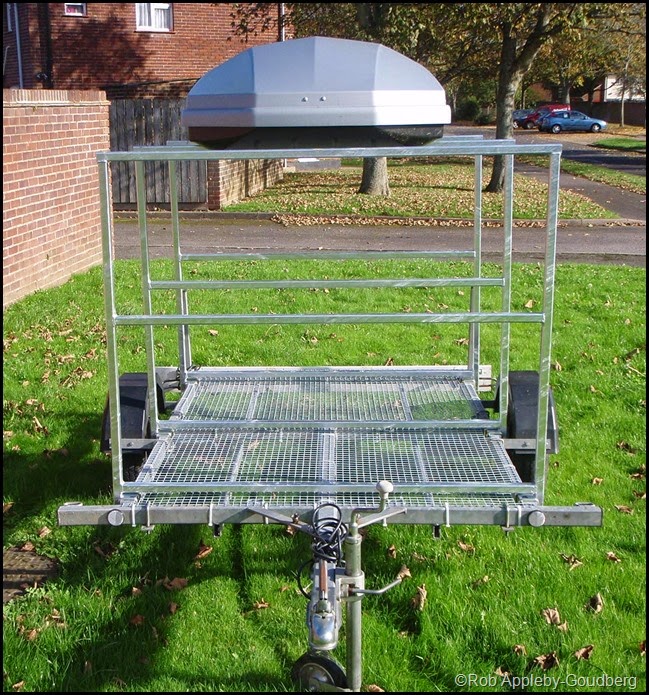 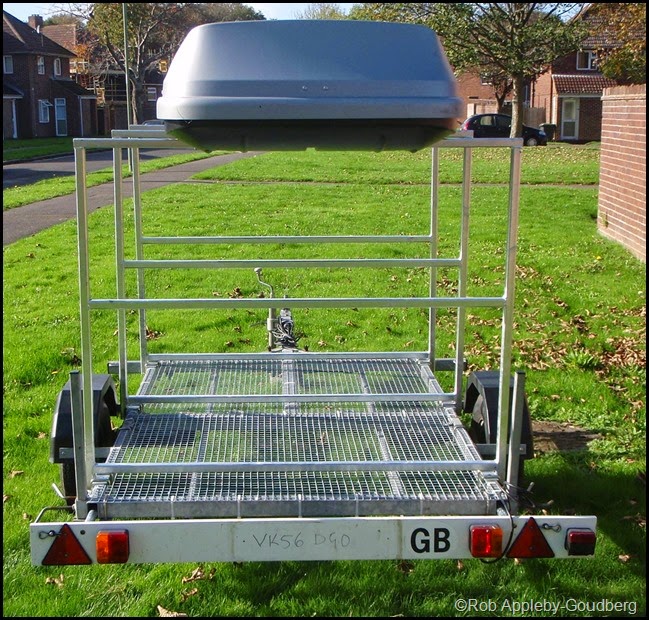 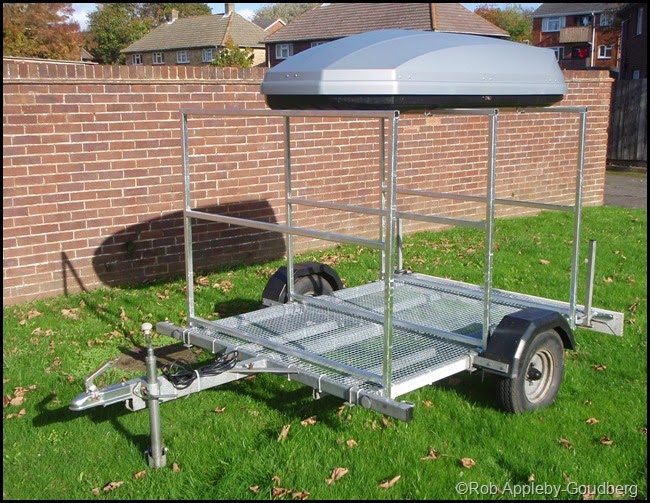 The above photo was taken during early assembly, the roof box was placed onto the rear two frames just to get it out of the garage whilst the front frame was awaiting fitment, though for normal use if will be placed on the forward to frames to improve weight distribution. The centre frame is positioned forward of the trailer axle for the same reason, frames weigh in at around 40lb (18kg) each.

As mentioned earlier, the trailer features an extendable lighting bar, though it only extended about 50cm. The main trailer frames are 200cm long, so I welded 220cm steel tubes (2mm) in place of the originals, permitting me to extend the bar comfortably up to 150cm out to the rear. 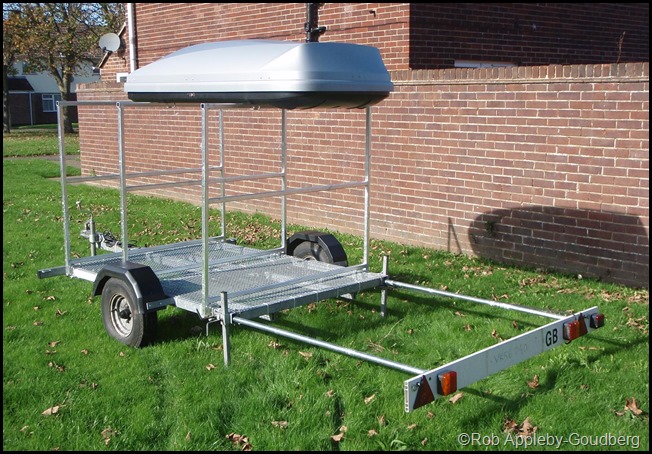 I have fitted so 25mm galvanised steel mesh sheet (2.5mm gauge) to the base, it’ll enable me to easily attach items for carriage as required, it’ll also enable the trailer to be used for household duties when needed.

So what’s left?. Well I’m extending the drawbar by a metre so it can effectively carry my kayaks when they’re positioned centrally on the trailer. The extension has already been manufactured and galvanised, I’m just waiting for of a bag of bolts to finish the job. The jockey wheel will also be moved forward by about a metre to improve weight distribution and the spare wheel will also be positioned towards the front. The trailer is still light and easily manoeuvrable, with suitable nose weight it should be a pleasure to tow.

I’ve been researching roof tents that are suitable for the UK & European climates for some time now, most tend to be designed for warmer countries and I fear they wont have the longevity that I require. Weight is also a major consideration.

I should have the trailer finished in the next 3-4 weeks, I’ll post an update with photos of the finished item soon.