Having departed the Bristol Channel the next trip saw us go in the hunt of Pollack off the Southern Cornish coast. I've fished this venue before and I was confident that it'd produce a good few fish for us. The launch at Cadgwith is straightforward enough over the heavy shingle beach, though recovery is somewhat more arduous!.

I love this area, once you push out from the launch the scenery is simply stunning. You see  kayaks just paddling around enjoying the views and I certainly can't blame them. However, we were here to fish and large Pollack were the prime target. We started off trolling as we headed westwards. 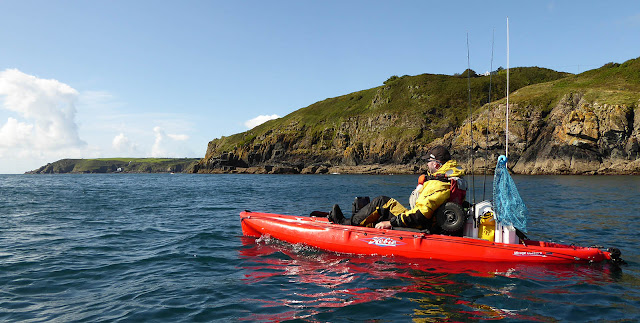 I was using a deep diver running 8-10 metres deep.  I had a hit quite early on and managed an average sized pollack which was a good start. 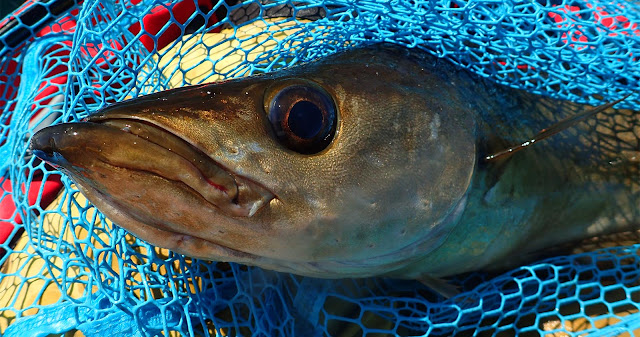 The wind direction wasn't ideal and it steadily increased preventing us from getting to the marks that I'd wanted to fish. We preservered, though the fishing was tough to say the least. We took a few more small fish, though the larger fish were highly elusive.

Having spoken to a local chap sometime later it transpired that the Pollack fishing was unseasonably late and wasn't expected to pick up for some time. Despite our best efforts we didn't fare too well, perhaps a little spoilt by our earlier successes?.

We called an end to the session early and drank more beer whilst planning another session at Sennen Cove. A group of kayak anglers had arranged to meet up the following day so we decided to join them. Sennen Cove is a popular surfing venue, one drive around the car park at midday will confirm this!. There was plenty of surf, though one side of the bay was sufficiently sheltered to launch. There's a harbour off to the left which is protected by a wall, a very sheltered launch spot, something that we'd be most grateful of at the end of the day.

Getting fresh bait is always a bit of a headache when visiting Cornwall. Local tackle shops are very limited with the only fresh bait being farmed worm with the chance of live sandeel when in season. Though the latter is never a cheap option. We were very short of bait (none!) so if we wanted any, we'd be catching it!

We headed out towards the centre of the bay and began feathering with some hokkais. I eventually found some shoals hard on the bottom, though they weren't the mackerel that I'd expected. They were instead Sandeel and they were coming up 3-4 at a time. I kept these in a rear tankwell were the regular sloshing of saltwater kept then alive without a problem. The Lowrance HDS 7 came in really handy whilst chasing the bait. Being able to utilise the structure scan to look left and right was most helpful in keeping me on the bait. There were also mackerel to be had and within 30 minutes we had plenty of fresh bait for the day.

I initially chose to anchor close to a drop off, though the tide was far stronger than I'd expected!. After carefully retrieving my anchor I moved 20 metres shore-side and the difference was amazing. Just a few metres took me out of the severe current . With a section of mackerel fillet down for bait I was soon into my first fish of the day, a Bullhuss. 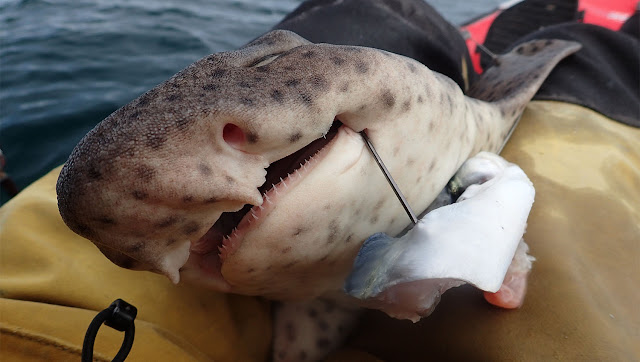 I caught a couple more larger Bullhuss, though I failed to take photos as I was more into just enjoying the fishing. I'd planned to take some video during the week, though it never happened. It's nice to do, though at times it detracts from the fishing experience.

Daniel was having much better success spinning with Fiish Minnows and was catching some nice sized Pollack. 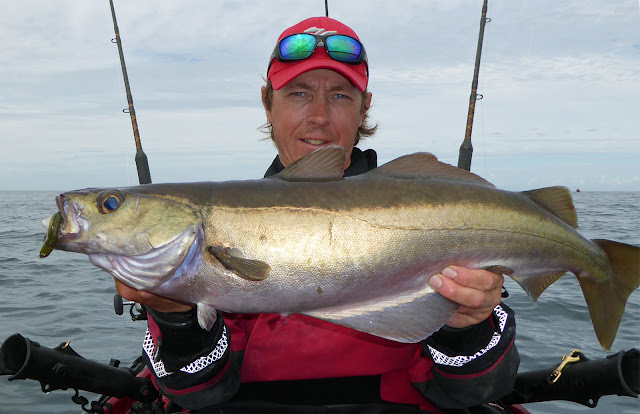 This caused me to change tactics and I started to fish with live sandeel, slowly fished on the drop and retrieve. Gosh, to say that it's an exciting way to fish is an understatement!. Most of the time my bait was hit halfway down on the drop, the bait being literally smashed with me having to hang onto the rod rather tightly!!!. I caught several nice Pollack to about 8lb using this method. I think that if I was to fish here again I'd take my livewell and fill it with Sandeel and spend the day targeting Pollack and Bass.

Below is the first fish I took to live Sandeel, not a monster but what fun! 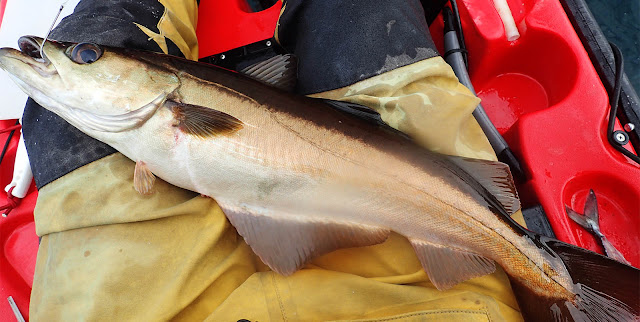 I eventually fancied a change from Pollack fishing so I headed out towards towards two charter boats located further out into the bay and dropped anchor onto a clean sandy bottom. I was hoping for some Blonde and Spotted Rays so I baited up with some fresh mackerel on one rod and sandeel  on the other and the waiting game began. 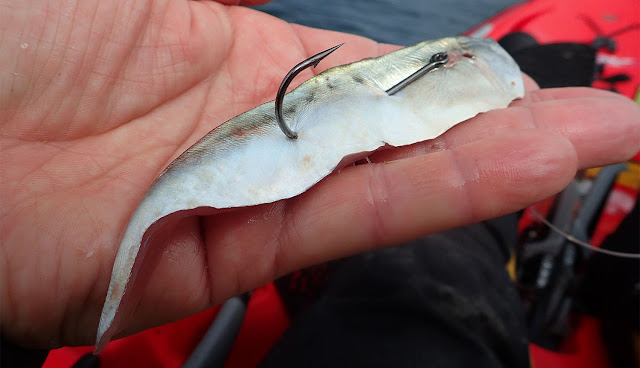 The wait turned out to be quite short, a few nods of the rod tip and I felt the unmistakable weight of a ray hanging in the current, but what species??. A Blonde Ray broke the surface, another species for the trip! 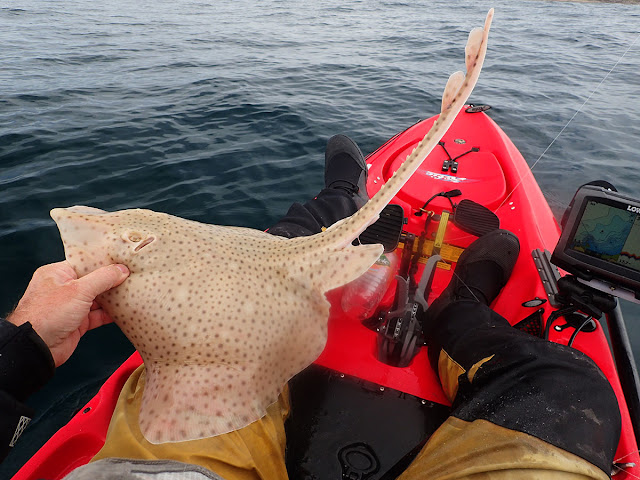 This was the first of several, just one after the other, I certainly wasn't complaining. I then had a bite that was a little different and it certainly felt different once hooked up!. Something new?

Indeed it was, another new species to the kayak... a Turbot. A small specimen, but it was great to catch all the same. 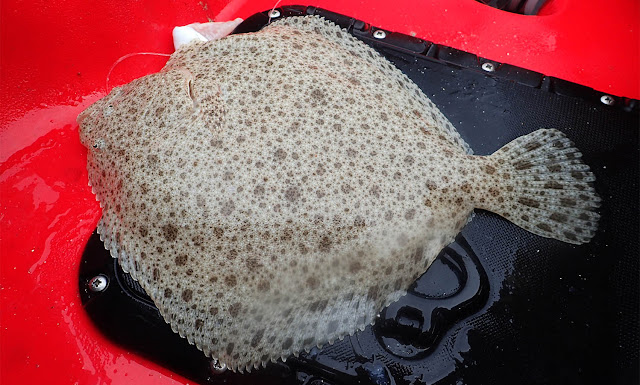 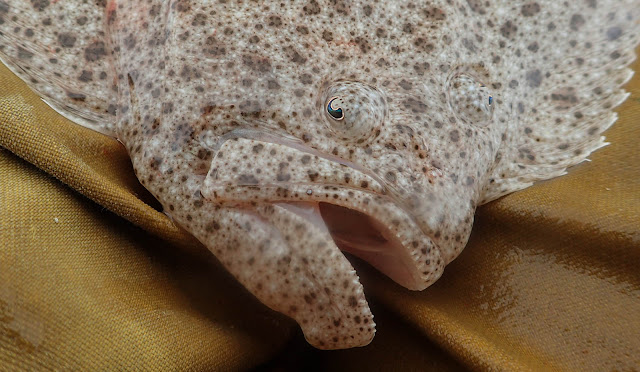 Despite the ever building swell we continued to fish and catch throughout the day. Here's Daniel hooked up into a ray.

We eventually pulled anchor and headed over toward a reef that was looking a little intimidating due to the large swells that were rolling across it. We fished quite close in, picking up a few Pollack, though the swell continued to build. At the height of the tide the swell was large and it had started to detract from the fishing. There was clearly a lot of big surf hitting the whole of the beach... remember that small harbour to the side of the bay?. That's where we chose to recover to! 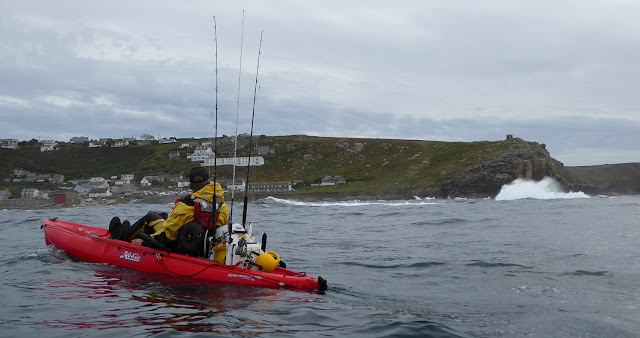 This bought our 10 day road trip to an end. We fished for 7 days, drove over 1200 miles and caught 23 species of fish totaling well over 750lb. It's definitely one of my most successful road trips and I have to thank Daniel van der Post for his excellent company. There were firsts for both of us and some great memories and plenty of empty beer bottles.

The 2016 road trip is already in the planning stages and it's likely that it will see myself and Daniel travel to Ireland, a completely new experience!
Email ThisBlogThis!Share to TwitterShare to FacebookShare to Pinterest
Newer Post Older Post Home