About 3 months ago I finally took the plunge and purchased a handheld VHF radio. There's plenty on the market covering the price range of around £30-200, so the question was what to buy ?.

As a saltwater kayak fisherman there were a few requirements:

After surfing the internet and reading several reviews I narrowed my choice down to a Standard Horizon unit, the 750E, and the ICOM IC-M33. Despite being more expensive the ICOM won the day, purely from reviews and various recommendations. The unit cost around £120, though prices vary greatly so it's worth doing your research.

The transmit power is more than adequate at 5W (High), 1W (Low). I've carried out radio checks with the coastguard at a range of up to 7 miles without a problem, this was actually better than I'd expected, the general rule being 1W per mile. 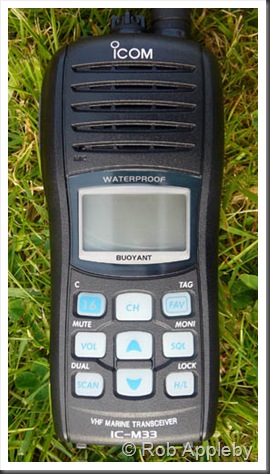 The unit is somewhat rounded in shape making it quite comfortable to hold. As well as the large display on the front panel there's also 9 large buttons that provide simple straightforward operation. There's quick access to channel 16 as well as simple control of the volume and squelch functions.There's Dual/Tri-watch functions, the latter being my favourite as it allow me to monitor channel 16, the coastguard on channel 67 as well as my call channel for that particular day. The standard scan function allows 'tagged' channels to be monitored, handy for keeping up on the local fishing chatter.

The unit can be easily switched between International and American channel frequencies should the need ever arise.

The antenna is a detachable flexible item, not easily damaged. 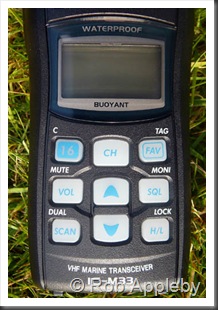 There is the facility to 'tag' your favourite channels making accessing or scanning them straight forward.

The display is quite large, measuring 32 x 16 mm 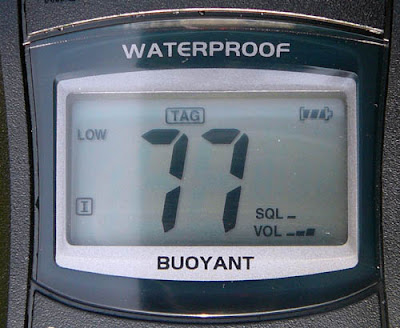 The display features a clear 2-digit channel number indication. The volume and squelch levels are shown in the display. LCD and key back lighting are standard features, ideal for night time operation. The battery life is also displayed in a clear 4 step indication.

Should the speaker or microphone become clogged with water, it can be cleared using the 'AquaQuake' draining function. This is activated by pressing the Scan and H/L buttons simultaneously, resulting in a vibrating sound that clears water away from the speaker grill. 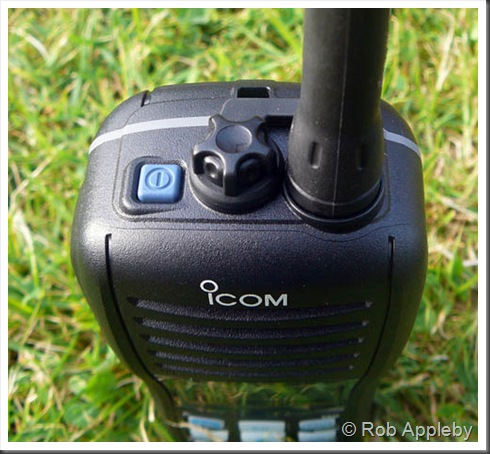 The top on the unit houses the antenna, the ON/OFF switch and an optional speaker/microphone connector, the latter having no real use on a kayak.

The battery supplied with the radio is a Li-Ion battery proving approximately 9 hours of operating time, from the following ratio of usage: Tx (Hi): Rx: standby = 5:5:90. I've easily achieved 8 hours of usage with plenty of battery life remaining. 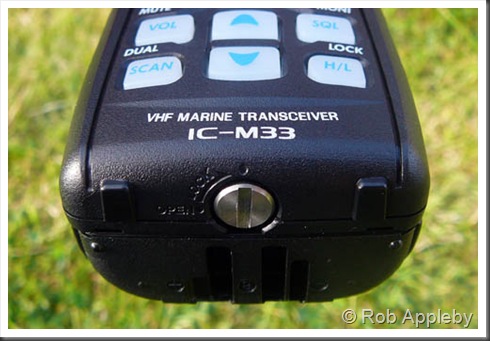 The battery is released from the base of the unit with the aid of a penny coin or the like. There's no real requirement to release the battery as the complete unit can be placed on the supplied charger, the only requirement being that the radio is switched off during charging. 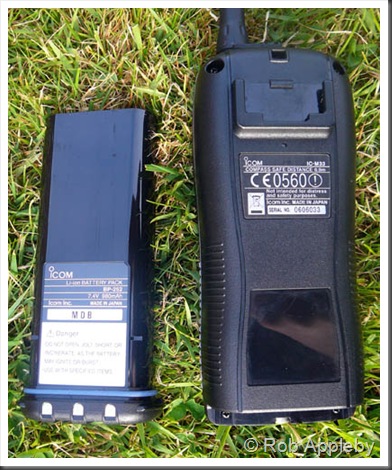 My unit came with an optional alkaline battery holder allowing AA alkaline cells to be used in lieu of the Li-Ion battery. There's also an optional belt clip which affixes to the rear of the unit to allow external attachment to a PFD, etc. I've not utilised this item as it makes the unit a little to bulky to fit within my PFD pocket. 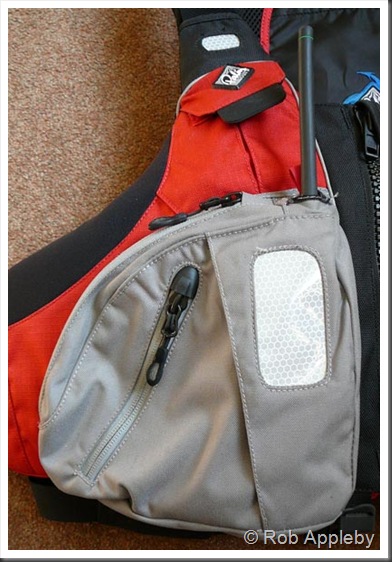 One reason I purchased the M33 was the claim that it floats, an important factor when kayak fishing!. It's something that hopefully wont happen for real, though just to check that it actually lived up to the hype, here it is floating away. 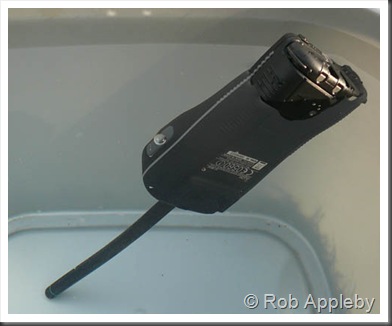 After three months of regular use it's still looking as good as new, a fresh water rinse post each trip no doubt aiding this. It's certainly a nice to have piece of kit, I don't consider it essential, I managed for over a year with a mobile phone kept in an Aquapak. However it is no doubt far superior in both it's abilities at communication, survivability in the marine environment, as well as ease of operation in an emergency situation.

If money hadn't been a consideration I would have pondered the Standard Horizon HX850S with DSC. Though for the distances I tend to fish, within 2 miles of the shore, I'm not convinced that I can justify the DSC functionality, as excellent as it is.

To gain a VHF license, a legal requirement to use a VHF radio, you are required to attend a one day 'Short Wave' radio course. The average cost, including the licensing fee, amounts to about £120.

To summarise, a worthwhile enhancement to safety and basic communications, and a quality piece of kit at an affordable price.

Hi, Rob
Well after reading your blog for the last few months I have taken the plunge and ordered a Trident 15 Angler. Like you I have been fishing ever since I could walk. As much as I enjoy beach fishing it has come to the point where I can no longer put up with catching rockling to win matches. So I have had a good clear out of my beach tackle to help towards the purchase of the Yak.
With all your helpfull articles, I'm looking forward to riging up the boat and catching some decent fish. I live in the Lymington area so have easy access to the solent and will be trying all those places I could never get to with a cast.
I look forward to meeting you out on the water.
Cheers
Rich

Hi Rich
thanks for the comments. You've bought yourself a good yak from what I've heard about them. Take it steady and you'll never look back!

Thanks for a very comprehensive review. Considering getting an M71 for use sea kayaking, to replace my M31 which packed up recently, and your article was very informative.
Cheers.
Billy.

Great review as usual and thanks for all the work you put in to them.

I was out on my first trip ever in my new fishing kayak with an experienced kayak fisher when we were caught in a bad rip. Thank god he had a radio with him, He called a mayday and we were rescued by the wonderful RNLI. It could of been very bad as he ended up in the water and the rip was taking us to the rocks on the South Stack Lighthouse in Anglesey.

This has bumped the priority of getting myself a radio but the question is do you need a licence to operate one?

Hi Neil,
by the letter of the law you require a Ship Portable Radio Licence which can be achieved by attending a 1 day course. The courses tend to cost £100 or so, though to be perfectly hones I found my course a waste of time. The majority of the course was dedicated to the DSC facility which very few hand held radios possess.

So legally it's required, though hows it is, or can be, effectively policed is questionable. Either way, owning a radio should definitely be on your priority list.

Thanks for all your tips and info, I find them really useful, especially the roof roller as I'm over 70 now and not quite as strong as I was!!
Going to west coast of scotland early next summer with my prowler, all part of growing old disgracefully.
Thanks again.