I was on the telephone early chasing down a pair of replacement front tyres. Fortunately I tracked some down quickly and an hour later they were getting fitted to the vehicle. The good news was that I’d be able to head off fishing once the tyres were fitted. The bad news was with the vehicle in the air it became apparent that the rear of the exhaust had fractured and could snap clean off without notice!. A replacement wouldn’t be available until the next morning so I chose to minimise my travel and forget the trip to Wales. I didn’t fancy another session in the muddy waters off Watchet so the decision was made to fish the clearer waters of Lynmouth. 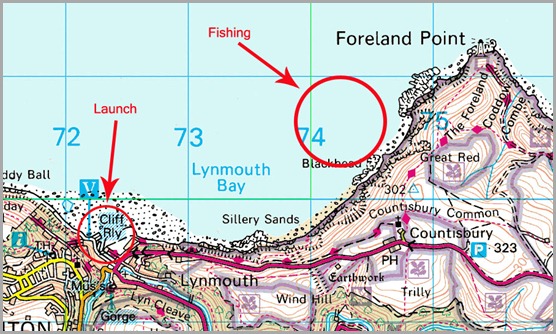 Sure, the Watchet area is almost guaranteed to produce plenty of fish, though it can get a little boring after a while. The real adventure for me is fishing new marks and different venues… ideally somewhere scenic!

The drive over Exmoor is a thoroughly enjoyable one and really sets the mood for a day afloat. The sun was shining and the wind was but a breeze. It was early afternoon by the time I was ready to launch. The tide had only just turned onto the flood. With the tide out I had to navigate the small river that runs through the rocky inter-tidal area to the sea. It’s quite shallow, not deep enough to paddle without risking damage to the hull of the kayak. To make life a little easier I attached my buoy leash to the rear carry handle of the kayak, allowing it to float itself downstream as I followed behind. 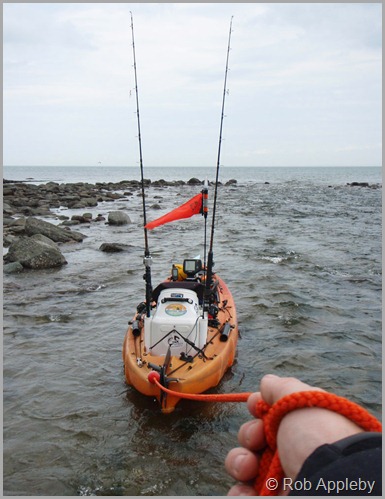 I paddled out towards the centre of the bay and tied off to one of the few lobster pot buoys in the area. I’d normally anchor, though the buoys were conveniently close to where I fancied fishing so I went for the easy option and tied off. I’d cleared out some old bait from my freezer, whole mackerel in the hope of Tope and squid for anything else that was feeling hungry. 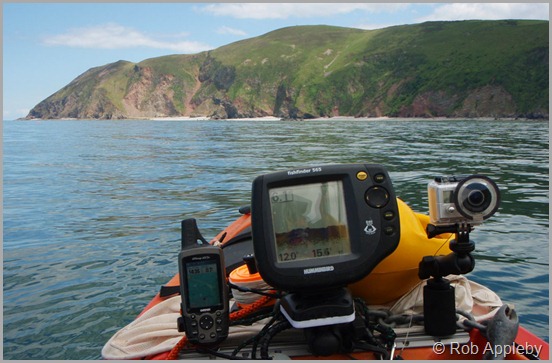 I dropped some feathers over the side and soon picked up a mackerel, it turned out to be the only mackerel of the session!. This was promptly dropped down as live bait with the other rod baited up with a large squid. I didn’t have to wait too long before line started to scream of the live-baited rod. I tightened up and felt the weight of a good fish. After another hard run the line went slack, despite allowing the bait to drop down, the fish failed to return. I retrieved the bait and on inspection there was an impressive set of teeth marks across the body, just short of the hook, a Tope for sure. Surprisingly, the bait was still alive so he was sent down into the depths once more.

Ten minutes later the bait was hit hard again, a shorter run than before and the rod was bending hard into a good fish. There was a lot of head shaking and short runs, though a minute later the fish swam free. It may have been a good Bass, perhaps a Conger, though it’ll only ever speculation!

I had two more Tope runs during the session, though rather annoyingly both were dropped. The dogfish were present in plague proportions and my bait supply was almost decimated after a few hours afloat. The tide slackened as high water approached and the Bullhuss came onto the feed, some being around double figures and providing a little welcome sport. 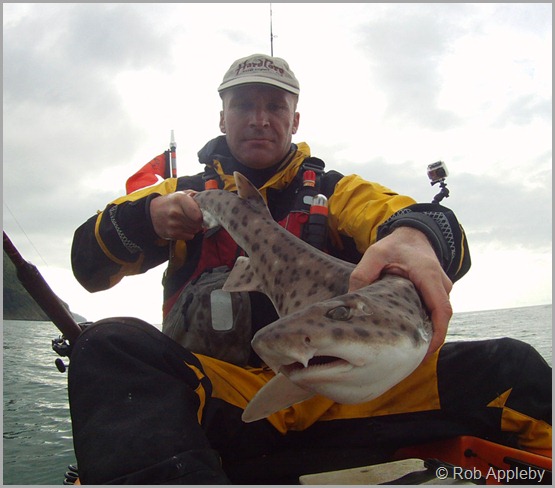 I returned into harbour during the ebb, no river to contend with this time, the higher water putting me straight up onto the slipway.

I pose the question as to whether it is really necessary to use live bait to achieve good fishing. In over 45 years experience I believe it is not. We can use fresh dead baits, frozen bait and a wide variety of lures and get great fishing to satisfy the hunting instinct, take plenty for the pot (dispatched quickly) but above all, treat our quarry with respect including the humble Mackerel which on the right tackle is one the finest fighting, tastiest fish in the sea. Sorry, but not necessary in my opinion.

I respect your opinion, though each to their own at the end of the day.

As much as many fish will scavenge food, for many species their natural choice is live food, whether it be worm, fish, shellfish, etc. For me, there's certainly a time and place to fish a live bait.

It could be argued that hook caught fish is just as distressed as a live baited fish. As a fisherman who is happy to hook a fish in order to catch it, as well as to hook a fish to be used as live bait, I'd consider myself a bit of a hypocrite to accept one as ok and the other not.

That of course is just my opinion.

I very much respect your opinion as well Rob and we will have to agree to differ. Your right it is the unnecessary and in particular prolonged stress caused on the fish. We catch fish and yes that causing them stress during the fight and the handling when they are either released or dispatched quickly for the pot. How long does a lightly hooked live Mackerel suffer before the eventual demise particularly if not taken quickly? It suffered the stress of the catch, the handling, the hooking as live bait and whatever time struggling down there until the end result.
With regards other live bait such as worms and crabs, are they fished alive? I would imaging that once a 6/0 hook is passed through the centre of a lug worm its dead. Likewise a peeler crab with a 6/0 right through it and then wrapped up in shirring elastic.
It’s true it’s impossible to fish and not cause some stress to fish or bait however, they are limits we can control and some methods (IMO) really are not necessary to obtain good fishing and that was my point to pose the question is it really necessary. You feel it is and that’s fine but an interesting debate.