The alarm clock sang out at 0500, let competition day 2 commence!. With breakfast out of the way and final rigging touches to the kayak completed, I soon sound myself afloat and manoeuvring into the start line….  deja vu?

Despite the lack of sizeable Perch on the previous day, the game plan seemed to have worked fairly well. Why change something when it’s not broken?. So I headed out again with Ian Harris and fished the same marks as yesterday. It had been clear talking to various competitors that many of the Pike that had been caught yesterday were caught quite early on, mine included. I was really hoping for an early Pike so I could concentrate on the Perch, perhaps even target the highly elusive Zander. None had been caught on Day 1.

I tried a few marks and couldn’t find a Pike, in fact I couldn’t even get a bite. I felt as though I was perhaps flogging a dead horse so I chose to move on to the mark that had produced Perch for me the day before. After trying a few more marks en-route, I was back in a familiar location casting a small crank bait. 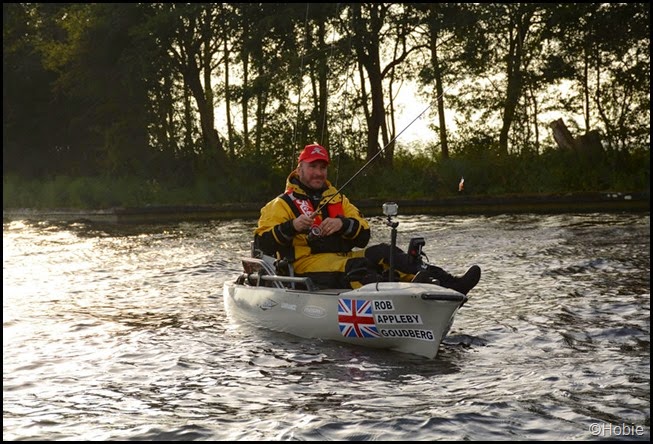 Guess what?, no Perch, not even a few tentative nibbles. I was beginning to feel a little frustrated and allowed myself to drift into a small harbour area, further than I had previously. Bang!, I was hooked up to something rather lively.

Taking care not to rush the fish I edged it closer to the yak and was grinning from ear to ear when I netted a small, but much needed Pike!. I drifted alongside a wooden jetty where I untangled everything from the net and managed to get a couple of photos of the fish… must remember that tag!.

It wasn’t a monster at 76cm, but it was much needed!. I could have continued to try for a bigger Pike, but I made the decision to go for Perch, you never know, I much just hook up into a Pike again!.

So I commenced the hunt for Perch and it proved extremely frustrating. I tried a multitude of marks and despite missed a few hits I just couldn’t hook into a fish. I eventually did catch a couple of perch, both measuring in at 22cm!!. I could have screamed. I fished margins, drop offs, around structure, where were the big Perch?.

Perseverance finally paid off when I hooked into what felt like a better sized Perch. I was all ready to lift it into the kayak until it hit the surface. It was bigger than I’d thought, perhaps 40cm. I really didn’t want to lose the fish so I fumbled around with the the folding landing net, I just couldn’t get the thing to open up!. All the time I had a nice Perch swimming around the yak. Eventually after some cursing the net opened sufficiently for me to use it so I swung it over the side. I eased the fish towards the net and ‘twang’, it threw the hook!. One things almost guaranteed, I taught every non-English speaking person within 200m of me several new swear words!. I was absolutely gutted!.

I kept on trying, though I failed to register another bite for the remainder of the session. I headed back once again to the start line to check in. Confidence was quite low, I’d really struggled to find any fish, the Pike was ok, though a lot smaller than yesterdays fish and after hours of trying for Perch I lost the only good fish I’d seen to date.

My Team mate Ian had been fishing hard but lady luck was clearly eluding him. 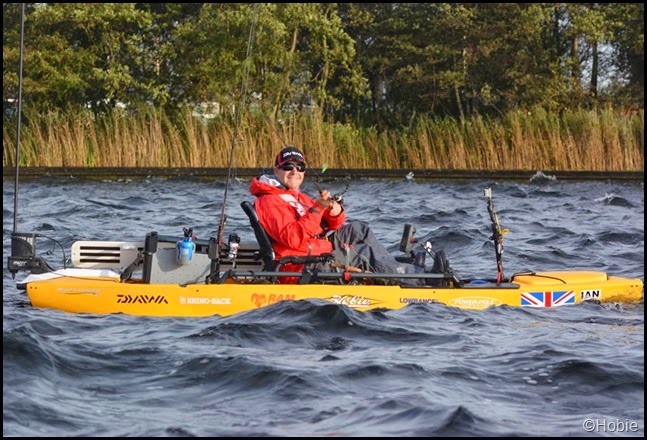 After checking in and chatting to a few anglers to see how they’d got on, I headed back and got changed ready for the evening meal and the Day 2 results. 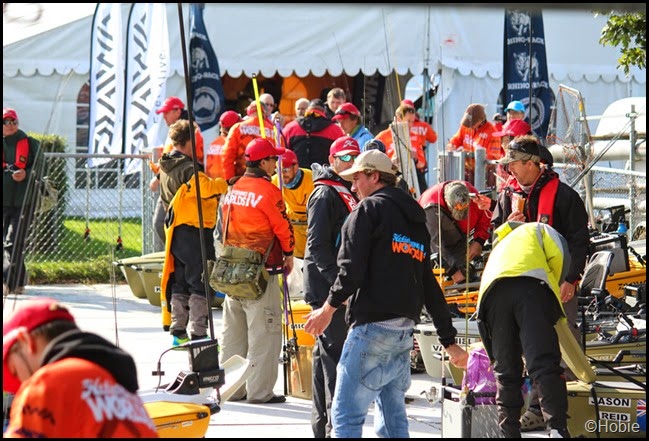 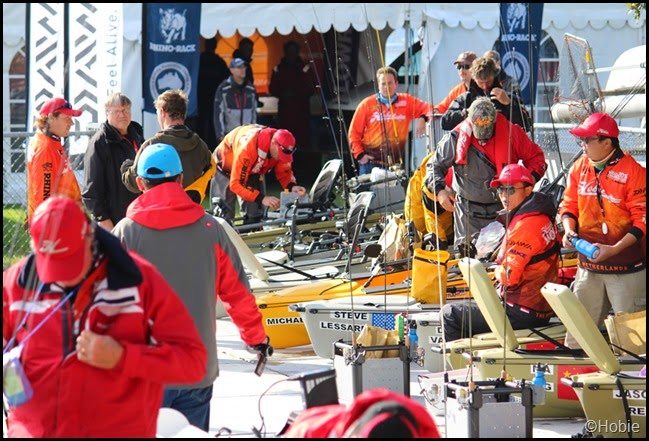 After another enjoyable meal at the clubhouse the Day 2 results were pinned to the board. Again, it’d been another day of tough fishing and my single fish had actually be a good result. I’d risen from 5th to 3rd place, I was quite amazed to be honest. Steve Lessard from the USA had increased his Day 1 first place lead and was potentially going to be impossible to reach if he caught on the final day, but I found myself only 6cm behind 2nd place. It really was all to play for!

Tomorrow was the going to be the third and final day, I needed fish to maintain my placing and I wanted them badly!. However, it was time for a few beers so we headed off to the local pub to enjoy a little much needed refreshment. 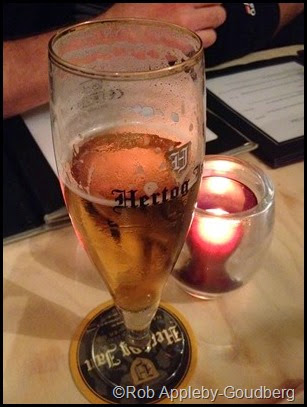 Part 5 sees me head into the final day of the Hobie Fishing World Championships.