With the navigation day completed the next event was Practice Day. Here we had a few hours in which to fish the water and try as many techniques and lures out as required. Again, I certainly found the sheer size of this venue so daunting, just where does one start fishing?!. 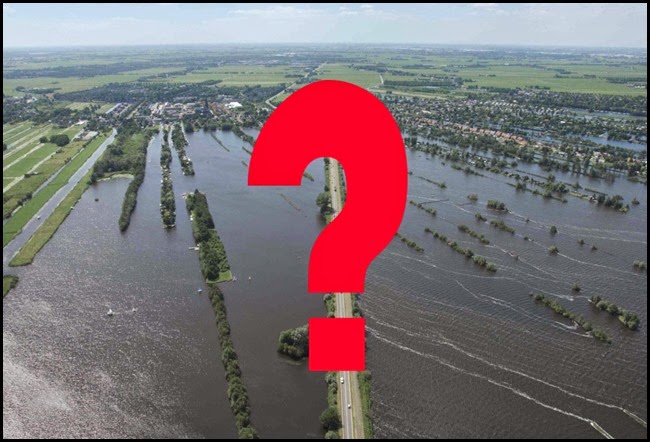 Well my game plan was to keep it simple. I’d taken a fairly small selection of lures out on the water with me, some shads, spinner baits, blades and a handful of small crank baits. I had three rods rigged ready to fish (minus lures), these were a light, medium and heavy spinner. Some of my lures were pushing towards 100g in weight, others as light as 10g, hence the variety of rods. A collapsible landing net was provided as well as a large measuring board to ensure that even the largest of Pike could be effectively measured.

The competition would allow anglers to fish for three species of fish, Pike, Zander and Perch with permitted lengths of 45cm, 42cm and 25cm respectively. One fish per species per day was the maximum sized bag (3 fish total max) with total length used to put together the leader board. Methods were cast-and-retrieve only,  with trolling, live baits and dead baits not permitted Only artificial lures and flies were to be used during competition.  Drift fishing was allowed, though anglers could only drift up to 50 meters between casts.

All qualifying fish had to be photographed using the supplied measuring board with the anglers ‘token’ being visible. It was the photographing of the fish (should I catch one!) that worried me most, failure to photograph it correctly would result in that submission being disqualified, something that did unfortunately happen to some competitors over the three day competition.

The weather forecast was extremely poor, with strong winds expected allied with frequent rains showers. It was one of those rare occasions when the weatherman got it right, or perhaps even unstated it somewhat!

The Pro Angler 12 kayaks were all outfitted with a Lowrance Elite 4 HDI fish finder/GPS. I currently have the Elite 7 HDI rigged onto my Outback so I was pretty confident in being able to get straight into using this unit as the menu configuration is almost identical. At first I found the smaller screen a bit of a step backwards, but it’s surprising how quickly you adjust. The screen is considerably taller than my previous elite 4 DSI, though it’s needed on this combination unit that can display up to a triple split screen. 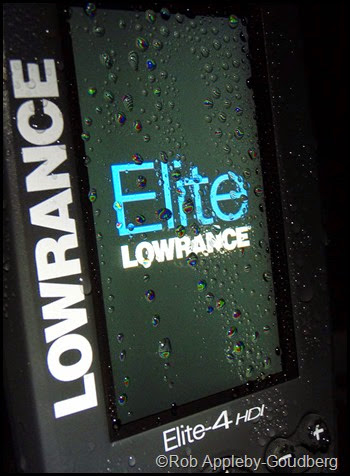 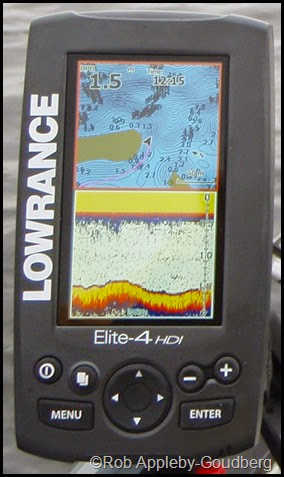 The units were loaded Insight Genesis mapping information gathered from boats used prior to the Championships. This proved invaluable as Navionics online provided no useful information for this venue. It’s  highly detailed providing the user with a very accurate underwater picture of the venue. If that wasn’t good enough, the individual kayaks recorded sonar information each day and the Lowrance representative updated the map sets daily so the available information was continually improving!

So did I have a game plan?. I planned to fish noticeable drop offs as well as areas with patchy weed in the hope of primarily finding Pike with a good chance of a Perch. The Zander were going to be difficult and were likely to be found in the deeper water. As they were expected to be very difficult to catch I placed them bottom of my wish list, placing Pike at the top followed by Perch.

I worked my way around a few of the suggested marks with Ian Harris and tried this and that, with little success. I eventually found a piece of water that was holding some Perch, though despite being small, at least I had started to catch some fish. I caught around ten small Perch during the session, though all were under the require qualifying size of 25cm, hopefully I’d find some bigger fish when the competition was finally underway. 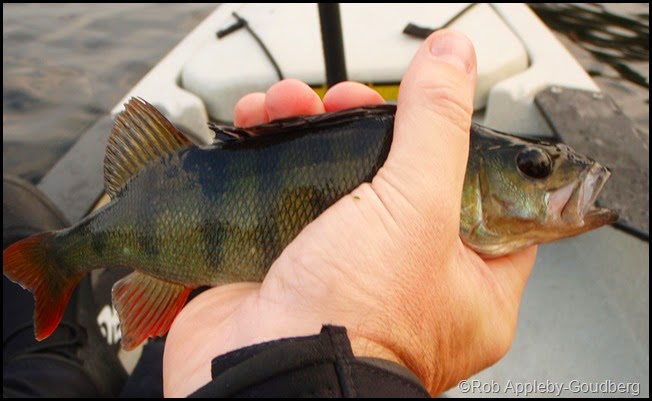 I eventually hooked into something far better, perhaps a big Perch or a small Pike, though I’ll never know as it threw the hook after a good tussle lasting but a few seconds.

The weather conditions had began to deteriorate and the ever increasing wind had began to produce white caps across the lake. I decided to head back in and took the shortest route directly across the lake, taking me over the deeper water. Yes, it was choppy and rather uncomfortable, but it was perfectly doable and I was making decent progress. Looking over to my right the sky darkened and thunder and lightning made an appearance and was heading all too quickly in my direction!. Before I knew it a squall came down the centre of the lake and I was getting pounded by large breaking swells. I pretty much lost control of the Pro Angler at one stage, though I managed to get it turned into the waves and swell where I intended to ride out the weather. Unfortunately I heard some shouting over the sound of the wind and rain and I soon found myself heading over in the direction of a capsized kayak. To say it was an exciting few minutes going across the swell is an understatement, though thankfully the angler and his kayak were safely recovered, no harm apart from some dented pride no doubt.

I was just happy to have made it out of the weather, finally taking a more sheltered route back to the start line via the more sheltered ‘canals’ that went around part of the lake… interesting times! 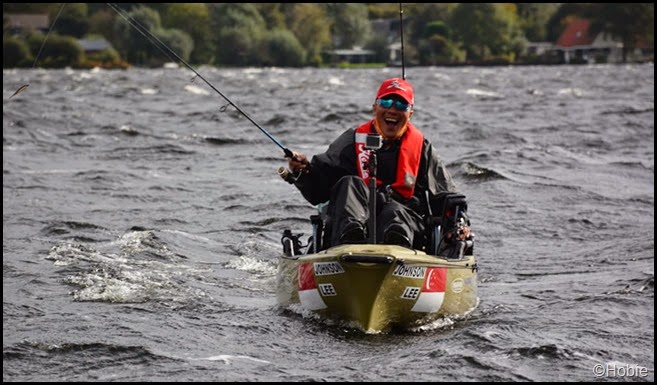 I think it’s safe to say that the fishing during the pre-fish day had been rather difficult, though there were some decent fish caught as can be seen below. 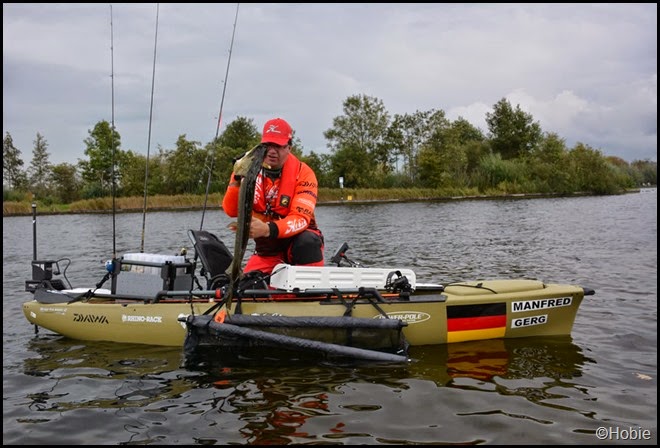 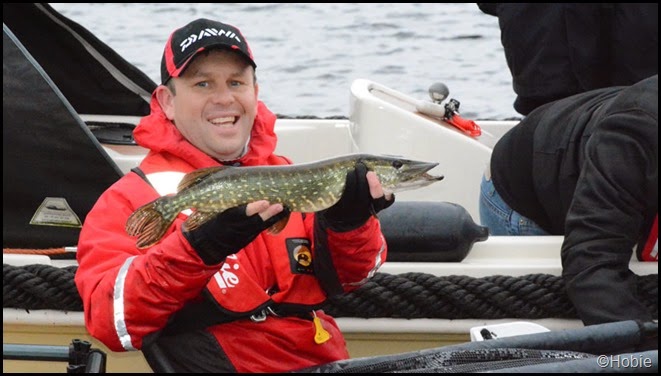 So with pre-fish out of the way the three day Championship was ready to commence. So who was the favourite to win?, well that honour was bestowed upon my friend, and current Hobie European Champion, Daniel van der Post. He certainly catches one specimen fish after another and is an extremely experienced local angler, though I’m not so sure that I’d like to have that pressure placed on me… though I can’t see that happening anytime soon! 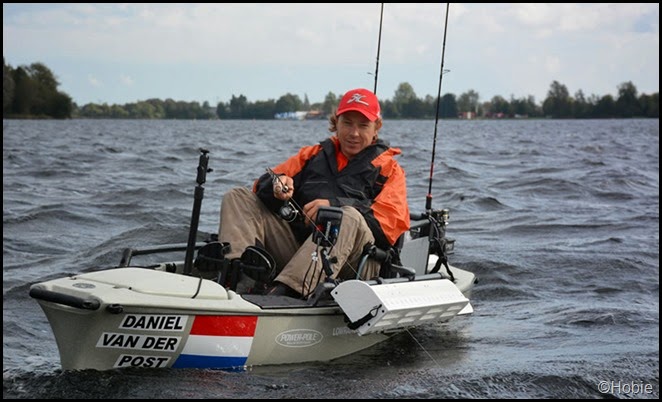 With a whole evening to ourselves, what do you do?…. socialise of course!! 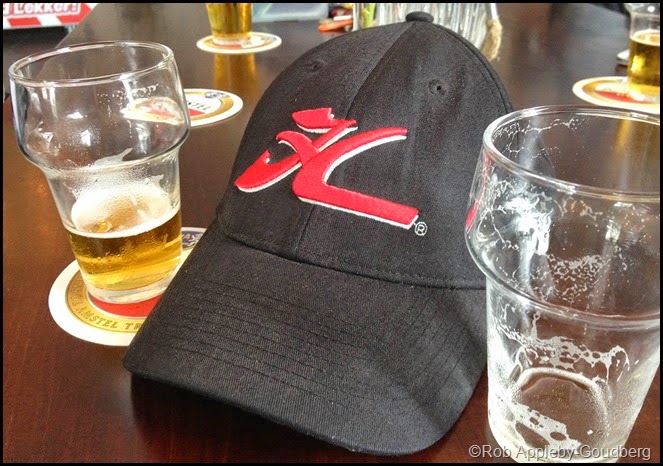 Part 3 will see me fishing the 3 day Championship itself.