Now I’m not really one for competitions, I used to be in years gone by, though not anymore. Sure, I fished at Oxwich for a species competition a few weeks ago, however, the real attraction had been trying out a new venue. Earlier last week Sam had mentioned about the Annual Cadgwith Fishing Festival taking place that weekend, perhaps I’d be interested?. I knew nothing about it, though as Sam was going to fish it I thought that I’d join him and double the number of kayaks taking part!.

I was there for around 7:30am and started to rig up and was a little surprised when Ian appeared. He’d been unable to fish his chosen venue for one reason or another and decided to join us for the competition. That bought the tally of competing kayaks to three, all Hobies!.

I’m not entirely sure how many people were competing, though it must have been forty or more. Cadgwith is truly a picturesque hamlet, what a cracking location for a competition! 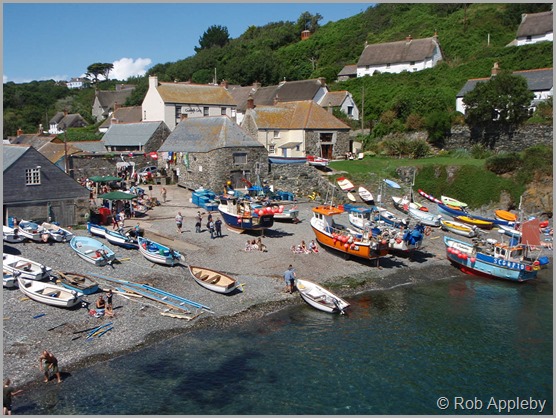 With my entrance fee paid I quickly perused the rules sheet. Prizes were available for various categories, heaviest Cod, Pollack, Mackerel, Wrasse. There were also awards for the best specimen, best junior prize and heaviest overall fish. There were a couple more though my memory fails me.

We launched at around 8:30am and the three of us stayed together, initially fishing close the to rocks in the hope of hooking into a wrasse. It wasn’t to be, though some Pollack were taken. We moved along the bay trying various patches of rough ground, though nothing was producing fish. Sam decided to try an offshore mark and he disappeared into the distance rather rapidly. I joined Ian and pushed further South, though the swell was gradually increasing as we left the protection of the bay. The swell had been around 3’, though it quickly increased to 5-6’. We continued to push towards the rough ground that we wanted to fish though the swell soon hit 7-8’ so we decided to turn back towards somewhat calmer water. 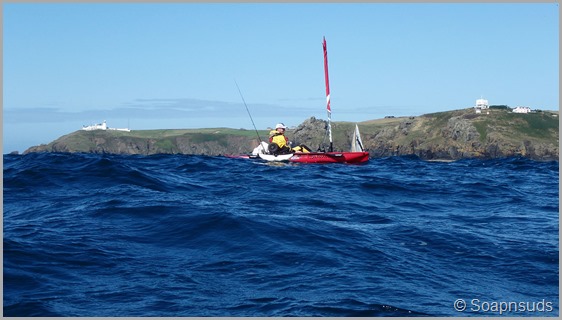 I’d fitted my sail and Sidekicks once again and after some consideration I decided to push back out towards the heavy swell. I was hoping that it would lessen once I’d passed over the reef and that the target fishing grounds would be fishable. I was starting to regret that decision as the swells rose up to 8’ or more at times. I repositioned the Sidekicks so they were permanently in contact with the water, thus providing tremendous stability. To be honest I was quite enjoying riding the swells, quite the kick. I reached the mark, though the swells were unrelenting. I started to fish anyway, the Outback was ultra stable and I was in my element.

Much to my surprise I saw Ian on his Revolution 13 carefully pushing through the swells, heading in my direction. We kept close and jigged deep for Pollack whilst drifting. Fish were being caught, I took a couple around 5-6lb, Ian seemed to be catching a steady stream of fish and clearly lost a very good fish at one point. It’s very difficult to take a photograph from the kayak that actually does the sea conditions justice. However, the photo below seems to come close. Ian is perhaps thirty metres from me and his rod tip is just visible. 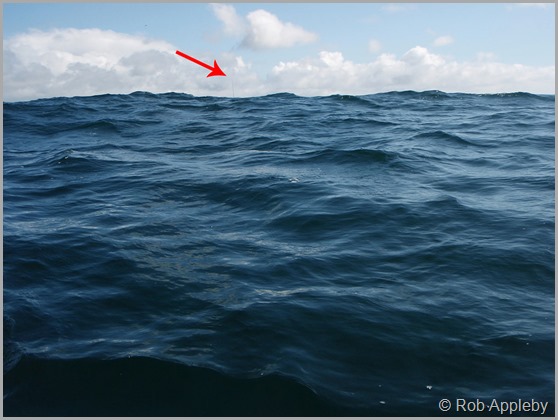 Thankfully the weather began to ease off and gradually the swell began to lessen throughout the morning. Sam appeared from nowhere and joined us to fish the mark. His offshore mark hadn’t produced anything worthy of note, hopefully with the improving conditions we’d have some better luck.

I managed to pick up a couple more Pollack, nothing big, though the fish are generally in superb condition. I’m really enjoying fishing deep with heavy jig heads. The takes are often  savage and the ensuing fights are quite exciting. There’s no better sound than line being stripped from your reel!! 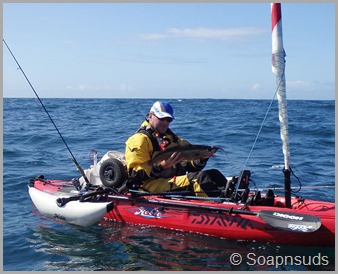 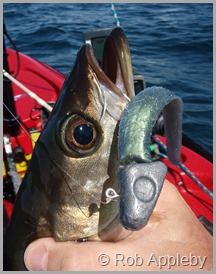 We were all catching fish which was a great thing. Ian was constantly hooking up and releasing a steady stream of fish, he’s quite the angling machine. Below is a photo of Sam hooked up into a lively Pollack. 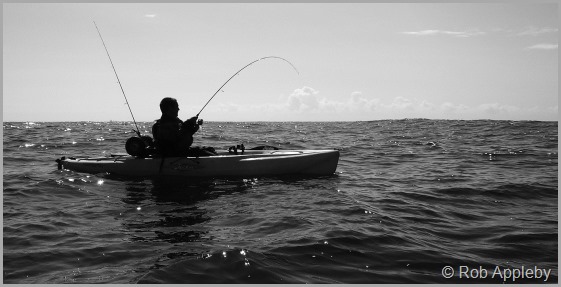 I’d drifted off the rough ground and decided to continue my drift over an area of what appeared to be sand on the fish finder. Why?, to be honest I was being a little lazy and could see from the GPS that in a few minutes I’d be hitting another area of rising rough ground. To my surprise the lure was smashed and line started pouring off the reel. It was a big fish and I was in no rush to get it to the surface. It made several hard dives and I found myself continually adjusting the drag on the fixed spool as it was clearly providing more drag as the fight continued. I’m putting it down to the drag washers heating up and expanding, though it wasn’t exactly ideal!

Eventually I started to bring the fish towards the surface and I was grinning like a Cheshire cat when a large slab-sided Pollack appeared from the depths. It dived hard when it came close to the kayak, this was not a fish that I wanted to lose!!. I stayed calm and just let it tire itself out and it slowly came back towards the kayak. It was a big relief when I lifted it onto the relative safety of the kayak. It was an absolute cracker of a fish and at the time I guessed the weight at around 11lb. 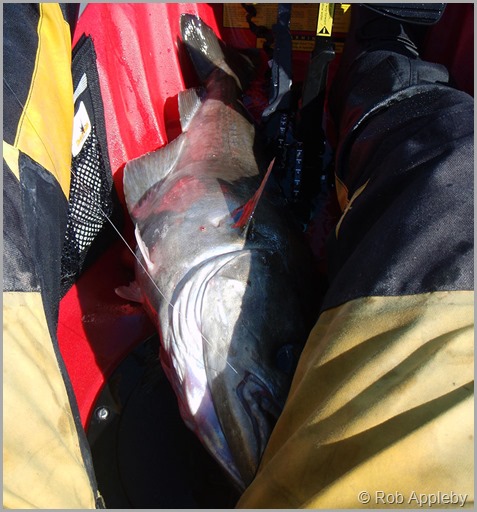 Ian peddled over and kindly took a couple of photos, just as well considering my GoPro remote battery had oddly showed up as flat at the beginning of the trip, hence no GoPro. 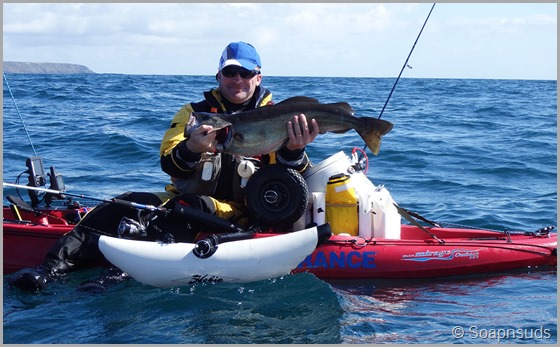 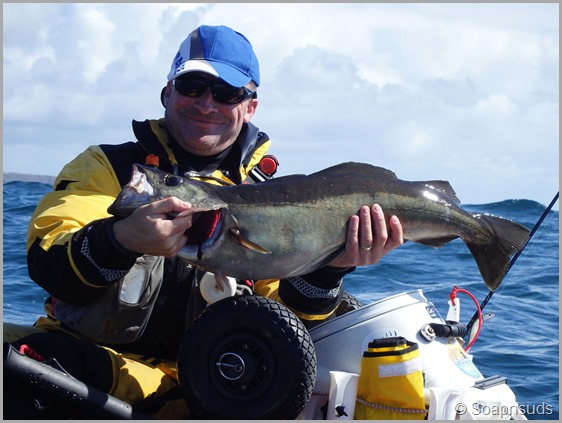 I hate keeping fish inside the kayak as it tends to stink them out, however, I was taking no chances in losing this fish so I shuffled forward and slipped it straight into the front hatch. I managed a couple more smaller fish, though to be honest I was highly unlikely to better that. When Sam headed in I decided to follow suit and have a spot of lunch ashore with a view to heading out for a couple more hours in the afternoon. The wind had picked up once more  and it’d mean peddling back into a stiff breeze and through choppy water. Not a problem, I unfurled the sail and set a direct course for Cadgwith. The kayak pushed along at a steady 4mph whilst sailing quite close to the wind. Sailing and fishing is proving to be a great combination!. 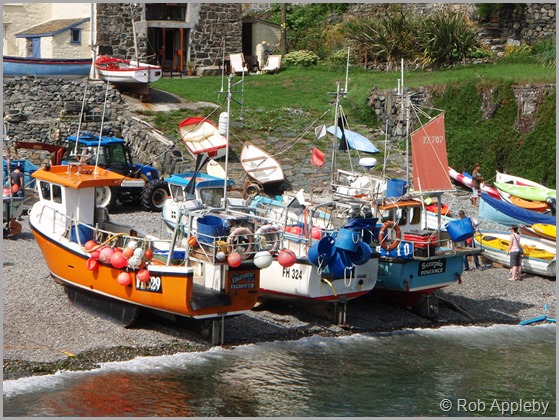 Once ashore I grabbed some lunch from the local shop (I’d not been organised in the slightest!). With a good fish in the hatch and some food in my stomach I decided to sit out the rest of the competition and just enjoy the festival. There was food and drink available plus a few stalls. With a really good turnout of people the atmosphere was great. The sunny weather eventually departed and was replaced with ominously black clouds. Sure enough rain followed. Sam found himself some convenient cover as can be seen in the photo below!. 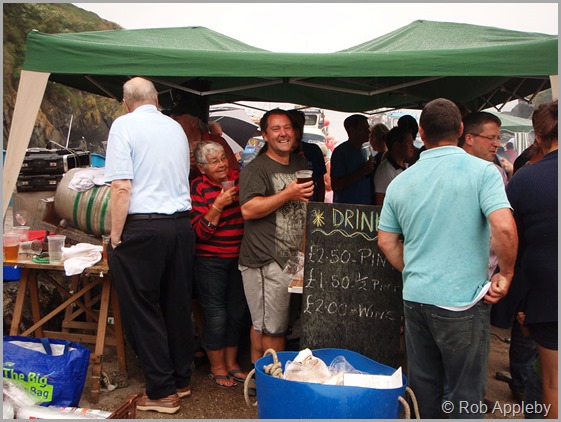 The competition was drawing to a close and all catches needed to be weighed in by 5:30pm at the latest. A couple of boats were clearly cutting it close as the came steaming into the narrow cove. I’d weighed my Pollack when I came ashore using my Rapala digital scales and weighed in at 10lb 15oz, very close to my original guess. Sam did comment that it was a long fish, more akin to a fish weighing 13-14lb in peak condition.I took the opportunity to weigh the Pollack that Sam had kept, he reckoned it was 7-8lb and he was suitably disappointed when my scales were showing it as under 6lb. Anyway, it was time to officially weigh in. 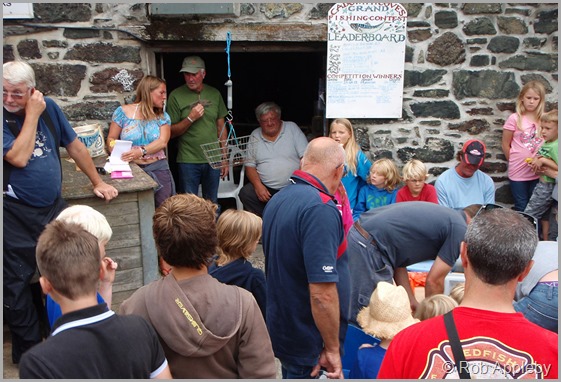 When my Pollack was placed onto the scale I glanced at the readout expecting it to have lost several ounces as a good few hours had passed since its capture. Much to my amazement it weighed 13lb 4oz!, that was closer to what Sam thought my fish should have weighed and put his fish exactly in the weight bracket that he’d expected. So my Rapala scales were under-weighing by well over a pound!. I’ve weighed dozens of good fish over the years using those scales, I wonder if they’ve been wrong since I purchased them?, rather disappointing.

On a plus note it was looking quite likely that my Pollack was going to have a chance of winning its category. As it turned out it did, the next biggest Pollack coming in at around 11lb. What was even more pleasing is that is was the heaviest fish of the competition!. 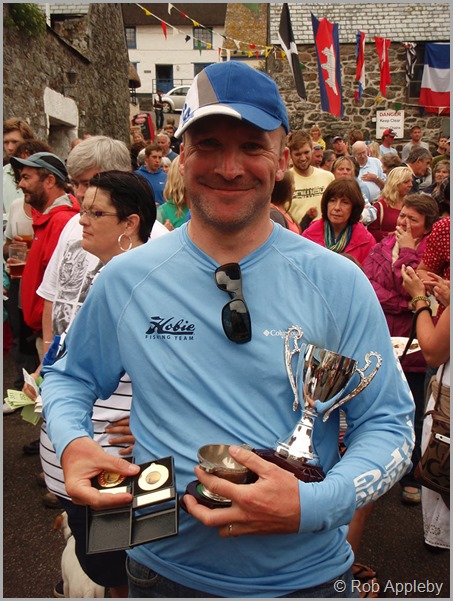 To think I’d considered not entering!. I felt a little guilty walking away from a local competition carrying trophies for heaviest Pollack and Heaviest fish overall, but hey, I’m sure I’ll get over it in time!. It was a good day for the kayak fisherman, just goes to show you that you don’t need to be on a boat fishing offshore wrecks to be in with a chance of catching a good sized fish. Next trip will see me trying for a Gilthead Bream, I’m not holding my breath!

Nice fish rob, just want to thank you for this blog it inspired me to get out on my kayak and fish :-) caught my first fish this weekend in Southampton water was only a little bass but the satisfaction could not be better

Nice one!, sometimes just getting out there on the water is a great thing.